I wrote in mid-January that we had several days of heavy, warm rain, three inches in the last 24 hours, and that all the creeks were very high. This was on a Tuesday and Bob had been gone again and hadn’t gotten home Friday as he originally intended because he had spent the night with Candy, Jim and Carin in Fresno, where they lived at the time and had come home Saturday. We were concerned about our bridge. 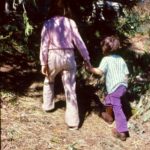 On Sunday he had taken Jeffrey to see the movie Mary Poppins and Jeffrey had come home “just glowing”. Rebecca, Clarke and I watched Wild Kingdom and Disneyland on TV and I’d made popcorn and joined them the last half hour.

Doris made knit hats for all three of our children, which they loved. When I went up to visit her for about an hour and get the hats, I’d left the older two home by themselves for about half an hour after they’d come home for school, calling them about 15 minutes after they arrived to tell them where I was. Clarke had been with Florence.

Kinnik-Kinnick had run into a skunk Sunday night and had to sleep outside. Bob and Jeff had seen three of them when they came home from the movie and Rebecca, looking out the window, had seen two.

The following Sunday was warm and sunny and Bob had left that afternoon to go to Sacramento where he was staying overnight in order to fly to Bakersfield and not be back until that Friday. The previous Tuesday and Wednesday there had been lots of local flooding. Oregon Street washed out beyond us, where West Weaver goes under the road;the bridge across to Timber Ridge was washed out around the supports; Wilkins lost their bridge, etc. Several houses were flooded out East Weaver. Mrs. Rourke couldn’t make it to school because of water from Oregon Gulch. 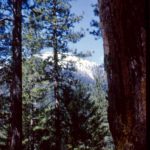 Bob had gone out to look at the ranch road (Jeannie Meyer, Clarke and I had driven over to Junction City to look at the river). The two culverts above Walden’s were in bad shape. He was fortunate in going, to see Scoot Miller who helped get Jim Pruitt to go in with a backhoe and then get two fellows from the Big Bar Station to do some shoveling and to babysit the culverts off and on during the night. He walked clear into the ranch. The bridge was ok but water very high. He said he was going to have to redesign the bridge and possibly its location as a result of seeing it with high water. The road was impassable due to the culverts above Walden’s.

Rebecca stayed overnight Thursday with Van Duyns and John spent the afternoon with us. “Jeffrey and John came in coated with mud from sliding down one of the banks here. What a mess! They had to change their clothes while I washed and dried their muddy things. They must have thought they were otters or something.” When I took John home Marilyn asked us to stay for dinner and we did, arriving home around 8 just as Bob got back from another trip out to check the culverts.

There were lots of pictures in the Record Searchlight of Dunsmuir and Castella being flooded. I sent them to my parents.

Florence, Leonard and Scott left on a trip to Mexico.

Clarke had wanted to go to Linda Lindsey’s after nursery school on Tuesday so I called Linda first to make sure it was ok and then sent him with Barb. Had fifteen minutes to myself before Jeffrey got home. It had been a pretty good day at nursery school—finally got all the children together and we sat on the rug and talked and sang a few songs, played a few games. I spent most of the morning helping them nail blocks together for houses. Did that Sunday afternoon with Rebecca, Jeffrey and Clarke and then they painted them a few days later.

I was reading Anne Morrow Lindbergh’s “Bring Me a Unicorn”.

In a phone call on Wednesday Bob said his paper that he had presented had gone well.

The children missed the bus that morning and I had to take them to school. In late morning I took Clarke to Linda’s and went over to the school to pick up Jeffrey and take him to lunch (I think we were trying to give him some extra attention for a while. My memory is that he was having a bit of trouble with being the middle child plus his dad being gone so much.)
“We went to Babe’s Café, where he had a hamburger and I had a bowl of soup. I talked with him more this time—he seemed happy though, watching everybody and munching. He kept getting mustard and catsup on his nose, which he thought was very funny—wiped it off repeatedly with many giggles. “ Went back to school and dropped him off. Went to Rebecca’s room where I talked to Betty Rourke for a few minutes. She said she didn’t need me that day.

Chinese New Year was that night. I’d thought it was the next month. So I took Rebecca and Clarke and went to the grocery store to get tangerines, marmalade and oranges, leaving Jeffrey on his own for a short time watching TV. He needed to be able to do that once in a while, being responsible for himself. I fixed up a small basket with the fruit, marmalade and an orange candle and then walked across the street to Moon Lee’s. Rebecca had gone to some function with the Meyers and came with them a little later.

That Thursday half of the nursery school class went to Varney’s Candy Kitchen.

Candy, Jim and Carin arrived Friday night around midnight and slept in sleeping bags in Bob’s shop. Saturday they went down to Big French Creek with Bob to hike up to the Stygar place while Carin stayed with us. Fortunately Rebecca pitched right in and helped keep the younger ones occupied and I was actually able to get some more work done on the trunk that I had had on the porch for two years. They went home Sunday. They were easy people to have for company. Jeffrey lost his first tooth while they were here. “Carin was most impressed.”

Sunday Bob and I left around noon, leaving the children with Patty. We ate lunch on the big rock down by Walden’s. Bob had brought a Honda so he wouldn’t be overdoing it with his knee two days in a row. I walked most of the way in and out but rode some.

There was a washout above Walden’s where a culvert overflowed and ran down the road, then ate away from the outer edge near the spring. “When we got up near the house Bob was ahead. I saw the Honda parked near the big fir and at first glance thought a big branch from the tree had blocked the road. I heard rocks coming down the culvert and thought Bob was working on it and I just hadn’t seen him. I went back to look—he wasn’t there. I noticed that the water was muddy and figured he was working on the next culvert up. Went back to cross over the “branch” and discovered it was a tree. “I thought I had somehow gotten on a wrong road—there was a huge washout in front of me and it was the cause of the fallen tree. I scrambled up a bank and went up to the first culvert below the house where Bob was knee deep in water, searching with a shovel to clear the culvert. He had diverted the water from running down the road and had water running right across. I went up to the house and got a shovel. Went up and down a number of times checking on the lower culvert to be sure it wasn’t plugged. It took Bob a couple of hours to get all the rocks, silt, etc., flushed out. We went up to the spring to check it. The old reservoir had about five feet of water in it and some was seeping down the road. “

“On the way home we stopped to see Scoot and Florence Miller. Scoot is going to start doing work in the springtime for us. That washout is 15-20 feet deep. It cut the turn off. The tree with the sign that said “Private Road” is in the bottom of the gulch.” 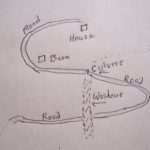 That Tuesday Clarke got really sick with a stomach ailment and was very ill for about a week. He looked terrible and slept or rested with his eyes half closed. No little potbelly, ribs sticking out. Spent a lot of time coaxing him to sip a little liquid. Bob was out of town until Thursday night. I was in touch with the doctor and administering suppositories.

Saturday Bob walked out to the ranch and back with Scoot Miller deciding what to do about the road. “Scoot was really impressed by our washout.”

I went out to go to the grocery store and the VW wouldn’t start. One of the children had left the radio on. So I took Bob’s car instead. He had put the charger on and around 4 it was charged. Clarke woke up a couple of times that night. I slept in until after nine on Sunday. At noon Clarke fell asleep and I took the camera, an apple and a box of matches and thermos of coffee and went for a walk. Drove up to Bagley’s and walked up the trail, taking the left turn. I ended up way up on the mountain, maybe almost to the La Grange Ditch? “I will have to ask Florence or Bob Young where I was.” Started off in the fog but by the time I stopped, around 1:30, I was up on a ridge and the fog was burning off. Had a wonderful time—mostly new trail– no one needing me for three hours. Dewey spider webs, water bubbling out of gopher holes in grassy places, green fluffy moss from ground level to two or three feet up the oaks; melting frost raining off the digger pines as the sun began to warm things. Was getting up higher because I’d passed through cedars, ponderosa pines and Douglas firs. I paralleled Garden Gulch for a long way, then turned right and went up a draw. I took my jacket off and lay on the ground panting, looking up at swollen oak buds against the blue sky—for a minute the earth moved without me—could see the trees going! Could see Monument Peak and another mountain across from me. The trail appeared to angle down to the left into another gulch. Had my coffee and apple there and then headed for home. Lots of old mining ditches up in there—gets kind of confusing.

Clarke had been ok all day, very tired but had a piece of French toast, liquids, etc. in small quantities. He almost fell over when I was brushing his hair that morning, he was so weak.

Bob said this morning that when he was chasing the kids out of his “shop” so he could pay bills and work on income tax, that Jeffrey said, “Well I guess if Daddy can’t pay the bills they’ll come and take everything away from us, even my blanket.