Child rearing is a learn-while-doing enterprise. Sometimes you make the right decision, sometimes you don’t. If you’re lucky you have books that help, or even better, helpful older friends or relatives.

Reading this now is a reminder of how little sleep one gets with small children. Many nights had interrupted sleep and mornings were early. Plus parents get many of the colds that their children manage to come down with. There were sometimes a few perks to that interrupted sleep stuff. Once when I was up in the middle of the night with one of the children I saw a striped skunk on the front porch moving back and forth with its nose to the concrete.

Rebecca, looking at a tall pine tree, decided that if she could climb to the top she could probably touch the sky. She had a generally cheerful disposition but was very insistent on doing things herself, including opening heavy doors at the post office.
Sometimes she wore the little pack that I made for her to carry her dolls, or whatever. She usually carried “Friend”, a red-haired, soft, stuffed doll that someone had given Jeff when he was born but that we had decided she needed more than he did at the time. Reading the journals I can see that I’m writing about Rebecca a lot more than about her brother but she was mobile and talking while he had just begun to move around on his own. And I can also see that the first child just naturally gets more coverage—everything is new for the parents. Do parents of five children say “Oh, yes, George (child number 5) started walking last year some time?”

The Ranch
Vernon Ryan called to tell us the insurance company would no longer cover the ranch in case of fire.

Time Goes By
Aunt May (Florence’s aunt) died on the 23rd. The hospital called to tell us at 11:30 p.m. because they’d not been able to reach Florence and Leonard who were out of town. They were back shortly. She was 86. I remembered a story Aunt May had told me about going to her woodbox one time and, when she opened the lid, finding a rattlesnake. She ran back into the house, got a teakettle of boiling water and killed it. Her funeral was the first I’d ever been to. I decided I didn’t want an open casket at my funeral. (I just read Aunt May’s obituary in a binder of newspaper clippings from the past that I’ve saved and I read that she had two children who died at 6 years old and 18 months from measles and whooping cough, which might be of interest to anyone involved in the current controversy over vaccines.)

Thanksgiving dinner was at Florence and Leonard’s. Afterwards everyone had places to go so Florence washed the dishes and I dried. I’m assuming Bob and Leonard watched the children. Afterwards, when we got to our house, we realized the doors were locked and neither of us had a key. We went into the addition and there was a window into the kitchen (that used to be to the outdoors). Bob opened it and lowered Rebecca down between the freezer and the refrigerator. He gave her a flashlight and she made her way into the living room to let us in the front door.

One of my notes mentioned that we had too many presents to give and not enough money so I tried to make some of the Christmas gifts. I sanded and painted left over wooden blocks from the addition, sometimes going out into the garage to paint them after the children were in bed. I also made a jumper for Rebecca and a matching one for her doll.

Florence and Leonard brought over a few things of Aunt May’s for us including Sudworth’s book, which I was delighted to have. The book, “Forest Trees of the Pacific Slope”, was published in 1908 and is a U.S. Department of Agriculture, Forest Service publication by George B. Sudworth, Dendrologist. At the time it could be purchased from the Superintendent of Documents in Washington D.C. for 60 cents. Gifford Pinchot was Forester then. Aunt May’s signature is neatly written in the front, Clara M. Richards, Lewiston, Calif. Today I still think this is one of the best tree books that exists. Sudworth explains that Dr. C. Hart Merriam was very helpful in establishing distributions. 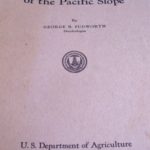 The illustrations are quite wonderful and the each species has detailed descriptions about where they may be found. For instance, in the case of the Weeping or Brewer’s Spruce: he names the parts Oregon where it was found at the time—east end of Chetco Range in Josephine county between 4,000 and 5,000 feet Sucker Creek and high mountain tops south of Rogue River (north slope of the Siskiyous). He is equally detailed about Trinity County locations, including head of Canyon Creek and others.

Also between the pages of the book was a leaflet from Better Homes and Gardens, dated 1933, entitled How to Identify the Evergreens. And a note on page 165 by the Macnab Cypress where it’s written in pencil “Between Shasta and Whiskey Town”. At that time it was a rare tree. Not sure now. It makes me wish I’d known Aunt May better. Why did she get that book? What was her interest? 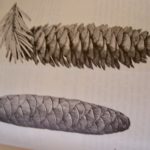 One evening Florence and Leonard came over to babysit while we went to see the movie “Guess Who’s Coming to Dinner” with Sydney Portier and Audrey Hepburn. We sat with Doris and afterwards went to her house for coffee, cake and conversation. “A very enjoyable evening”.

Bob left on Dec. 12th to go to San Francisco to see a Professor Linsley at Stanford about desalinization. I don’t remember what this desalinization event was all about but think he was probably thinking of some kind of invention. He brought home a book on butterflies for me, a little red, white and yellow Stanford owl for Rebecca and a stuffed Santa for Jeff.

One evening at the Ohde’s, Doris and I had a long discussion about raising children. “with world affairs as they are now and our own brink of “race war” condition. She feels that our children will have to pick up the pieces and that we must work hard to teach them to judge others and events only on the basis of their own knowledge and not to be led by a persuasive speaker, etc.”

We went to a school board meeting and came home reeking of cigarette smoke.

December 17th I took the children to Jan Hooper’s and substituted at the high school—study hall all day (I’m sure that was not fun!). That plus coffee, plus being up too late the night before left me exhausted. Rebecca seemed to have had a good time but Jeff apparently spent the day looking for me. I also subbed two half-days the previous week.

And There Was Snow
Florence walked through about a foot of snow to our house all the way from her house to watch the kids. I took the truck to get chains put on the rear wheels, got a haircut, bought some groceries, got chains put on the front wheels and came home. Later I took the children to the doctor—both were on the verge of tonsillitis so we got prescriptions.

On another night we invited Florence and Leonard, Alice and Horace, Peter and Angenett, the Wilkins, Herb Upham, the Ohdes, and Dixon and Heather Jones, to our house. The Ohdes walked all the way from their house as did Alice and Horace– who stayed only an hour and then walked home to take care of grandchildren so Peter and Angenett could come. As Ohdes were leaving the lights went out. Peter, Angenett, Dixon and Heather stayed for a little more wine punch and cookies and listened to Bob play his banjo.

With no power for heat or lights we moved the children into the living room and had to wake up often enough to keep the fire going in the fireplace. Still no electricity the next day and around 11:00 our water stopped. Bob went up to the reservoir to try to start the syphon. I started briquettes going in the broiler (?) and we were able to have hot coffee and soup for lunch, after a cold breakfast. By now there was two feet of snow in Redding and some roofs there had collapsed.

The next day Bob went down to Austin’s and borrowed their little generator to recharge our refrigerator and freezer. That night (Christmas Eve) we cooked hamburgers in the fireplace with a hand grill. Rebecca slept on the couch again—Jeff in a porta-crib– and somehow Santa filled stockings and distributed presents without disturbing anyone. About 7:00 a.m. that morning all the lights went on.

My mother always made handmade Christmas cards, printed from linoleum block prints that she designed and printed herself. She had so much artistic talent! I’m including one of them in this article. I have copies of many of them and someday hope to share. 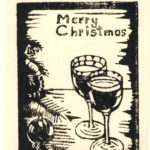 We had filled the laundry tray with water when the water had started running low and I forgot about it. The washing machine drained into the laundry tray and the forgotten water ended up all over the floor and into the kitchen where a lot of it ran under the freezer (which was set into a hole in the floor) and then to the ground.

On the 27th we got Janet Anderson to babysit and we went to the Joneses and watched the special programs on the astronauts’ trip—10 times around the moon. “The pictures of the earth were really something—not like a globe with supports at both ends—just a shining ball against a a black background. We had coffee and dessert and Bob and Peter argued “reality versus meaning” until midnight. Lots of fun.”