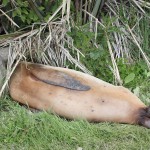 At 9:00 p.m. a fire alarm sounded and a pre-recorded voice told us to evacuate.

November 28th and it had been another long day. We met just before 8 a.m. and rode in the motel van from our motel on Stewart Island to the ferryboat. A bunch of school children were also catching the boat–3rd or 4th grade–who had visited at least one night and were going home. The trip took about an hour. No cars on these ferries, just people.

Then we got on a green bus that would take us to the airport to get the luggage we’d left and where we’d get our own van. The bus driver made one special stop. He went up a side street, beeping his horn as we passed a residence then turning around to stop in front of Bill’s house. Bill, who was all dressed up, was quite old and, using a cane, could take only tiny steps. The driver walked up to Bill’s doorstep and very, very slowly walked with him to the bus. There was kind of a collective sigh from the passengers as we waited although one person said, “I guess some day we will be at that stage.” When they reached the bus the driver told him “lift your right foot up”, etc. for the two steps. Bill was apparently a  frequent rider. Then, finally, off we went.

At the airport, we got our stored bags, transferred them to the van, and drove to find a café to get sandwiches and a drink to have later for lunch.

Back in the freedom of our van we drove toward the southeast corner of the South Island, to the Catlins area. Along a river we saw many little houses, tiny, some that had been in families for generations. People stay there when they are white-fish netting and the buildings are a regulated size. At Curio Bay one may see yellow-eyed penguins but we didn’t see any when we stopped there. A large area of exposed rock along the beach included petrified wood. Eons ago this was a lush tropical forest. Volcanic eruptions produced silicates that preserved the wood. Today this is considered an “extensive wave platform.” 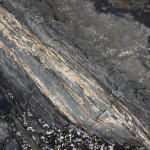 It was cold and windy and hail pelted us as we came back up the stairs from the beach. Flax grew in dense thickets along the top of the bluffs. As we headed toward a shelter to eat lunch we passed by a sea lion— way up there! It had its head hidden in some shrubs but entire body exposed, probably thinking if it couldn’t see us no one could see it. After lunch we drove another long distance going past the Catlins Coastal Rain Forest Park. A truck loaded with bales of wool went past us.

We took a short coffee break at Owaka “place of the canoe”, a little town just after a lake where we had seen many black swans and a couple of spoonbills. Along the main street in Owaka was a teapot collection decorating someone’s yard, which added a bit of whimsy. 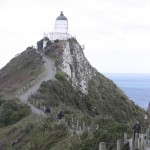 ide trip in this area included hiking up to Nugget Point Lighthouse where we could see New Zealand Fur Seals and an occasional albatross. The Nuggets are a series of nearby rocky islet 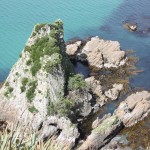 s. The lighthouse is out on a rugged point where the waves break dramatically, coming from two directions. Two different kinds of seaweed were evident here as well.

Our final stop, before going to the Cargill Hotel in Dunedin, was at Cannibal Bay where we got close to some New Zealand sea lions, probably the world’s rarest sea lion. They are very large and one is warned to not get too close because they can move rapidly when annoyed, up to 20 miles per hour. Tom got a little closer to one (pictured) than perhaps he should have and 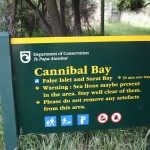 it reared up from its prone position to look directly at him while both Derek and I were yelling, “Tom get back!” He did back up and the seal lion relaxed. Whew!

At the Cargill Hotel, room 115 was our landing spot for the night. Rooms were around a nice courtyard filled with flowers. At dinner we were able to enjoy, those f us who love them, bagpipes played by a kilted bagpiper, who was accompanied by ano 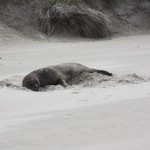 ther bearded and kilt-clad fellow, playing for a group celebrating a haggis. Haggis is a Scottish dish (containing meats, spices and oatmeal) celebrated by Robert Burns in his Address to a Haggis, and a celebration includes Scotch whiskey and recitation of Burns’ poetry. Cultural events are often celebrated with a haggis. In the olden days the meat included the cleaned stomach of a sheep stuffed with the other ingredients before cooking!

So here in Dunedin we celebrated Thanksgiving with some of us having salmon for dinner. A small piece of cake with a candle on it was brought out for Derek, and words of praise spoken, to thank him for the good time we had all had on this trip.

At 9:00 p.m. a fire alarm went off and a voice told us to evacuate. Tom wasn’t in the room and I had just read a description beside the alarm on the wall that instructed inhabitants to push a button beside the now blinking light if your shower had been steamy or you’d forgotten there was no smoking in the room—that button would shut the alarm off. I had done neither the steam nor the smoke but kept pushing the button before deciding it must be an overall alarm and exiting the room. I joined the other denizens of the hotel in the dark in front—some of our group in pajamas, some who had simply thrown on a robe as they’d been about to get in the shower, some still in street clothes. There was much milling about, talking and laughing, along with an undertone of worry as a fire engine pulled up making the situation a bit more serious. It was a false alarm though as someone, not one of us, had let a bathroom area get too steamy and the alarm had gone off. That was the story anyway.

Before the fire alarm, Tom and I realized we had the wrong information for our flight home and with Genny’s help, Tom figured out that we needed to leave for the airport at the same time as everyone else the next morning. Otherwise we would have missed our flight!

At breakfast, Genny asked Derek whether this had been his most exciting trip that he had led and he acknowledged that it probably had been: attacked by a falcon, the narrow escape on 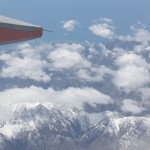 the airplane, and the fire alarm. He may possibly have thought to himself “and all of you Americans”.

At the airport, two couples left on one airline, we were on another and the guides on yet another although heading for different destinations. Our flight to Auckland was delayed an hour. Once aboard the plane we discovered that the girl sitting next to Tom was a hocky player flying north to play a game that weekend. She helped me put my carryon bag in the overhead before Tom got there. She told us that after high school she might like to go to Canada and wanted to study physical therapy. The flight north was quite lovely- we were above solid clouds for quite a while but when flying lower could see islands, bays, a long edge of coast and snowy mountains. We had made reservations for two nights in Auckland to have some free time before flying home.