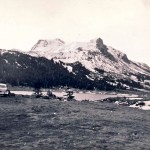 It seems a bit ironic now to realize that my first backpacking trips came about as a result of moving to Berkeley to attend my last two-and-a-half years of college after having grown up in state parks. My brothers sometimes went backpacking with one of the rangers when we lived at Castle Crags but I’d only done day hikes. My two older brothers had told me about the Hiking Club though and I started going to occasional meetings in the Eucalyptus grove on campus where we’d sing folk songs around a big bonfire (for anyone reading this, who is of that era, our song book was “Song Fest”, a paperback with a bright yellow cover). I can still remember one of the songs which ended with “throw a tire on the fire and you’ll expire” as a tire was tossed into the flames, usually toward the end.

The first trip was to Yosemite National Park. I’d not been at school very long as this letter to my parents was dated September 29, 1959. This was my 2nd year at Berkeley. I’d done some car camping with the club but this was my first pack trip. My memory is that everyone else had regular packs with the attached bags to hold stuff. Mine was a simple aluminum frame and I’d piled on my gear, wrapped plastic around it and tied it with string or light rope. But it worked. It had nice padded straps that my mother had covered and embroidered with a 4-leaf clover on one side and a heart on the other.

“Friday night we left Berkeley at about 6:00 p.m., five boys and myself. The other girl who was to be in our car backed out and we took another passenger. It was a very interesting combination of people. The driver and one other fellow were from the International House here on campus—both are from England—one within the last couple of weeks. The older one is a chemistry major and the other one a business major. Then there was a shrimpy, blond, anemic fellow who is supposedly a grad student in engineering. A married man, about 30, was also along. He is some sort of engineer I guess and taught school for a few years also. Then there was a geology major, a senior, very nice fellow.

We stopped a couple of times along the way to have coffee and arrived at Tioga Lake (near Mt. Dana or Dana Peak, whichever it’s called) at around 1:00 a.m. It was quite cold and we were tired so we just threw our sleeping bags on the ground and crawled in. I froze but the stars were pretty (when I stuck my head out long enough to look at them). 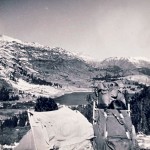 walking along the shore just trying to keep warm. The wind was blowing hard. When the rest of them got up we threw everything in the car and drove back down the road a way to a more sheltered campground (U.S. Forest Service—we were outside the park). After a big meal of orange juice, cocoa, melon, eggs and bacon we drove back to the park entrance where we met the other two cars, which were going on the trip.

The hike started right at the entrance and was only about a mile-and-a-half but steep and there were patches of snow to go through. It was actually hot during the day and I got sunburned. We camped at timberline. Then seven of us walked on up the canyon. Four went around the lake at the foot of Mt. Dana and tried to climb the glacier there. The two Britishers and I went on the opposite side of the lake and were going to climb the ridge. But I had to stop to rest so often that I told them to go ahead so I wouldn’t hold them up and that I would go back. 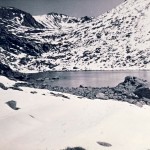 It seemed too early to start back and I was getting cold—wet feet and a rising breeze being the chief contributors. Soo-ooo, I foolishly started up the ridge. It must have been close to 1,000- feet high and composed of loose rock or talus. I final got to the top but by then the wind must have been blowing at least 50-miles per hour. I could hardly stand against it. I’ve never been in such a strong wind before. The top of the ridge was narrow and bare of snow. On my left was the canyon and on the right a snow-covered plateau. I didn’t cross it to see but apparently you can look from the plateau down to Mono Lake and into Nevada. I walked about a mile down the ridge and scrambled down the slope at a safer spot, directly above camp. Never did tell the fellows I had gone up there because it was really stupid. They thought I was down in the canyon and wouldn’t have known where to look for me. It scared me just enough so I’ll not be doing that again!

It was twice as cold that night. And on top of that the anemic fellow had a bad cold which was getting worse. We fed him some soup and an aspirin and he couldn’t keep it down. One of the hikers took him down and drove him into Lee Vining. The hiker walked back in the dark to camp around midnight. The sick one showed up at camp the following afternoon. He was o.k. Well, we had hot soup, hot spaghetti and hot cocoa for dinner that night. We were shaking so hard that it was difficult to hold a cup without spilling. After dinner everyo 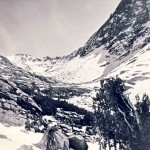 ne accumulated around a couple of huge campfires and we ate coffee cake, which one boy had baked in a reflector oven with heat from the fire. It’s quite difficult freezing on one side and burning on the other—but the warm side sure felt good. I slept a couple hours that night. It was cold the next morning and we had beef stew, orange juice and cocoa for breakfast.

Did nothing but lie around in camp that day. We left the ranger station around 4:00 p.m. and I got back (to my dorm) around midnight. I took my parka (which my mother had made) on this trip and it saved my life in that cold wind.

The geology student is a very experienced hiker and climber and he took off by himself, hunting, and joined us the afternoon of the day we left.

We had a good time comparing English and American schools, food habits and governments with the English students. “

Thanks to my mother for having saved this letter. I had remembered very little about this trip except that it was hot hiking in. And I’m glad I put these photos in my album.