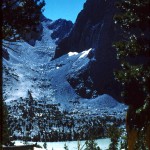 “This weekend was very different. Friday night four of us—Alden (a fellow about 40-45, married, two children was on the Mt. Dana trip in the car I rode in), Larry (a junior, physics major) and Judy (a sophomore) – left around 6:00 o’clock. We drove through Sonora, over Sonora Pass and over to Highway 395, down through Bishop and Owens Valley to Big Pine.

On the way over we ran into thunderstorms and passed one forest fire. We arrived at a camp (USFS) at 4:00 a.m. It was raining so Judy and I slept in the station wagon while Larry and Alden rigged a shelter outside. Got up around 9:00 but I woke up at 7:00. We were camped in some aspens with many other campers, across the road from a creek. Directly across from us wa a sing- “mountaineering service”—which was a camp occupied by a young man and his family. He leads people on climbing trips on his days off—on long holidays. He lives in Oakland.

The east side of the Sierras is really strange. This camp was at 7,800 feet. The surrounding hills were covered with loose boulders, sagebrush, stunted aspen and cactus. The mountains are very steep and jagged. Although the soil is very rocky and dry there are quite a few streams in this particular area.

Saturday was wet and cloudy but we decided to do some walking to limber up. I had no poncho but took my 9 x 12 plastic ground-cloth and wrapped that around me. Needless to say, it wasn’t the best thing in the world. We started climbing up a rocky mountainside—my fellow travelers were all rock climbers. It alternately rained, hailed, blew, and showed brief clear spots. Try climbing a cliff with one hand holding yards of plastic around you, trying to keep a camera dry and seeing where you’re going! We got up by some twisted junipers about 1500 feet above the canyon floor.

The whole canyon below us was filled with fog and it was boiling inn toward us right up and over the edge of the mountain. Pretty soon there was only a big white wall there—then it started hailing. I took off my wool sweater and wrapped it around my middle under the plastic so I’d have something dry to wear later on; stuck my camera inside my shirt; only my green hiking hat on my head. It was warm enough as long as you kept moving but my shoes and jeans were soaked through. Then we ran across a trail and followed it down into a pretty little green valley with a stream and small lake. From there we climbed up again to two other lakes. The trail ended at the last one. There was a teepee-like structure there covered with sod bricks.

That night we went to bed early with big plans about hiking (with packs) into the foot of the Palisades Glacier and the three of them climbing one of the Palisades peaks the next day. This would have meant our leaving Monday around 5 p.m. and driving all night probably getting about two hours sleep the next day. I was the only one that had to be at work that morning. Luckily, for me anyway, Alden felt sick and stayed in camp for a while so plans were changed. Larry and Judy went back on the same route as the day before and climbed a 13,000-foot peak. I walked up to a Seven Lakes Basin—about 5 miles in. Some people who were camped at one of the upper camps gave me a ride up to the end of the road. From there on the day was really funny. At first I was walking behind two women on horses who were quite upset because I was going at the same speed as the horses. Then I walked for a while with four men who were carrying packs. Then I got behind some more people on horses. The women in the group were talking about how they just couldn’t keep going much further—tough life! This side of the Big Pine Creek Basin had many more springs than the south fork so there was plenty of water on the way up. I ate lunch at 5th Lake, then went over to look at 4th Lake, which has, of all things—a resort on the bluff above it. This was the destination of the sturdy horsemen! A small lodge, several cabins, and some tent cabins. There must have been 15 families camped around this small lake.

On the way back I met Alden who was on his way up to the Palisade Glacier with another fellow. Going down everyone on the way up kept asking directions, distances, and to look at the bottoms of my hiking shoes. L.A. is where most of the people seemed to have come from. It was interesting to see all the characters but what a mess of people! As I was starting down the road a USFS patrolman gave me a ride down in his truck—apparently he’s a retired L.A. policeman who liked the area and started taking care of it so they put him on the payroll. I had dinner waiting for the others when they got back.

Yesterday we left around 11 o’clock and came home, stopping briefly at June Lake—a messy resort area around a pretty lake and also stopping to eat lunch at a USFS camp (Levitt Meadows). We got back to Berkeley around 11 o’clock; time enough for me to take a shower and get some sleep. Judy had a recorder and Sunday night she played for a long time after we went to bed. I was sleeping outside that night since the weather was so nice. Heard a coyote bark early in the morning. On the way home we harmonized with the recorder and the harmonica. The hiking club trip cost only abut $7. When we stopped in Tracy for a milkshake we saw the British fellow who had been on the Mt. Dana trip a year ago. Really a coincidence.”

When I was copying this letter I looked up Big Pine because I was curious about the names of the lakes. They really are named 1st Lake, 2nd Lake, etc. and there is a Seven Lakes trail. Most of the lakes were a milky turquoise color from the melting glaciers. We took turns driving back to Berkeley and after we got back I realized my driver’s license had expired a couple of months earlier. Another thing I remember but didn’t mention to my parents was that Alden was really annoyed with me for not being willing to skip going in to work at my part-time clerical job in the engineering office. I remember thinking though that it wasn’t my fault he had altitude sickness and couldn’t climb that one day. No cell phones then to make excuses. I was taking only a couple of classes and was working to pay expenses so I could graduate in January.