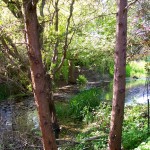 Our backyard isn’t very large but beyond the fence that marks its edge is a space about 4-feet wide, running the length of the property. A dense row of conifers lines the bank that slopes down to a temporary stream.

We have a rather strange land-use situation in this particular part of the subdivision with the neighbors on the far side of the waterway owning part way up the bank on our side, rather than there being a dividing line down the middle. Fortunately the frogs ignore this boundary and everyone on both sides of the gulch can hear them singing every evening.

Usually a pair of mallard ducks nest somewhere along near the water and we see several ducklings growing up before the water evaporates and the stream becomes dry. It’s a very slow moving watercourse with most of the water coming from pipes that drain road gutters, such as from our cul-de-sac, or from roof downspouts. I wouldn’t recommend drinking the water but the frogs seem to be immune to anything in this seasonal stream. I looked on a map and traced the runoff to its end, which is probably a mile away, toward the river. About half a mile downstream, where it runs through a large open field, my grandchildren and I have found rough-skinned newts slowly crawling from one side of a culvert to the other during the spring breeding season.

Residents on the far side have built narrow stairs down to the water and in two places that I can see from our side, built arched bridges, just above the water. The bridges act like dams when the water is high and are sometimes covered. One person has put a small, metal windmill into the pond that has formed below his place. Whoever purchased that house came across last year and cut limbs from the conifers, cleared some blackberries, and now I can see their pond and bridge quite clearly. At this time of year a weeping willow in their yard drapes gracefully over the water and other trees and shrubs are leafing out enough so that the houses are mostly hidden.

I’ve decided to make use of this cleared area as a meditation or bird-watching spot until the water disappears and this morning tested my perch (a board resting on a few concrete blocks) for half an hour, opening our gate and stepping behind the fence. There is something about being perfectly still that seems to let one disappear or at least be inconsequential to passing creatures. The sun was just beginning to fill the area a little before 10:00 a.m. For some time there was nothing but the reflections on the nearly still surface and occasionally a dimpling where a frog, I’m guessing, touched in its meanderings. Then suddenly a pair of Bewick’s wrens, with their arched white eyebrows, perched on the wooden fence to my right. One fed the other something then disappeared into the neighbor’s yard. The other stayed in the conifers, moving about. I think it was probably a courtship feeding rather than a young one being fed since there was no wing fluttering or calling.

Then a song sparrow lit on some dry branches below me. They are dark and hard to see in the shade. Another joined it and they disappeared. Suddenly two birds flew swiftly toward me, right at head level, and went by so close to my face that I could feel the wind from their wings and hear the feathers flutter—an inch away perhaps. I think it was a male song sparrow chasing another out of its territory. A tiny bushtit moved into view, searching through foliage and then disappeared. I suspect there may be a pair nesting either in our conifers or the neighbor’s because one rarely sees just one bushtit! They usually appear in flocks.

When I was about to leave, the male song sparrow lit on an arched dead branch in the loose tangle below me and began to sing. Not a variety of songs but the same pattern over and over. As I was turning away a duck flew upstream. Not a bad session of bird watching but I’m discovering it may be hard to get any long periods of meditation from my perch.