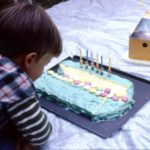 Jeffrey’s 6th birthday party invitations had a skull and crossbones on them inviting five youngsters to a “pirate party”. I made flags out of white cloth with a felt pen drawing of a ship and each child’s name on it with a piece of doweling to hold it. Candies were in paper towel tubes covered with contact paper with a cupcake paper rubber-banded to each end. After candy was eaten these could be used for spyglasses. Also made an eye patch with elastic thread for each. Made a big, black banner with white skull and crossbones, which later hung upstairs at the ranch on one side of the shower framing (which showed like part of a wall). 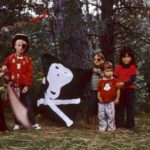 Friday was cloudy off and on and we had a few raindrops but we had the party outside anyway. They had a treasure hunt—divided into two groups and followed written directions. Each received a paperback book. They seemed to have a good time—sailed boats in the bathtub, etc. Inja Halcomb wanted to straighten up Jeffrey’s bedroom and even made his bed, which pleased him immensely. “She did such a good job.” Jeffrey’s cake was shaped like a treasure chest. In addition to Inja there was Anne Marie Meyer, Scott Muir, Josh White, and John Van Duyn. 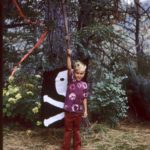 We went out to the ranch late that afternoon. The next morning Jeffrey opened up his family gifts—more Lincoln logs, trucks, a lariat (to go with the two pistols he bought himself with his own money—we didn’t buy toy guns for our children), books, and a Big Jim (similar to a GI Joe that he loves , muscular). Made peach/plum jam that didn’t completely jell but tasted good. Made cupcakes and Rebecca and Jeffrey and I picked a small cardboard carton of pears. Bob left for Weaverville that night so he could go to Bakersfield the next day (Sunday). He wouldn’t be back until Tuesday or Wednesday.

Monday was kind of a lazy day. I held each of the children and looked at a book with them, in sequence, in the morning. They really seemed to need it. After lunch I mixed two batches of cement and did some rock work. Later, although Clarke didn’t have a nap, he fell asleep in the wicker chair while I was reading to the others.

For my own reading I was reading “The Female Eunuch” and “The Best and the Brightest”. Bob called the night before and said he wouldn’t be home until Friday. We talked about maybe not going on a planned backpack trip and about him hiring someone to help him haul riprap for the bridge. Carolyn Crouse called and we talked about nursery school. Picked apples and canned four quarts of applesauce. Got four ears of corn from the garden. Florence said she might be able to take care of the children on the pack trip weekend.

September 2: I next wrote from our backpack trip. We were late getting started Saturday, not getting on the trail until 2 pm. “We started up the N. Fork of Coffee Creek and passed some old cabin sites on the way in. The first was one the USFS had burned down, about 30 feet above the creek with a little spring trickling by. A collapsed cooling house was nearby where the old miner had diverted a larger stream from above through it. 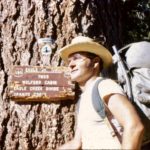 We stopped to look at Hodge’s Cabin. It’s two-story cedar with bark still on—cedar pillars on the front porch, a little barn, outhouse, tiny swimming pool, nearly useless pelton wheel. Mark Groves owns it now. I found a multi-purpose pocketknife buried in the dust there –still have it. 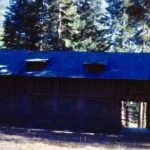 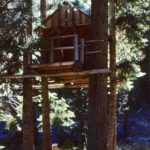 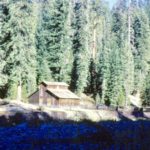 We camped that night along Granite Creek—a little depressing because the flood damage is still so evident—slides, large trees crisscrossing the creek, etc. We didn’t get away from there until after 1:00. Stayed in bed late because it was cold and the sun didn’t hit our campsite until late. We ate lunch around 2:00 along a little stream farther up the trail that runs into Granite Creek. Kinnik-Kinnick killed a baby rabbit further along. We stopped to look at it and then let her finish it off as it was too far gone to save.”

“Stopped at Wolford Cabin, which the USFS uses for snow surveys. The corners of the logs are triangular at the tops. Bob says that’s so water will run off and not accumulate. This part of the trail is part of the Pacific Crest Trail. Jim Fields told us a while back that they’ve had to put little metal emblems along this part of the trail with a “temporary” sign above because people have been taking the good signs that were originally made for the Pacific Crest Trail.” 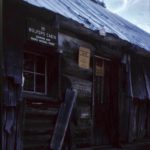 “We ran into a lot of cattle near Wolford Cabin and had to leash the dog. Had a hard time getting around them. Finally they turned off at the Granite Lake Trail. Toward the top of Eagle Creek Pass the country is very similar to that around Mary Blaine Meadows, alpine type with dry meadows and stands of mountain hemlock and white fir. We ate a snack at the divide where trails branch off every which way around 6 pm. 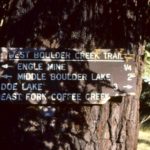 We got to this campsite about 7:30 and cooked, ate and washed dishes in the dark, using flashlights. Hot food tasted SO good. This camp is right near the trail by a little creek. Would like to know how it got its name—Bloody Run. Surrounded by hemlocks and white fir. The stream comes out of the ground about 50 feet above the trail. We’re about 20 feet below the trail. We heard coyotes last night. 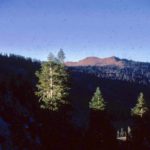 At 7 a.m. the sun is just starting to come up, making Mt. Shasta pink but not yet hitting the mountains near camp. Stellar’s jays began squawking. There are alders along the creek and the water is icy. So far we’ve not seen anyone else on the trail although Bob did see four girls and a big dog when he was scouting out the trail near the Granite Creek and N. Fork trails intersection. 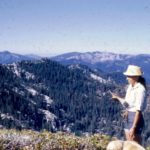 We have to get up and get going so we can get to the road at a reasonable hour. Will have to walk a mile on the road to reach the car.“ 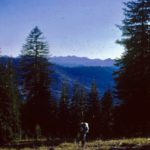 Sept. 7th –back in town and writing in bed before getting the children off to school.“Our day hiking out was probably our best of the trip. We walked about 10 miles, mostly downhill, and Bob and I both had blisters and sore legs –mine are still sore. We ate lunch by a little stream, which ran eventually into the E. Fork. We went through lots of timber—hemlocks first, covered with bright green lichens from winter snow level up. We had climbed steeply after leaving camp, then climbed on without packs to the top of the ridge above Bloody Run. Could look out in a complete circle. Could look back the way we had come the day before out to Mt. Shasta, over to Stoddard Lake, Billy’s Peak, etc. 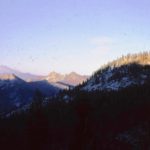 After getting our packs we went on down, went through Doe Flat, passed cattle, then through timber. The last few miles out were very rocky and hot. Even the dog’s feet were obviously painful. The East Fork has lovely falls and pools but all well below the trail. Lots of old mining activity and the remains of a jeep road. Old broken down cabins, an old flume, even a narrow cement wall supported by rocks and dirt fill, which is all that remains of a dam someone attempted.