Bob went to Redding with our VW Beetle and came back with a cream-colored VW bus. It had 54,000 miles on it and was driven by a dry cleaner. It had one back seat and a carpeted floor. We loved it. It took some time to get used to driving but I could see out of it and there was lots of room. 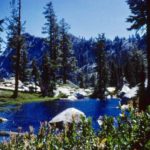 We went out to the ranch that afternoon and I gave the children fried-egg sandwiches for dinner. Bob arrived later. He and Eric Woods had gone across the river and up Big Bar Creek to Ed Hostetter’s place.

Sunday I did four batches of laundry, cleaned the pool (and the bathtub settling tank) and picked blackberries. We had berries with lunch. Sunday night I made four pints of blackberry jam.

The next day I drove into town so Rebecca and Jeffrey could be in on the first day of the next swimming session. Bought groceries and ironed some of Bob’s shirts. We were back at the ranch by 4:00. 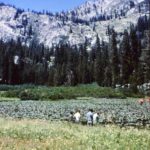 A week later Candy, Jim, Lois and Pete, Bob and I hiked in to Lily Pad Lake for two nights and camped at one of the ponds above it. We left the children with Austins. They were going swimming that day and to a movie that night. On the way in we found lots of wild strawberries which we enjoyed, very sweet, essence of strawberry. We also found some ripe, very large and juicy wild raspberries in one of the meadows. In a heavily shaded forested area we made a rest stop and right in front of Lois was a little brown, furry mouse with big, dark eyes, which it blinked frequently. Finally it broke through its terror and leaped away in short jumps.

Lilypad Lake was small and quite shallow, covered with lilypads, many blooming. “It lies in a big meadow, surrounded by granite bluffs and we ate lunch there. Jim went exploring for places to camp. After lunch I walked around the upper end of the meadow, which was boggy, found a little creek coming off the hill, five-finger ferns. A little further on there was a snowbank among the boulders and right near the edge of the melting snow one pasque flower in bloom. Further around there were large hemlocks running up a draw with a creek trickling down, about the size of Little French Creek at that time of year. I went up to where it looked as if it opened up into a meadow or something but Abner, Pete’s dog, who had gone with me, couldn’t make it so we came back. Abner is a golden retriever but very red and with a massive head. 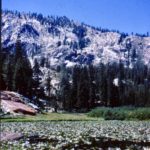 Jim came back and we followed him up a steep trail to a flat where there was another green meadow with a tiny pond, then over the rocks up to the little lake where we camped. It was about 250 feet long and maybe 20 feet wide at the widest. About six feet deep at the deepest, lots of fat polliwogs and hundreds of boat bugs skittering around on the surface.

It was cold and windy the first day. We were hot and sweaty while exercising but froze when not. We hiked up and over to another lake which lies near a pass where another trail comes through. This one was about eight inches deep, mucky and full of polliwogs. On the map all of these lakes/ponds showed as much larger and deeper.

“We had a good dinner that night. I’d brought corn on the cob from Florence’s garden; we had dehydrated chicken a la king, chocolate pudding, dehydrated cherry pie–really more of a pudding,–wine and peach brandy. 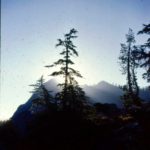 “This morning I got up around 7:00—didn’t sleep much last night, nor did Bob —he just told me his air mattress leaked. I walked over the edge of the granite bluff where I could look down on meadows, one being the one I nearly reached with Abner. There is a big talus slope with a snow patch at the upper end of the larger meadow. The lower meadow has a shallow pond or former pond. There was a doe and fawn in the little meadow. Most of the time they were feeding but once in a while the fawn would bound around. Finally he started running in big circles pausing once in a while as if to say, “Come on Mother, chase me”. At first the doe just took a few steps after him. Then she gave in and they bounded in big circles around the meadow. Sometimes he stopped and maneuvered as if trying to dodge and off they’d go again. Finally they came to a stop in the little pond, touched noses and after a drink wandered off into the trees. The sun was just beginning to touch their meadow.“ 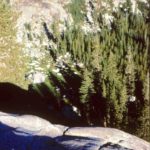 Back at camp everyone else was still in their sleeping bags. 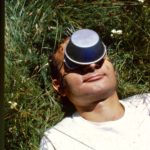 On the way out the next day we parted from Lois and Pete at a fork in the trail and they went to Boulder Lake. Further down the trail where the creek went over some falls we shed our packs and scrambled down for a dip. Bob and I went in the upper fall, which was in the sun but had a tiny pool. Candy and Jim in the lower fall, which was shady but had a big pool-it was ice cold. When we got to the Fields’ we ate dinner and then went into town to pick up the children. 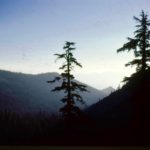