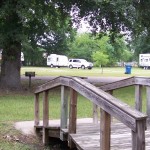 uring our travels through the Southwest last month I’d jot down signs I read along the way, thinking these would somehow jog memories when I read my notes later. Well, sometimes yes, sometimes no.

One thing I noticed were frequent signs saying “Bridge May Ice in Cold Weather.” I guess this might be the equivalent of our “Slippery When Wet or Frosty”.

In some places new overpasses had Native American designs on them, sometimes painted, and occasionally as artwork on the railings. One railing that I remember had cutouts of sandhill cranes.

Speed limits were way over the top—in some cases 80 miles per hour for cars and 70 miles per hour for trucks. In reality though I think there was no enforcement for truck speeds as most seemed to be driving as fast as or faster than the cars. Trucks ruled.We passed many large ranches with huge rolls of hay waiting to be hauled away, and endless fields of corn stretching for miles, perhaps being grown for ethanol.

In the little community of Rice, Texas (named for William Marsh Rice for whom Rice University is also named) we picked up the Casita travel trailer we’d ordered. They are manufactured here but the facility appears so small from the highway that we drove right past before realizing it. They need a larger sign. We received instructions on the ins and outs of the trailer and took a quick tour to see how they are put together. I held my shirt over my face to avoid fumes until someone brought me a mask. Casita trailers are compact and made from two pieces of fiberglass. Their shape is a little like the old airstream trailers. It was interesting to see the process—wiring, plumbing, installation of various parts, carpeting placed on walls, floor and ceiling. (For a fascinating tale William Marsh Rice’s life and the mystery of his death en.wikipedia.org/William_Marsh_Rice)

From there we went back to Corsicana and stayed overnight in a trailer park. Corsicana was named after the Mediterranean island of Corsica, according to Wikipedia. It had begun raining. We are so used to west coast rains, particularly the intense rains of Oregon and Washington, that we found it astonishing to learn that some towns in Texas had no gutters along the side of the streets. One evening, while we were eating dinner in a small restaurant, we could see the water accumulating and flooding one side of the highway. These summer monsoons can result in a lot of water. I read in the Dallas Morning News that a “gauge between Sanger and Valley View recorded 10.78 inches of rain before the rain gauge stopped functioning. Might have topped 12 inches.” Hence the occasional signs warning of flash floods.

Our 17-foot trailer, parked next to a monster trailer in the RV park, looked like an albino puppy lying next to its mother. Casita owners often stay at this park for one night so that if they have a problem with their purchase it’s not that far to go back to the “factory” and get it fixed or be shown how to take care of the difficulty. The cheerful owner of the neighboring trailer invited us in for a highball after dinner. His wife was much quieter and I suspect used to his gregarious nature and frequent unknown guests. He let us know that he was very proud of the state of Texas and its growth. During the conversation he drifted into the realm of politics and mentioned that he wanted things to be the way the used to be. He said he knew that President Obama must be a Muslim because of his last name. I kept my mouth shut but wished later I’d tried to convince him it was Irish—O’Bama. One piece of his advice that we probably should have paid more attention to was his telling us that most RVers stop driving for the day around 4:00 or 4:30 and “have one of these”, holding up his glass.

From Corsicana we drove toward Quitman (“named for John Q. Quitman, a governor of Mississippi and a prominent figure in the Mexican War”-Wikipeda) passing some pecan orchards on the way. Some of the fields we passed were growing not corn but cotton. The little town of Kerens has a cotton harvest festival.

Texas has a Trinity County and a Trinity River as does Northern California but the Trinity River in Texas, at least where we crossed, was muddy and slow with vegetation growing down to the waterline. Quite a contrast to California’s clear waters. The populations of both counties are similar.

As we drove the landscape changed and we were driving through rolling green hills with scatterings of oak and pine trees. In Quitman (known for being the birthplace of actress Sissy Spacek) we stopped at Governor Hogg City Park, a small park that had 10 trailer spaces. I’d called and made reservations that morning and when we got there our space was marked with an orange cone. It was a quiet spot, grassy with lots of space between sites. No showers but clean restrooms.

After dinner we took a walk along the park’s Nature Trail, about a half-mile long. The undergrowth was lush and I had no idea what most of the shrubs and trees were. I discovered on this trip that I feel a bit as if I don’t speak the local language when I can’t identify the birds or the foliage. I did talk to an employee there but he didn’t know anything about it either. He said a few years ago the local cub scouts had identified and labeled everything but vandals destroyed their efforts. Too bad. 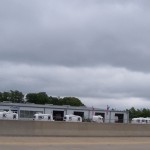 We found a nice place for breakfast in Quitman the next morning – the Country Kitchen. The tables were covered with red and white checked oilcloth. Old tools and other antiques decorated the walls, papered to look as if they were logs. It was owned and run by women and seemed to be a favorite with the local citizenry many of whom greeted each other when they came in. One man, a mechanic, was very helpful, giving us directions to where we were headed to get the trailer tongue extended. 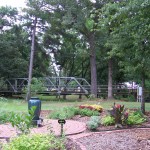