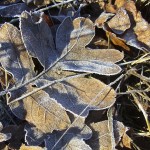 Cold and clear this morning. Very cold! And a slight breeze which made it colder still. But I needed to get out and away from the sound of football games. I’ll watch an occasional game but with all the “Bowls” this year it seems to never end. The sound blurs into wave after wave of crowds and announcers, a bit like having a
blender on most of the day and into the evening. I’d much rather listen to Steller’s Jays.

So I put on my warmest jacket, zipped it up so the collar hit my chin, took my binoculars and little camera and headed the short distance through the subdivision and up to the field. Frost was heavy last night and at around 10 a.m. was just beginning to melt. The unofficial path (many walk their dogs up here) was still firm but I knew coming back I’d need to walk on the grass to keep from collecting mud on my boots. 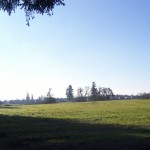 ce was a blanket of comfort with the sound of a train whistle in the distance forming stitches along the edges. I was surprised there was no ice on the sluggish stream that flows at this time of year but with all the rain there must be en 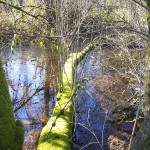 ough current to keep it from freezing. Patches of bare earth were covered with uplifted ice crystals and, in the shade where sunlight had yet to strike this morning, oak leaves wore decorative covers of frost—sugar on cornflakes.

At the top of the 2nd field, just before reaching a filbert orchard, are several large Douglas firs and a smaller oak. A shallow ponded area, dry in the summer, lies along the eastern edge of the orchard and has an a 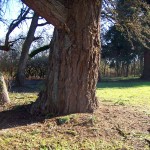 ssortment of ash, oak and fir trees along its banks. Blackberry vines grow in their shade and, sometimes in the spring, I can find trilliums here. On this last day of the year though, I was focusing on frost and frost patterns, not thinking of spring.

Robins were hopping through the leaves under the filberts, occasionally flying up into the branches when I approached. Filbert catkins draped the trees that had more exposure to the sun, pale green waterfalls in the morning light. The ice on this shallow pond had strange geometric shapes on the surface. A second orchard lies just beyond and I skirted around 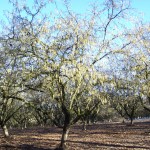 it to try to see whether there were ducks in the next pond, which is there year ‘round. This pond has houses along its far side and I envy the residents their back deck views of the pond and its inhabitants. This morning I was fortunate to get a glimpse of a few Wood Ducks, my favorite. Mallards are common and noisy here but it’s hard to beat seeing the brightly colored male Wood Duck. They are much shyer than the Mallards 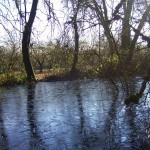 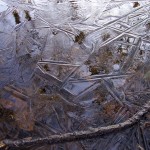 and tend to swim along the edge of the ponds where shrubs bending over the water give more protection.

As the sun began to filter into this area more birds appeared including a pair of Steller’s jays that ignored me rather than scolding as they usually do. Black-cap Chickadees flitted from tree to tree and I saw one Varied Thrush as it silently flew from ground to tree in a more dense patch of vegetation. Juncos seemed as common there as they are at our backyard feeder. Suddenly I realized that something was sniffing at my pant leg—a black lab with tail wagging, which was soon joined by another. I glanced up and saw someon 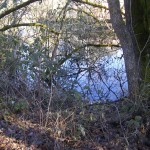 e hiking along, a fellow wearing a hooded jacket and using a walking stick. He waved, calling the dogs, and continued on his way. The only reason I could stand still to look at birds was because of my down jacket, knit hat and long underwear. My hands were freezing but I didn’t want to put gloves on and try to use binoculars or camera. That would have to wait until I headed for home, which I soon did.