This morning I spent a couple of hours volunteering with the McKenzie River Trust on Green Island, over 1,000 acres located at the confluence of the McKenzie and Willamette Rivers. During high water it is an island. During lower water it is accessible by foot or car although only for restoration work or for special occasions such as today’s celebration of 10 years of volunteer efforts in returning the island from farm use to something more similar to its original habitat.

My very first visit was last Thursday when I met a friend there who helped me become acquainted with this special area. Two other volunteers were there for the same reason and they were going to spend some time today telling people about the plants to be found on the island. After the others had left, I took one more walk along a short trail that today had an official sign: Nature Trail Loop. Rather than completing the loop I had turned back to retrace my steps and suddenly became aware of some black and white fur about 15 feet away. Several very small, young, spotted skunks! As I watched they nosed about a bit and then completely disappeared. I walked over to where I’d seen them and discovered a hole in the ground—with a view of the river. The trail had been mown through grass under the shade of maple trees and was lined on both sides with shrubs. I’m sure today’s foot traffic past their den kept them confined to quarters.

My time today was spent assisting with a bird walk by listing the birds that were being identified by two expert birders. Our 8 a.m. walk brought us many sights and sounds of the birds of the area including, among others: osprey over the Willamette river; a red-tailed hawk soaring above the prairie grasses (grasses being planted and encouraged as part of the rehabilitation plan); numerous tree swallows, some nesting in the many bird houses that were built and posted around the fields; two turkey vultures hunched upon a metal power pole structure; kingfishers and wood ducks, as well as a merganser, flying over the river; and brightly colored orioles that captured our attention for some time.

Along with bird identification we also learned that both rivers are constantly changing courses over the years. Where once there had been no river now there are rapids. Where once there had been a rushing river now there is an oxbow, an elongated “C” shape containing placid water where turtles can bask on logs in the sun. In some places dikes that were built by farmers have been removed so that the river can once again flood and replenish some of the land during high water.

After our walk, which lasted almost two hours, we returned to the starting point. I wandered about for a while to see what else the event offered and ended up in a meadow area that had been mowed for the occasion. Around the meadow were various booths belonging to different organizations that are involved in the Green Island project or were sponsors of the celebration. There was even a tree-climbing event with mostly youngsters being hoisted up into a couple of large cedar trees.  Another opportunity was being able to try a little bit of kayaking in a calm stretch of water. At the far end of the field was a small platform for musicians entitled Pedal Power. Two bicycles could be pumped to provide electricity for the instruments although I think, because of the warmth of the day, it was more likely that the power would come from the solar panel the musicians had set up.

I left before noon and was glad I’d thought to put an ice chest and iced tea in my car this morning. Unfortunately the beer truck was just driving in when I was on my way out. 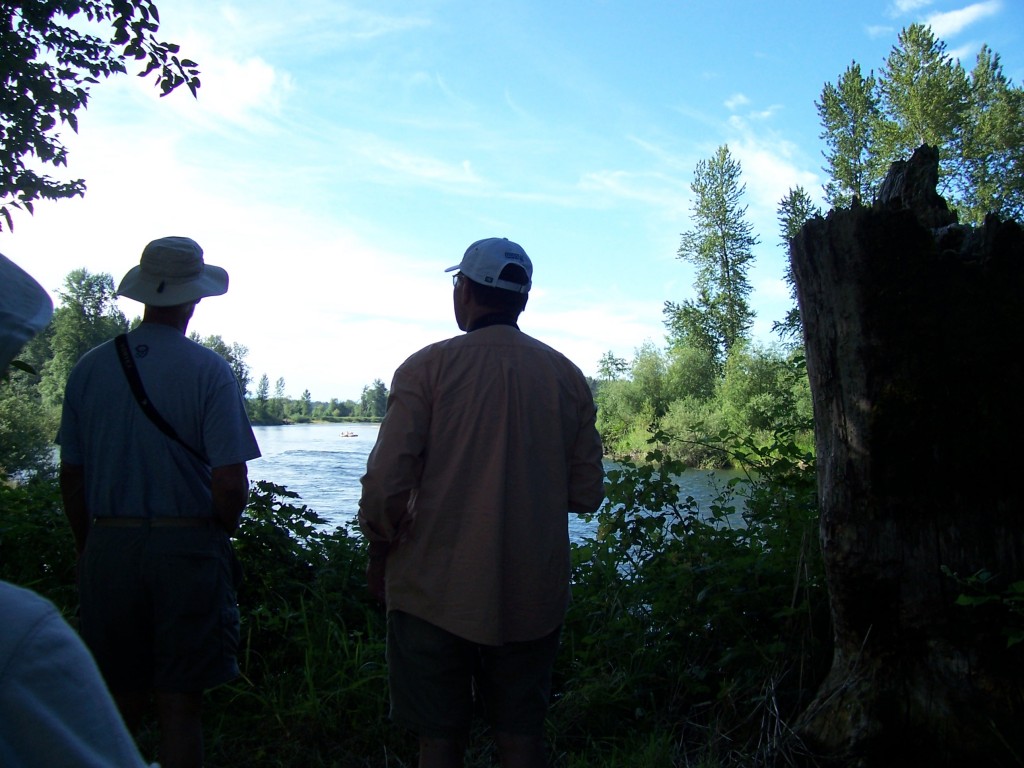