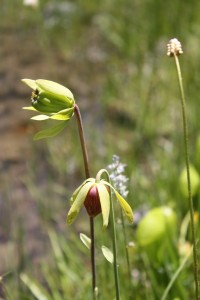 After celebrating the 4th of July in Trinity County style we paused at the top of Scott Mountain, on Hwy 3, on our way home. I wanted to look at the meadow below the U.S. Forest Service campground there. This is considered a primitive campground with no running water but sees quite a bit of use.  A small stream runs through this wet meadow for at least part of the summer. I’d seen azaleas blooming along the winding highway and there were probably some blooming at the lower end of the meadow but I had come to see the pitcher plants.

Pitcher Plants (Darlingtonia californica) grow in several small bogs at Castle Crags State Park, which is where I first got to know them. Some call them cobra plants or cobra lilies because of the hooded shape of their specialized leaves. The flower stands at the end of an erect stalk, separated from the leaves, and could easily be mistaken for some other plant entirely. There are five green sepals and within those five purple petals. After blooming there is a blunt-ended, green seedpod, surrounded by the sepals and petals. To date it is not known how the pitcher plant flowers are pollinated. 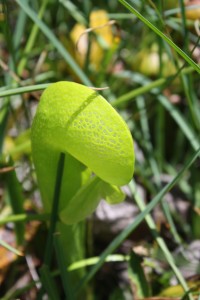 It is those specialized leaves though that make the plant so fascinating. The leaf is tubular, hollow and upright, a bright green with translucent tiny windows, which allow light to penetrate the interior. The top of the leaf is rather bulbous, like a walrus head, complete with green mustache. Insects are attracted to the leaf by a nectar secreted from the “hood”, crawl up inside and drop down into acidic digestive liquid. Microorganisms in the fluid hasten their decomposition and the nutrients are absorbed by the plant. Insects can’t crawl out again because the interior of the leaf is lined with hairs that point downward, preventing upward motion. The moisture inside the leaf comes from pumping action by the roots.

According to Wikipedia, the pitcher plant was discovered in 1841 by Scottish nurseryman and botanist William D. Brackenridge at Mt. Shasta. The plants are found in wet meadows and seeps from the Sierras of California to western Oregon. They are the only species found west of the Rockies. I have always associated pitcher plants with the mountains (Castle Crags and the Trinity Alps, for instance) and was surprised to learn that some grow along the Oregon coast (there is a bog north of Florence, Oregon, along Highway 101). They thrive in serpentine soils, although not exclusively, but do well in heavy metal soils.

David Rains Wallace, in The Klamath Knot, points out that they grow in the red-rock areas of the Trinity Alps whose serpentine soils support manzanita shrubs as well as the Jeffrey pine variation of ponderosa pines. These wet meadows are nitrogen and calcium deficient. The pitcher plants make up for the nitrogen deficiency by using the nutrients from the perished insects. Wallace states “A tiny gnat lays its eggs only in the fluid at the bottom of cobra plants, its larvae feeding on the rotting insects there.” Talk about specialized!

My pleasure comes in having these plants be familiar and, in some ways, relating to a part of my life that has been important to me. Hiking in the mountains. At Castle Crags I remember visiting a small wet meadow area with my mother where we watched a hummingbird climbing into the sky and diving down in a big arc to impress its mate-to-be. The air was warm and soft and fragrant with the smell of azaleas. And pitcher plants grew there. In the Trinity Alps I once camped at the head of a bog area filled with pitcher plants and it was here that I saw a mountain beaver (Aplodontia) carrying grasses and ferns into its den. Good memories.