Sunday, August 18th: Yesterday we left the trailhead with Candie and Jim near Carter’s. This is the first time I’ve been to Carter’s since Bob and I camped at Big Flat on our first anniversary and walked in to Josephine Lake. Apparently he’s trying to sell the place now. Anyway, we left our car in the parking lot, walked back down the road and started up. Carter has done a lot of logging in there, which is really too bad. 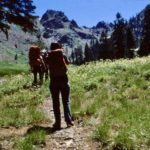 It’s a pretty trail. Switchbacks up through woods, then winds around through small meadows filled with paintbrush, a few tiger lilies, monkshood, and small purple penstemons. We ate lunch along a creek (Kidd Creek) in a meadow. I spotted a small black bear near a lightning burn on the other side. Jim hiked up to a ridge top to see where we were. When we’d entered the meadow I’d seen smoke in the upper end. After we’d eaten lunch a couple came through heading out. We later decided it was their fire, left smoking, and we went up to look. It was still smoldering and they’d left a couple of mashed cans in it. We poured water and stirred. 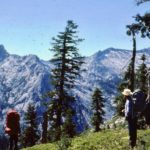 Turned out that we were on the way to Mumbo Lake. Coming up the ridge we crossed a couple of patches of snow. At the top we could see Ward Lake and also talked to a man who was camped there and had come up to take pictures. We circled around above Ward Lake (where I slipped in the loose rock and gouged my hand a bit) and made our way up a series of benches to the ridge above Salmon Lake. Lots of wild mint in bloom along the way and we came across an air mattress torn to bits by bears. Marvelous view from the top–Sawtooth Range and others behind- glacial polished, shining. Down over more piles of rock. Jim spotted a big golden-colored bear down in the canyon below—huge. 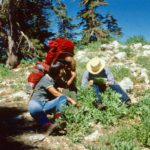 Salmon Lake nests in the rocks along with two small ponds and another below. Heather in bloom, mountain hemlocks, some white pine and fir. Lots of smooth granite rock. Fish jumping all over. We all went swimming—very cold but stimulating. Fixed dinner and ate it up on top of a mound of smooth granite looking out at Caribou Mountains. 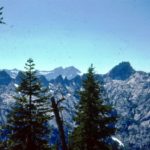 Lots of joking about our reserved tables and the view included in the price. Lasagna, peach brandy and vanilla pudding, preceded by soup. After cleaning up the dishes Candie suggested a bonfire so we had a warm fire to sit around and talk for a while. Finally went to bed and froze most the night. I tried sleeping on an insolate pad—warmer than an air mattress but it sure is hard. 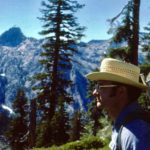 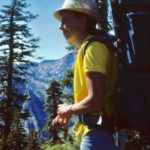 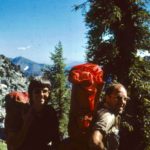 Sunday we fooled around camp for quite a while. Candie fed a chipmunk and a golden-mantled ground squirrel—the ground squirrel coming to about two feet from her. I’d taken my usual early morning tour and discovered one more little pond. Saw the heron again and think it must have a nest in one of the big trees up there. 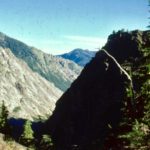 We went up the hill from camp and in practically no time were up on top. Started down the ridge and soon could see not only Deer Creek Meadows but also up into Black Basin (which I think must be a hanging valley). Finally came to a grassy ridge over which the main trail is supposed to go. We didn’t go as far up the ridge as we should have and ended up zigzagging steeply down the right side of the head of the Salmon Creek Canyon instead of taking the trail down to the left. Went through some pretty places though. Lots of Indian Paintbrush, lupine, etc. and in one spot a field of Western Pasque Flowers, though right by a snow bank they were in bud and about two inches high. 75 feet away they were 10 inches high with a big furry seed head. We ate lunch around 2:30 after coming to the trail, right where the water comes across the trail. Could look up and see where the water cascades down from Salmon Lake just before we dropped down to eat lunch by the creek. Missing the trail had meant a lot more work and sore knees but it wasn’t too bad. 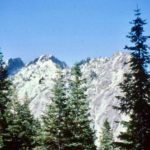 From there on out the trail was easy. Wound through a big meadow and suddenly the trail turned to road. Scot Carter has logged all his land and has roads all over the place. I don’t see how he could do it to such a lovely piece of land. I remember going to a meeting where he spoke about his family’s love for the land, etc. and implied that some people thought the U.S.F.S. should have it, etc. Then he turns around and does this to it. Really bad coming out of the wilderness into that kind of thing.

We got home around 6:30. The breakfast dishes were still to be washed but Linda had started chicken cooking. She helped fix dinner and ate with us.

Monday I took laundry over to Florence and Leonard’s and washed a couple of batches of whites. Was just finishing when Nancy and David and family came in. They’d been staying out Canyon Creek.

Bought gifts for Jeffrey’s birthday that afternoon and made a few calls for nursery school. Eventually left for the ranch after picking up Jessica Twight from the Joneses.
Bob went to Redding and then got out to the ranch around 9:30. We made homemade ice cream and Rebecca and Jessica picked blackberries for it. Had pizza for dinner.

That Sunday evening the two older children were still awake at 9:30. The next day was Jeffrey’s birthday and of course he could hear me rustling wrapping paper. Jeffrey had pulled out a loose tooth and that was under his pillow—too much excitement. Then I heard Bob’s feet thump-thumping down to their end of the room and back and after that things were quiet. I have found only this one bad photo of Jeff, along with Clarke and Scot Muir for Jeff’s birthday. I’m thinking maybe, instead of a regular party, he had Scot come out for overnight at the ranch. 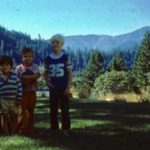 Jessica and Rebecca got along quite well. She was a year older but the entire time was full of talking, giggling and running. The second and third nights she was at the ranch we sent them out to the VW to sleep. The third night Jeffrey was out there also and Clarke until we went to bed when we brought him down to the house. Clarke was really disappointed when he woke up in his own bed instead of in the VW bus. The others knew he was being brought down but I hadn’t told him, assuming they would. I felt really badly about that. We ate lunch down at the creek both days, as Bob was working down there.

“Jessica talked about liking it here and at the Jones’ because it was so old fashioned—we had to hang our clothes out and had no dishwasher! I guess her first two or three years left no lasting impression on her because she hates bugs, spiders, banana slugs, etc.” She lived a very rural life in those first few years. Horace, Nick and Cedric came out for lunch Friday and took Jessica back with them.