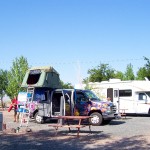 is constant traveling began to get to me every now and then. And I wasn’t even the one doing the driving! We did have a goal in mind though—we were heading for the Grand Canyon, which neither of us had ever seen. We had a couple of deadlines we had to meet that constrained our non-driving time: the first had been the date to pick up the trailer in Texas and the last was the time we’d arranged to see friends and my brother and his wife in Boise. Still, it seemed a bit crazy to me to be by passing interesting places. And if there is a next time we will be going in the spring or fall, not in the middle of hot, humid July.

Near Albuquerque I saw a sign saying “National Museum of Nuclear Science”. All the overpasses here were pink and blue. We passed the road to Petroglyph National Monument but didn’t have time to stop. Near Sky City Casino we stopped for drinks —we were constantly trying to stay hydrated—and met a couple from Phoenix who had a 1994 Casita. They were carrying bikes on theirs. They told us they bought it used and had fixed it up a lot.

Now we saw lava alongside the highway and a sign saying something about an ice cave. There were red cliffs off to our right and colorful terraces. One of the things I hadn’t realized before was how much color there is in the desert where banded rock is in view for miles at a time. We crossed the Continental Divide.

Near Gallup, which a previous sign had said was “Wild and Wooly”, the Running Bear Trading Post was looking for a silversmith. We decided Gallup, which seemed hot and dry and glaring in the afternoon sun, was a good place to get groceries so we wouldn’t be eating out so much. The trailer has a large refrigerator so we could get some perishables. We stopped at a Walmart and were surprised at how expensive the groceries were. It was crowded and noisy and I realized I had finally found a store I disliked more than Costco. Gas prices as we traveled were lower than West Coast, particularly in oil states, but perhaps food is more expensive.

By 5:40 clouds covered the sun. We were driving past Petrified Forest National Park in Arizona and had gained another hour, which meant it was 4:40. These time changes coming west were quite helpful when we were looking for a campsite because it’s harder to find a vacancy the later it gets.

The oil indicator on our car went on just before we entered Holbrook and Tom pulled into a Circle K to get oil. I had seen a KOA listed in Holbrook on a map but didn’t have the number so called the one where we’d stayed in Tumucari a couple of days ago and they gave me the local number. It was 8:30 now and we were more than ready to get off the road. I dialed, told a manager where we were and said we had a Casita trailer. She said, “We’re right across the street and I can see you from the office!”

There weren’t many trees in the KOA and there was a light right by our trailer (sometimes hard to sleep with too much light) but we were off the road. The elevation was 5,000 feet. The managers had been there for a number of years and they ran a little concession stand. So much for fixing dinner in the trailer! But we were tired, it was late, and it was good to talk to other people. We had hamburgers and then a root beer float (floats were only $2 each). The tables outside were covered with red-checked table cloths and were under a tent. This area was shaded by trees and they had a big chunk of petrified log that some youngsters were climbing on. It was said to be over 200 million years old. One person we chatted with at dinner worked with fiber optics for the very large wind turbines we’d been seeing and his wife used to be a chiropractor. Another couple was from the Netherlands and they had their 13-month old baby boy with them. There were strong winds that night, dark clouds and lighting flashes in the distance.

The next morning we bought breakfast here: pancakes, eggs and coffee for $5 each. We talked to a young couple from Michigan who were birders. She identified a white-winged dove and a greater tailed grackle as we sat there. An older couple from Needles, California told us a harrowing tale of having their RV roof peel back in a strong wind on a California freeway. Seeing this occurring, a construction worker got in his truck and roared past them pointing tow 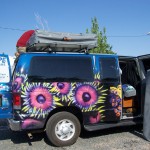 ard the roof. It turned out the roof had been installed with the wrong-sized screws

A brightly colored van with a tent on top attracted our attention. A throwback to the 70s! It was dark blue with large flowers painted on the sides. It turned out to be a rental van and the couple and their young daughter, who were renting it, were from France. They were traveling for three months in the United States. The tent was accessed by a ladder and folded down when they were on the road.

When we left we were driving through more sagebrush-covered flatlands although the road grade climbed gradually. A rest stop along the way offered red rock beauty. We crossed the Little Colorado River, which had a small amount of water in it. All the streambeds in this part of Arizona contained a lot of silt. When we passed the Twin Arrows Casino there was a great view of mountains toward Flagstaff. As we entered Coconino National Forest we were at the 6,000 foot elevation. Looking on the map I could see there are some high peaks in the area—Humphrey’s Peak at 12,633 feet; Kendrick P 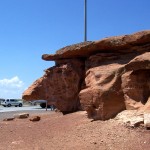 We eventually were in mountains—felt so good! We passed llamas with young ones, green meadows with mountains behind and finally were driving through mountains with aspen, grassy areas and ponderosa pines. There were signs indicating cross-country skiing and a Nordic center and an elevation of 8,046 feet. Then we headed down the other side into sc

rubbier vegetation and signs indicating we were in the Kaibab National Forest, which meant we were getting closer to the Grand Canyon.

“Cattle next 2 miles”, “Elk next 10 miles”. Off in the distance we could see smoke from forest fires at the base of a mountain, probably from the thunderstorms we’d seen from the KOA.