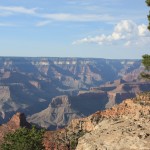 Did you know there is currently a proposal to build a tramway to the bottom of the Canyon, below the east rim, as well as a hotel? In addition more hotels, motels, RV sites, fast food restaurants and other development would take place on the rim above it. http://www.businessinsider.com/grand-canyon-escalade-gondola-2014-8?op=
This seems like sacrilege to me. I will probably never get to the bottom myself but I am excited for those who are able to do so now and in the future. Not every place has to be accessible by everyone.

In spite of seeing numerous photos of the Grand Canyon throughout my life there is no way I could have been prepared for the enveloping immensity of the colors, the time, the history, the depth. I really can’t describe it in a meaningful way. A friend said, “Well you can say it’s a great big hole.” Ummm, yes it certainly is. But I think if you stare at it too long it might swallow you. And you would respond to being swallowed by saying “Thank you”.

We parked out car and trailer in a parking lot above the main street of Grand Canyon Village, which was busy and hot. It was early afternoon. We weren’t sure of the process of getting there but knew we wanted to take a shuttle. After walking a short distance down the main street we stopped where others seemed to waiting, in front of a steakhouse. We had to have Golden Age passes or purchased tickets so we used our passes. It’s a 20-minute ride to the Visitor Center on the Rim. This reminded me of when we went to Yellowstone and wanted to see the geysers. You just have to realize it’s going to be insane with visitors and try to focus on what you came to see.

Once we reached the Visitor Center area, elevation of over 6,000 feet, we caught another bus to Yaki Point overlook and walked down the South Kaibab Trail maybe a quarter of a mile. The name Yaki comes from the Native American tribe of Yaqui Indians. There were a number of people but there were no buildings and traffic was just buses loading and unloading.

Even in that short quarter of a mile I could see how a person could just keep heading down, not wanting to stop. I also thought about what it must be like when mules carrying people come up and you have to share the trail. The trail was wide but the canyon’s depth is overwhelming. We took some photos and chatted with some other visitors. A young couple coming up the trail said they’d made it almost all the way to the bottom but I wondered whether that was really the case unless they’d started at dawn. It’s a long way down and even longer coming back in the heat. In just our short excursion we could feel the temperature getting warmer.There were signs everywhere about carrying water and most people clutched plastic water bottles as they roamed about. Every year someone dies on the trail due to being dehydrated, not realizing how quickly you lose moisture in such heat.

We caught another bus and went to another stop and took more photos. A young woman, who was part of an Asian group, took our pictures for us and also photos of another couple. She seemed quite adept in the way she went about it and I thought perhaps she was a professional photographer. The buses come by frequently, which is a great asset, considering the numbers of people to be transported and many possibly, like us, with very limited time.

We rode back to the Visitor Center and while Tom looked there I went to the bookstore for postcards and a book. We hadn’t brought water (although there was plenty in the trailer) and were very thirsty. I bought a bottle of orange juice for us to share. Our very short visit reminded me of some of the people who came to Crater Lake years ago when I worked there. They would take a look, maybe go to the visitor center, take some pictures and they’d seen Crater Lake. Sigh. But it was better than not going at all and if we ever go back we’ll go in the spring or fall. On the bus returning to Grand Canyon Village we met a couple who told us they had been part of the Rajneesh movement in Oregon a number of years ago. Nice people. The man lowered his voice when he made that confession. http://www.oregonlive.com/rajneesh/index.ssf/2011/04/part_one_it_was_worse_than_we.html
We had seen only a very small portion of the Canyon as well as only a small portion of the development along its South Rim. But I feel fortunate to have even had that glimpse.

When we arrived back at the village we immediately left to continue our journey. We stayed on Highway 64, which goes through the park and along the rim. There were some magnificent v 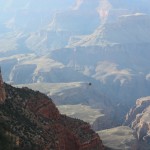 iews there and no crowds. In one spot we were able to see what we were sure were condors flying. In 1982 there were only 22 of these large birds in existence in the United States and the last one seen within 60 miles of the Grand Canyon was in 1924. Thanks to successful breeding in captivity and the release of adult birds about 70 now live in the Grand Canyon. They were released there because it offers ideal habitat for them.

The lighting along Highway 64 was better than it had been earlier because the sun was getting closer to the horizon and there was less glare. In one spot I ducked under some pine branches to get to another viewpoint and discovered elk scat just a few feet from the edge of the canyon. I told Tom later that I could just see an elk coming up to the edge, looking down and saying to itself, “Noooo, I don’t think I want to try that.” Or perhaps, “What a phenomenal view!”