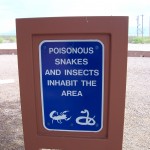 We found in our travels that some Southwest rest stops are much different than ours on the west coast. For instance several had signs warning of possible dangers, particularly for pets or small children. I’m not quite sure how the scorpion got on this sign since it’s an arachnid with eight legs, not an insect with six.

A few days after leaving Missouri we learned that Joplin, Missouri had a tornado the day after we were caught in that windstorm just a short distance away!

We soon crossed into Oklahoma (and I wanted to sing “Oklahoma, where the wind comes sweeping down the plain…”) and observed a highway sign posted a maximum of 75 mph and a minimum of 50 mph. This was the first time I’d seen a minimum posted. In the driving rain we stopped at a tourist information station, used the restrooms, drank some of their free coffee, and learned we were traveling in the same direction as the storm, which now included lightning.

I called a KOA in Choctaw (named for the Choctaw tribe) and got a reservation plus directions. Along here was where we hit our first toll roads. It was $6.50 for our car and trailer. When we turned to find a place to eat lunch in Claremont we had to give the attendant our receipt. She gave us $1 back. We found umbrellas and walked to a Carl’s Junior where we had taco salads and iced tea. Claremont has a street named for Will Rogers and a little statue of him on a horse with the quote “I never met a man I didn’t like.” Will Rogers was born in this area, where his father had a large ranch. Both of his parents were part Cherokee.

We came to another toll station, then turned off onto Hwy 377/99 heading for the KOA and another toll booth. Here we got change back on our receipt–$3.25 out of $6.75 (fee is for the number of axles). We were passing through rolling hills now, lots of green grass and trees with now and then a pond and an occasional egret standing with its feet in the water, plus a scattering of oil or gas wells.

We passed the towns of Prague (established in 1902 and originally settled by Czech immigrants), Shawnee (which is in Pottawatomie County) and Seminole (named after the Seminole Nation) and a very large casino called, appropriately, Grand Casino. By 8 p.m. we were in the KOA.

The man in charge was very proud of his facility and when he guided us to our site on his ORV he explained that a new restroom/shower building had just been completed. He said it was new enough so it should still be clean. And it was. Now and then in these trailer parks people would come by and want to see what our trailer looked like inside and Tom was happy to explain Casita trailers to them. A couple from North Carolina, who were in a 32-foot trailer, came by here. They were thinking of downsizing. Well, one of them was.

The next day we bypassed Oklahoma City, with its skyscraper skyline. I saw a sign saying “Billy Walkabout Memorial Highway”. I was intrigued by his last name so jotted it down. After we returned home I looked him up and learned that Billy Walkabout “is thought to be the most decorated Native American soldier of the Vietnam War. He received the Distinguished Service Cross, Five Silver Stars, 10 Bronze Medals five with Valor device, one Army Commendation Medal and Six Purple Hearts. He served as an Army Ranger in Vietnam, Company F, 58th Infantry, 101st Airborne Division” (all this information is from Wikipedia). He was a Cherokee.

As we continued our journey I saw a number of billboards: Chisholm Trail Crossing, and Cherokee—Live Buffalo, Native American flutes, Homemade pies, Native American beadwork, Cherokeetrade.com. Another sign said Cheyenne & Arapaho College. We stopped in the town of Cherokee to get gas, a subway sandwich and iced tea. Tom had seen several dead armadillos along the road although I didn’t spot any.

By 2 o’clock we were back in Texas. As we drove past sloping land with scattered trees and heavily eroded gullies we came into areas with big circles of corn, watered by wheeled sprinklers. A massive, angular cross near a church must have been close to 200 feet high. We were 40 miles from Amarillo. Long lines of wind turbines, miles and miles of them, were off to ou 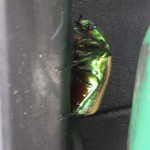 We gained an hour as we crossed the state line into New Mexico. Trees sloped from left to right in the direction the wind usually blows. By 7 o’clock we were in a Motel 6 in the little town of Tucumcari, New Mexico. It wasn’t much more expensive than a KOA and Tom hoped he wouldn’t be kept awake half the night by cicadas. I didn’t hear them if I took my hearing aids out but they were VERY loud and constant. We’d heard them every night that we’d been in our trailer because we slept with windows open to counteract the heat. This must have been a hatching year. The nymphs live underground from 13 to 17 years (although some have yearly patterns) where they drink liquid from tree roots. Little damage is done to the mature trees although young ones may suffer some. The nymphs then emerge from the earth, c 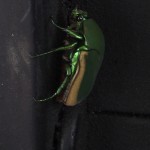 limb up on something, shed their skin and become adults. The males vibrate membranes on their abdomens to make the sound, which I thought sounded like a multitude of Rainbird sprinklers. These photos were taken on the side of a gas pump where we’d stopped to fill up.

We went to a roadhouse just up the street for dinner and beer. Tucumcari was named after nearby Tucumcari Mountain. In 1901, according to Wikipedia, the Chicago, Rock Island and Pacific Railroad built a construction camp near there that was originally called Ragtown. Later it became known as Six Shooter Siding because of all the gunfights. The name was changed to Tucumcari in 1908. This name may have originally come from the Comanche name of “tukamukaru,” which means “to lie in wait for something or someone to approach”.

When we first arrived in Tucumcari we noticed a Hampton Inn, not far from our motel, that had partially burned quite recently and asked about it. The previous week the inn had been struck by lightning! Fortunately all the guests were evacuated before the fire had burned very much. The building wasn’t more than two stories high.

The next morning dawned with strong winds and blowing dust. Blowing dust is a common problem in the southwest and there are frequent signs warning of the possibility of dust storms along the freeways. We drove for an hour or so before stopping for breakfast at a Denny’s in Santa Rosa. As we drove I saw an antelope resting on a small embankment not far from the freeway, the only one either of us saw the entire trip. Many of the overpasses were decorated with Native American designs.

Once again I took note of billboards: Flying C Ranch–Snake Stuff, Souvenirs, Sweet Treats, Serapes, Pottery, T-Shirts, Fireworks, Cool Treats, Guy Stuff. By 11 a.m. we were going through the little village of Moriarty in a big green valley with tall mountains to the northwest. We didn’t know this at the time but Moriarty, population about 2,000, has a Pinto Bean Fiesta in September and prides itself on: “Soaring (gliders), Bogging, Rodeo’n and Motorcycle Racing.”