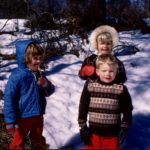 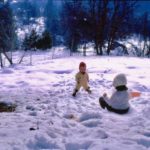 Late 1968 and early 1969 seemed to be all about snow, transportation and young children. We had a lot of snow that winter. And, with young children there are colds and other illnesses. I wrote of being depressed during early January due to being confined to the house with either the children or myself being ill or unable to get out because of snow, or both. That eased as the snow melted but just when the driveway cleared it would snow again. Finally, in early February, we were able to get both vehicles in and out of the driveway, which gave me more flexibility.

Occasionally Mary Ann Fields and I would get together to talk, mostly about teaching our eldest children to read, and Rebecca and Scotty seemed to play well together. Our younger children were too young for interacting much.

When the weather wasn’t bad I tried to make use of going to buy groceries by walking downtown, carrying Jeff in the pack. We’d try to ride back home with Bob when he came home for lunch. This trip would include a stop to look at the ducks at Bob and Alan Young’s place and usually time for a snack at Varney’s and/or a trip to the library. I was taking care of Kathleen Morris from 2-5 every day after school. She and Rebecca usually got along fairly well. I tried to have some kind of craft project they could work on or cookies to decorate—something to keep both of them busy. When the weather got better we’d often go to the park.

Sometimes Bob had to go to the top of one mountain or another to work on phone company equipment. Going up Long’s Peak (out near the lake) included riding a skidoo to get there. He was still interested in the school board and attending their meetings. Now and then he had to go to Garberville for a couple of days. And once he had to go to Victorville for most of a week. Rebecca was enchanted by his packing process and “helped” him put things in the suitcase. Later she took a cardboard box and carefully folded up doll clothes to pack in it. She said she was going to New York.

Dave Ohde was showing a movie to interested people called “The Medium is the Message” based on Marshall McCluhan’s book. It implied that the way we send and receive information is more important than the information itself. Actually, when the book came out, there was a typo so it read “The Medium is the Massage”. McCluhan liked that and kept it. I think Dave also showed it to some of his high school classes.

My nephew, Nick Twight, had heart surgery and Alice and Horace Jones took care of his brother and sister for two weeks so the parents could be with him. Alice asked whether I could help out for two days so I took them one day each week of the two weeks they were in Weaverville. I made cookie dough the night before so cookies could be cut out and decorated. The first day, everyone made valentines in the morning. In the afternoon they rolled out the dough, cut and decorated. “I’m too hovery–would have been better if I’d gone out of the room and stayed out. But they couldn’t get their cookies from the table to the cookie sheet by themselves; Jeffrey was screaming in his bed; crumbs were all over the floor; I got crabby. Then they all went outside and played for awhile. When they came in they had hot chocolate and cookies. Alice and Horace came for them at 4:30. The two children were quite a pair—bright, quick, aggressive. Jessica loves dressing up. Cedric put together a puzzle 3 or 4 times as quickly as I could have. I’m really tired.” Alice said Nick was doing better than expected and would be able to go home sooner. The second day that I had the Twight children we went to Varney’s and the library. Afterwards we went home and I cut out crowns for them to decorate and wear. Hotdogs for lunch. The two boys took naps, the two girls talked. After naps I put up card tables and blankets for a house.

I was involved with trying to get information out about the damage that would be caused by the proposed Dos Rios Dam and wrote several articles for the Trinity Journal. The first one was on anadromous fish. I did some research and also consulted with John T. from the California Fish & Game so I could be sure my information was correct. This came out in two separate issues of the Journal. I began working on a second article in mid-February—this one on deer migration. Researched deer browse, talked on the phone to Burt K., Marvin H., and Gene G. about deer browse. Took the kids with me over to the U.S.F.S. to get a paper on deer browse.

In mid-February Bob hooked the washbasin, shower and laundry tray to one line, running plastic pipe out across the garden. That left only the sink and toilet going into the septic tank. He had to leave the sink on because the only vent went up from the sink line. Then he put lime where the leech line leaked. He also said there was a lot of water just standing under the house–drainage from the rain and snow running off the bank behind the house. That was going to require a ditch across the yard with a drain. I was up about five times that night with coughing children.

February 23rd—Bob went downriver and walked to the ranch from above Walden’s. There were lots of slides and the creek had washed around one end of the bridge. Up at the house, the generator wouldn’t start nor would the tractor. The roadwork needed will cost four or five- hundred dollars. “He is very discouraged. I am too because I feel more than ever that I should try to get work next year.” We have so many areas where we need to spend money—“I hate to see Bob get too involved in lots of back-breaking type physical work when he can do so much more with his hands and mind.” A few days later Bob decided he could do the roadwork with the tractor but would take most of the summer. I made some phone calls to ask about teaching jobs for fall. There were some for upper grades at Big Bar and Lewiston but I wasn’t qualified for that. At the same time, I really wanted to have a third child.

Feb. 26th – Bob and I stayed up until nearly midnight working on a letter to Reagan. He wrote and I typed. (I’m assuming this was about Dos Rios dam.) 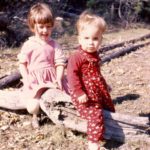 I’d almost forgotten about Mounty Mt. Lion. Some controversy arose locally about the whether mountain lions should be eliminated or not and I decided to leap into the fray by anonymously becoming Mounty Mt. Lion. Various letters to the editor were exchanged. My most articulate responder was a mouse. That was fun!

At a Historical Society meeting we went to (Dr. Amesbury spoke on Ishi), my entry and another from a lawyer who lived in San Francisco, tied for the title of the newsletter—Trinity Trails.
“Cat got into the meatloaf while I was gone.”

As the weather improved the children played outside more. Jeff would go to the door every chance he had and squeal to be let outside. I worked on cleaning up some branches from a tree Bob had cut down, raking pine needles and cones and hauling them in the wheelbarrow down to the road where they could be more easily loaded into the truck. Bob finished putting the wiring in the addition. One day the children and I rode out to Riordan’s so Florence could take some pictures of the lake with snow around it. Jeff wouldn’t go near Thelma or her mother but went right to Clint.
Bob had gone to Garberville for a few days. I put in some insulation in the addition.

The U.S. Forest Service told us they wanted to make a jeep road on our side of Little French Creek to do some surveying for a road in Big French Creek. They planned ro log up around the Upper Ranch within the next few years and wanted to haul the logs out Big French Creek. “I don’t mind the logging as much as I do the access created for people to come in around us.” Bob hoped he might be able to get them to do some roadwork in the process.

One day, while we were eating lunch in the car on the way to the ranch, Rebecca looked up at the sky and said, “The clouds have big blue blankets.” Jeff was learning to say a few words—Daddy (Adee) and Bye-Bye. He loved to be read to and if Bob came in late, close to bedtime, he’d grab a book and take it to his father.

One evening, after Bob got off work, we rushed out to the ranch. We could drive all the way to the house by then. Scoot Miller’s cat was parked out there. The children ran around the house looking at their possessions—In two minutes Rebecca bounced her ball, pedaled her trike and swung on the swing. “It was so nice to be at the ranch again. Many deer in the meadow, Eagle Rock covered with snow, grass growing green, trees budding.” We ate dinner at Big Bar. 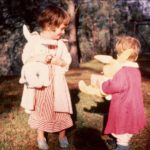 Easter Sunday I hurried outside, after having the sunlight wake me up, and hid eggs. Put slippers on the children and went outside with them to enjoy the hunt in the wet grass. Bob stayed in bed to sleep. Rebecca’s stuffed animal was a little donkey while Jeff’s was a rabbit. A little later we all went over to Florence and Leonard’s for another egg hunt with cousins. In the afternoon we worked on the addition.

I covered a packing box with contact paper to make a small closet for Rebecca.

Ironing was often mentioned in my journal—it seemed ongoing and constant along with doing laundry. So glad it is a rare occurrence now!

Bob didn’t get elected to the school board. He was disappointed and I was for him but “in many ways it’s a relief. He is involved in many things already and is so conscientious he’d probably work his head off.. Today he got some of the results by districts, which was heartening. He came in 3rd in Weaverville, 1st in Big Bar. “ 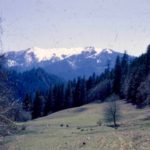 In mid-April we drove out to the ranch. Redbud and dogwood were just starting to bloom. The peach and pear trees were blooming. Two apple trees had fat flower buds. At Prairie Creek the gooseberry bushes had small berries but at the ranch they were still in flower. Bob walked up the hill with Jeff in the pack to the boundary but Rebecca and I turned back and spent some time watching ants carrying tiny bits of dirt from their hole, putting it down, and going back for more. A week later when we were out there all the apple trees were in bloom. And on that weekend Bob worked on the tractor and generator getting them both in working order. He gave Rebecca a ride on the tractor from the orchard to the barn.

One evening we let Rebecca stay up to watch Cinderella on TV (black and white). “She loved it. When the fairy godmother appeared she asked (hopefully and wistfully and I thought it was so sweet) “Mommy, do I have a fairy godmother?”