Interesting wetland wander this morning thanks to Willamette Resources & Educational Network (WREN). I haven’t been on one of these monthly excursions in a long time. About 15 of us met at East Kirk Pond, near Fern Ridge Reservoir. Our guides were Wes Messenger, Willamette Valley Project botanist and Aaron Conich, Wildlife Technician with the Army Corps of Engineers. 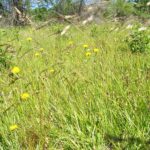 Wes gave a background of the the geology of the area from ice age to the present and explained how vernal pools are perched on material washed down from the Montana floods as well as ash from Mt. Mazama (think Crater Lake). He told us about native Americans burning periodically to keep plants like ash trees from encroaching on the prairies so that plants they used, such as camas, could continue to thrive and he identified some of the plants growing nearby. 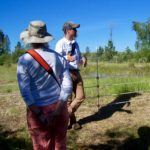 Aaron’s explanation of the life of Western Pond Turtles was what I found of greatest interest. These turtles nest on land along the upland prairies as well as spending time in the water. They have a lot of competition from an invasive species, the Slider Turtle, that also nests in these places. Sliders can lay eggs several times a year while the Pond Turtle usually nests just once a year. And the Sliders lay more eggs each time. Predators of both include raccoons, foxes, coyotes, and skunks. We viewed one tiny pond in a nesting area that was surrounded by an electric fence to help discourage predators. He showed us the remains of one Slider nest that included some bits of egg shell, spongy and more like snake and lizard eggs. Pond turtle eggs are bit more like chicken eggs in texture but both turtles’ eggs are quite small. 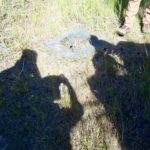 We were very lucky that Aaron had found an active nest just a couple of days ago. It now has a wire enclosure over it that has holes big enough for a tiny turtle to escape if it wanted to. A stainless-steel tag is numbered and attached. The enclosure is firmly attached to the ground. I asked about the hardness of the earth and he said that the female gorges on water and then urinates on the ground to soften it so that she can dig with her strong feet. She digs a tiny hole, about the diameter of a 50-cent piece and lays about four eggs, stacked. She then scoops up some of the wet earth and makes a rounded plug to plug up the hole. The evidence of there being a nest is the plug plus what little grass that is there being matted down in the shape of the bottom of her shell. The babies don’t hatch until next spring! I was surprised at that. Then they make their way to the water. A very fine-mesh screen covers the top of the cage to keep raccoons from putting their agile paws down to pull the plug. When Aaron finds a nest he pulls the plug, checks the eggs–without removing them–to see which kind of turtle is the parent–and then replaces the plug with one moistened by water from one of the ponds. 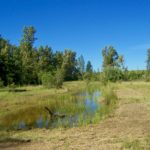 As with some other kinds of turtles, the temperature of the ground at a certain time during the incubation period determines the sex of the turtle. A cooler temperature yields males and a warmer one females. Because they are stacked, the top layer may be slightly warmer or cooler than the bottom layer. Ongoing studies are being done throughout the Willamette Valley and citizens can contribute to the information by signing up with INaturalist and reporting sightings.