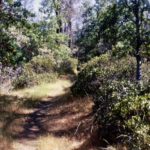 I returned from a Community Concert Board meeting in Redding that had been at the Neville’s. It was 11 pm when I was writing and I’d just made sure the children were tucked in, as it was cold that night. Patty had been their sitter. Bob had gone to San Francisco that afternoon. He had called and left his number for me with Patty. This was on a Tuesday.

Saturday we had gone out to the ranch. Bob and Clarke had gone in the big truck while Rebecca, Jeffrey and I, plus the dog, had gone out in the VW bus. Before we left we’d stopped to see the Woods for a few minutes. Eric, Marilee and little Sam were there too. Once at the ranch I fixed dinner. We didn’t turn on the refrigerator. It was a beautiful, warm weekend. We got there before Bob and Clarke did and when we got to Prairie Creek Road, Chuck Johnson was there, fixing the phone line. Someone had cut it the night before. Since the gate hadn’t been tampered with I went on in but was a little nervous.

Sunday Bob got up at 6:00 and went down to the creek to work. He dug by the boulder on the east side, making the area ready to build forms for the abutment. We went down around 8:30 and went on to Big Bar to buy a chunk of ice and a sack of ice cubes. Came back and planted the garden. Bob said that the water ouzel parents were feeding one young one in the nest but another further up the creek.

After lunch I mowed the lawn, then joined the children in running through the sprinkler. Around 3:00 Eric and Marilee Woods arrived for a short visit but they had left Sam home with Helen and Herb, much to Jeffrey’s disappointment. He’d gotten quite attached to him the day before when we’d visited.

Monday was a holiday in place of the traditional Memorial Day. I got up at 6:00 and walked down to the creek. I had a feeling the water ouzel nest was empty. Took off my shoes and waded over to put my hand in and felt its softness, no birds. I found one young one near the old bridge site and one up further, just below the logjam but didn’t find the third one. When an adult gave a warning cry the first young one stopped dipping up and down. It looked just like the rocks. Then, after a minute, it started bobbing again–slowly, but getting faster. It fluttered from one rock to another, acting as if it were tempted to go into the water, pecking at the rock for food.

I went home and fixed breakfast for everyone, washed the dishes and went for a walk with the children, up into the meadow, through the woods, down the old road, coming out where the jeep trail takes off. Back at the house I mowed the orchard, which took a couple of hours. The grass was deep in some places. Fixed a lunch and took it down to the creek where we ate and the children played for a while. Bob built a gently sloping path down by the bank, which was a help. Clarke was delighted because he not only found a “baby” banana slug but also two larger ones that started chomping on his leftover peanut butter sandwich.

That Tuesday was the last day of nursery school, except for the picnic. Becky Kaneen brought two snakes in terrariums, a coral king snake (she called it a mountain king snake) and a gopher snake. She stayed for quite a while and the children really enjoyed holding them and talking to her. Paul Clowdus even kissed the coral king.

Jeffrey brought Alex Belden home with him. Rebecca left her music books at school so I hauled her and all the boys over there and then up to music lessons. Came home and Bob had me do quite a bit of the job of changing the fan belt on the VW bus. Then I went back to get Rebecca. Jane Belden came for Alex around 4:00. 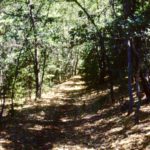 On Thursday we had the nursery school picnic at the Douglas City Campground. We had 26 children there and about 15 adults. The night before I stayed up until 1 a.m. working on certificates for the kids and finished them that morning. The parents gave me a $10 gift certificate to Greenwoods, which I was delighted to have.

Clarke got sick again that evening. Bob came home for dinner and then worked on some bridge stuff before driving out to the ranch to stay overnight and come back in the morning.

I wrote, “I hate projects—everything and everyone is placed beneath the importance of whatever the project is.” But I had married into a family that had a lot of projects going on. I must admit I became more competent and independent as a result of these projects.

Jeffrey’s class took a field trip to Redding to visit a new supermarket.

May 31st I wrote that I had been up and down a lot the night before because of Clarke’s illness. But I managed to get a short nap. When I was writing it was 11 pm and Bob still wasn’t back from the ranch.

“Really feeling fond of the children tonight. I wish I could make them realize how much I love them. Seems as if I spend so much of my time being witchy.”

“Rebecca wept at part of “The Yearling” tonight. I don’t know what I’ll do when we get to the end—I’m not sure I’ll be able to finish because I get so emotionally involved myself. The thing that really got to me tonight was that I felt a part of me in her—we were there together going through that only I wasn’t weeping as my adult self—but I know I won’t be able to keep from it later.”

Florence took Clarke for a couple of hours that day so I could haul kids to the newspaper office. Marcia Crouse helped me. Clarke took a long nap that afternoon and when awake kept telling me about every half hour, “I like you Mommy”. Dr. Breeden made an appointment for him to have an upper GI in Redding the next week. (Dr. Stanford, pediatrician, said he couldn’t find anything wrong.) 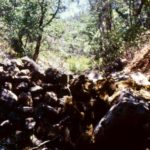 This was a little dam in Garden Gulch, left over from mining days.

The first week in June Eric Ohde helped Bob all day Saturday. On Sunday David Winegardner went out with Eric. Right after lunch, just after we’d eaten, I looked up and saw Eric holding his hand up like a torch, blood running down his fingers. I thought, “My God he’s cut his finger off” and went running up. He’d mashed his finger in the gears of the cement mixer, cutting through the nail about three ways. (I can’t imagine how painful that must have been.) I loaded up the kids and took him to Big Bar Ranger Station where one of the men wrapped gauze lightly around it. Drove in to the emergency room at the hospital in Weaverville. Doris and Dave came in and Dr. Nielson patched him up–no broken bones. Then I took the children up to Ohde’s. Linda took care of them while Doris and I drove back out to the ranch. She brought their car and David Winegardner back. 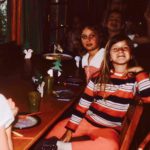 Somewhere during all these chaotic days Rebecca had her 9th birthday party. I’d gotten her a Japanese made canvas suitcase, a wastebasket for her room, a pair of pants,etc. She had a squirrel cake. 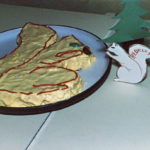 And on another day I left Clarke with Linda Lindsey while Rebecca was visiting Ann Marie and Jeffrey was visiting Josh up on Timber Ridge and took a hike up Garden Gulch. I knew it would be several weeks before I would have a chance to be by myself as we were soon going to go to Nehalem, Oregon to visit my parents.

I hiked up Garden Gulch to what earlier that spring had been a rushing, mossy rocked creek. It was dried up except for a few tiny pools here and there, packed with water striders. I found an old jar right at the beginning of the creek. Where I finally turned around I found an old gold pan, which had once hung by a square nail. I took both home with me. Found a place that would be nice to revisit the next spring, a lovely piney flat with a little green meadow. I also found a rattlesnake on a dry hillside. It didn’t rattle or even move until I stomped my feet a lot.

Clarke went to Stephanie’s (Crouse?) birthday party. He was really excited about it. Usually it was his siblings who went to parties.