Dinner on Gilda and Sandy Sander’s houseboat at the lake with Bob’s boss, Don Lance, the Sanders, Bob Van Duyn and Elwin Bagley, Roy Blair and Jim Barrett. Most of the men spent the evening talking business but Jim Bob Van Duyn, Gilda and I each took a turn at water skiing. 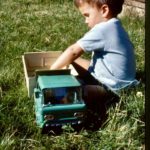 A few days later we took Rebecca’s friend Nancy with us out to the ranch. About half an hour after I went to bed Nancy woke up and the rest of the night was difficult because she was afraid of the dark. It was very dark out there once the generator got turned off. No night lights, no street lights, just very dark. Not good if you were a nightlight child. Left a flashlight on but its batteries ran down. Finally put her in bed with me. The next day we took Nancy home, then went to Candy and Jim Fields’ house to visit. Ate lunch there and the children all played in the creek.

After dinner that night Rebecca, Jeff and Bob went to Hooper’s to get the ducks; two week old Muskovies. Out at the ranch that weekend I dug a little pond for them under the apple trees. We kept them in the cat cage at night. I started a fence but needed more wire.

Bob had someone come out with Ken Arbo’s backhoe –he dug one culvert, then got stuck up near the bathtub settling-tank. Ken Arbo came out Monday night to get his backhoe but also dug the needed culvert with ease.

Jeff went to Merry Phillips birthday party. While he attended the party Rebecca, Clarke and I went to Varney’s for lunch. It was very crowded and we sat with Ola Peterson, which was a treat. The next day I had to take Clarke to get a DPT shot because Tigger had scratched a fraction of an inch from his eye the day before.

Then we headed for Big Bar and got caught in a tremendous thunderstorm. A cloudburst from about Helena on. Jeffrey and Clarke slept through it until we got to the house but Rebecca awoke at our road so was in on the strikes hitting all around us. We saw a couple of good ones in the Prairie Creek drainage near the switchback. I was a little nervous about getting out to unlock the gate. Of course I got soaked hauling groceries and children from the car to the house when we got home. It was very exciting though with huge raindrops and hail pounding down. “Finally it cleared off leaving the air damp and clear, steam rising from everywhere. We’ll have to watch for smokes for the next week or so.” 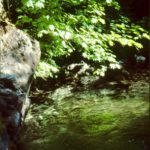 Bob had to go to Mt. Meadow Ranch. “They now have a phone from the Siskiyou side but want to have a mobile phone provided for backup. They had a mobile phone for a couple of years but this year one didn’t work and Bob doesn’t think it will now. He said it never should have since it has to go over Thompson Peak.”

I got a long letter from Mary Jo Omstead about Rebecca’s year of kindergarten. Some of which I agree with and some I don’t. She’s so concerned about her social shyness and I figure she’ll eventually work it out and am not too worried. Bob and I had problems what way too and we’ve survived. She used to get stomachaches as a tiny baby when I took her around a lot of people so I think she’s doing pretty well. I never had friends visit my home as she does or played with other girls at all except at school. We lived away from town and also our parents seldom approved of the other kids. Actually I didn’t have any real girlfriends till college. Those I got along with in high school, except for one or two, were just acquaintances. We had little in common. Rebecca is getting more experiences in dealing with people at an earlier age, which I think will save her a lot of agony later. She has learned to enjoy her own company, which I think is important and few learn to do this. “

Herb Upham came out to help Bob work on culverts. I went into Big Bar with the children to get some extra food. Bob seemed to enjoy working with Herb. We were paying him $3 an hour.

Bob decided to not do the septic tank or generator shed that summer. He didn’t have the time or the money.

In early August my mother had a stroke (at age 62) and my notes are filled with communications with my brothers and my dad. I was upset and wishing there was something I could do to help, kind of hard with small children. My oldest brother was living in Seattle (as was my younger brother) and the closest to Nehalem, Oregon. He was also preparing to go back east for a job interview. He was always pretty good about helping out when help was needed though. Our parents retired a long way from all of us because they didn’t want to be a burden. After numerous phone calls, arguments with doctors, etc. and a phone call to a family friend who was a doctor in the Bay Area they had her flown to Seattle. The ambulance plane landed on the dirt runway at Nehalem to pick her up. In Seattle her broken hip was fixed and rehab begun. My father began to spend time staying at my eldest brother’s house and then time in Nehalem to finish up some work he had started on the outside of the house that had to be completed.

That day I wrote “So far today I’ve swept the upstairs, scrubbed out the shower and washed the outside and inside of the two upstairs windows. Did two batches of laundry and took the children down to Little French Creek for an hour. We ate lunch there and they played in the creek. I spent most of my time fishing little rocks out of Clarke’s mouth and giving him big ones to chew on. Very nice down there—cold water, enough shade, water striders, frogs, minnows. Clarke took two steps yesterday. “ 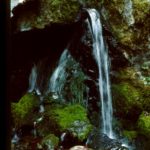 There were no more entries until August 29th. Once again I was trying to catch up on the missed days. One important item was that Clarke hadhad his first birthday. He started walking on the 25th, going a few steps and then falling over but was really anxious to go—and so proud of himself. He was also starting to climb everything he could and was quite strong.

We and John and Mary Ann Field were looking into sending children to an alternative school that would be located at Val Harger’s ranch. It was currently being used as a summer ranch for children. An agreement was signed to use it for the first year for free and we incorporated as Warm Mountain School. Mike Looney and Janet Brown would be the teachers and it would start out at two mornings a week. The school would be in the bunkhouse, which needed to be winterized.

Filsen Glanz, a friend of Bob’s, and his wife Kate and their 3-year old son came to stay one night, camping on the lawn at the ranch. He was teaching in New Hampshire.

Rebecca passed into Advanced Beginners on swimming lessons with her 2-days a week lessons. She made a lot of progress over the summer and the little pool at the ranch helped a lot. 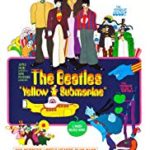 In the middle of August we drove to Berkeley, taking Jeff and Rebecca but leaving Clarke in Linda Lindsey’s care, to attend Marily Grey and Eric Wood’s wedding. The reception was held in Tilden Park in a eucalyptus grove. The musicians came to the grove too, which was a nice touch. There was an oboe, a flute and a cello. After the reception we went on the merry-go-round, a large, old fashioned one with music provided from a roll, like a player piano—pipes and drums were activated on the back of a panel. (I hadn’t been on one since I was living at Castle Crags and we went on one at a carnival in Dunsmuir). Then we rode on a little tram in another area of the park. The children loved it. Jeffrey felt very big handing the attendant his ticket.

The Saturday before the wedding we stopped at the Ski Hut and bought a backpack for me. That night we took the children to see The Yellow Submarine, which they enjoyed at one level and we at another. Sunday we visited the Hall of Science—the children kept busy for about 1 ½ hours with all the gadgets. We then went to take one more ride on the merry-go-round (it ended up being four more). After lunch we headed for home.

By the end of August I’d canned 16 quarts of applesauce and picked a lot of blackberries, many near Price Creek and some from the bushes across from the house. I made two pies and over three quarts of jam. Our peach tree was loaded and I picked as many as I could because school was starting soon and we had to move back into town. I spent a lot of time sawing or gathering wood for the kitchen stove during the summer and had taken over completely on the lawn mowing.