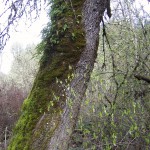 hat overcast, after all our days of rain. Since Monday was a holiday I was sure there would be many people and many cars. My guess is that every-other-person also had a dog. So I sat on a bench for a while, wearing my volunteer’s cap and vest, answered a few questions, said good morning, walked around. The fee at this parking lot is $4 and can be paid for at the yellow box with a credit card or cash. Yesterday it wasn’t accepting cash and I had one complaint about that. No one in the office because it was a holiday. Some were creative—one woman said that someone with a credit card paid for hers and she gave him the cash. People of all ages were out to enjoy the day, from toddlers to seniors. I keep my cell phone turned on in case of emergencies (not known for having it on otherwise). And I always take my binoculars and small camera. 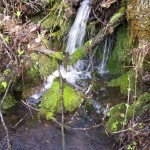 After an hour I drove to the north parking lot. Much quieter there—only eight to ten cars. This lot was very muddy, full of potholes filled with water. I ate half an apple and then walked around—up the road past a yellow gate, then back to the parking area and up the path to the kiosk. Using a plastic sack I picked up some socks lying in the mud, an old cd, and an empty cigarette package to take back to the garbage can at the office. Some come  here to spin out the dirt (deep mud right now) part of the parking lot and it was a mess. I’ve never seen them in action but another park watcher did last year and reported the license number. Often people park here to take a trail down to the river to fish or,  in the  summer, do some wading.

This second hour completed, I started back to the main parking lot, but stopped next to a car that was nose first into the ditch. As I turned on my blinkers and looked for the driver, another car pulled up alongside and the driver put his window down. We chatted about

what to do—with no one on duty that day—he knew a park person he could call at home; I’d try to contact the Arboretum supervisor. A woman suddenly appeared between our two cars and said it was her car, she’d called AAA, and help was on the way. She’d been trying to turn around on the muddy area and had gone over the edge with one tire. 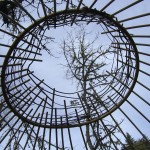 Back at the main lot I put vest and clipboard back in the lock box, traded my official cap for one of mown, put on my boots and went for a short hike in the arboretum. The trail skirts the edge of the river and the air was filled with the sweet scent of Indian plum (oso berry). The white bloss 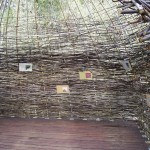 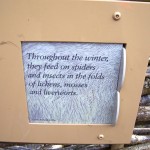 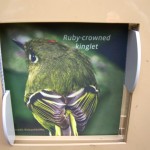 from the tips of slender branches of this early flowerer. I took the Garden Trail that winds past small ponds surrounded by spirea, creek dogwood, alder and ash. A new blind structure has recently been completed on a side trail and the viewing platform is cover 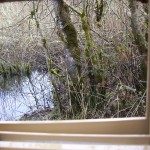 ed with willow weaving. Along the walls are small box structures with sliding doors. On the front is a description. Slide one door and get the photo of the bird or amphibian that goes with it. Slide another door and look through to the pond and shrubs. A tunnel of bent willow branches extends from the blind about 15 feet up the trail as an entry.

Returning to the main trail I crossed the bridge over the pond (too early in the year for western pond turtles) and then hiked up the hill for about another half mile going from mixed forest to an open meadow and oak area. I stopped to sit a few minutes on a favorite bench—a favo 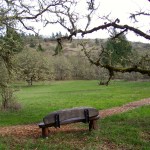 rite because of the quote on its memorial plaque as well as its pleasant view. The woman to whom the bench is dedicated died at age 54. The quote chosen for her is one of Mary Oliver’s: “Pay Attention. Be Astonished.”