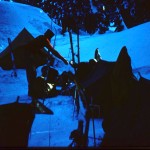 Time for breakfast and it’s 10 degrees.

In 1959 I went on my first snow-camping trip with the UC Berkeley Hiking Club. We were on skis, carrying backpacks and camped in the snow, definitely a first for me. We were in the Desolation Valley area near Lake Tahoe. So cold! Five girls slept in one tent and I was on one of the outside edges wearing all my clothes plus jacket and still froze, even though in a good down sleeping bag. I think I got too warm and then, wedged against the outside of the tent melted the snow. We were told to chant “snow-camping is fun” during the trip and it was but it wasn’t. I remember drinking hot chocolate that was mostly chocolate and just a little water on purpose 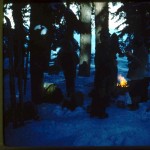 , just for the energy. We had to chop a hole through the ice covering the lake to get water. I had no business skiing with a backpack because I wasn’t very adept at skiing. When I’d slide into a gulch head first and stop abruptly, my pack would clout me in the back of my head. But it was a good adventure. 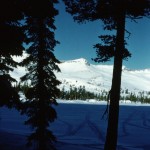 January 30, 1961: In 1960 I was living in an apartment on Shattuck Ave with my sister-in-law while my brother was in the army in Germany. I had pretty much finished school and was sending out job applications. I sent one last letter from Berkeley to my parents about a hiking club trip.

“I got in tonight at about 4:30 after five days of ski touring. (this time I was on snowshoes) We left around 6:00 o’clock on Thursday morning, got up to Clair Tappan around 10:00 I think) and started for Peter Grubb Hut through a rather wet snowstorm. This was really a luxurious snow camping trip. We carried only our sleeping bags and food since all utensils are already there.

The hut has one main room with two big tables, a wood stove, sink (with no running water), and cupboards; a warming and emergency room with access to the outside and the main room, which has a wood stove and benches in it, with a toboggan in the rafters; and above the main room there is a loft with –get this—springs and pads for beds! It is a typical rock-walled, steep-roofed hut. Water can be provided for the sink by carrying it (or snow) up into the loft and filling a tank. There is even a chemical toilet adjacent to the hut. Most of our time in the hut was spent in the warming room since it is easy to keep warm and we hung all of our wet things in there. One of the fellows likes to cook, and for large groups, so he did nearly all of the cooking. We had apple pie, puddings, pancakes, stew, soup, cocoa, etc.

Friday we walked over to Paradise Valley, seven or eight miles round trip. It was sunny at first but later clouded up—walking kept us warm though. All of the trees were covered with snow, which made for good picture taking possibilities.

Saturday we climbed up Castle Peak—up near the top we had to take off our snowshoes and skis and walk because there was so little snow due to the wind and because it was very slippery. At the summit there is a little box with tablet for signing. From there you can see over i 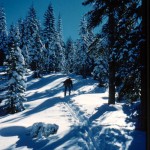 nto the Truckee Valley on one side and Tahoe Lake on the other. Very jagged peaks all around and a steep cornice immediately below. Coming down off of there those of us who had snowshoes just sort of ran in slow motion when we reached soft snow. Later that afternoon I took a walk down the hill from the hut-just wandered around looking at things and taking pictures. There are lodgepole pines, white pine and red fir around there. One large red fir had bright green moss along the trunk and big patches of white snow clustered on the needles. That evening the moon was out only briefly and then was hidden by clouds. Some of us went out and walked around the meadow for an hour.

Sunday it was snowing but even so six of us ventured out and walked some distance to Sand Ridge and Sand Ridge Lake. The snow was dry and powdery and the wind blowing quite strongly on the ridge tops. All of the trees had icicles on the tips of the branches. There is a cornice at the top of Sand Ridge and the wind was blowing snow off of it in swirls. We finally got back to the hut to find cheese toastwiches waiting for us.

One of the most fascinating things about this trip was the people on it. I rode up in a V.W. with Phil Pennington, the same fellow I went up with last year. Also in this car were a girl majoring in anthropology and a fellow who is in engineering. In the other car there were two girls-one a senior in sociology, the other a sophomore in psychology and three fellows-Bill Gardiner (the forester I have gone ice skating with—he followed me on this trip but I spent the entire time ignoring him; hiking club is strictly non-couples as far as I’m concerned); a graduate student in philosophy and a senior in law school.

The evenings were delightful. The warming room was lit by a Coleman lantern and we sat on the split log benches along the side of the room or on small barrels next to the stove. Parkas, gloves, hats and socks hung from nails on the beams of the ceiling, each one casting a shadow. We discussed politics, philosophy, psychology, sang folk songs, played word games and read poetry aloud. It was a very compatible and interesting group. One of the boys, using an axe, made some chessmen Sunday afternoon and they marked out a chess board on the bottom of a wooden box. He made the white chessmen out of plain wood and the black ones out of bark. Two of the fellows sat next to the stove with the Coleman lantern above them and a candle next to the board (box) which they had on the chopping block between them. Both of their faces are quite angular and the combination of the clothes hanging from the ceiling each etched by its own shadow, the crude chessmen in the light of the candle, and the snow coming down outside made the whole thing seem like a painting.

It was sort of an expensive trip when everything is added together but well worth it.

I got a C in Statistics so I guess that I’m all through now—must be a mistake somewhere but who’s going to argue? Not me, I or anyhow, whichever way it’s supposed to be. “