We went down to the creek for an hour around three. Took crackers, lemonade and a can of beer. We saw a little fish (minnow) and fed it some cracker crumbs. It seemed quite tame. Back at the house I made bows for the children, at their request, out of cut alder branches. They used fat, plastic bolts about three inches long for arrows.

The pool was covered with the bodies of delicate 4-winged insects that morning. Took me about 20 minutes to get them all out. “Not as many big scenes with the children today.”

The next day we went into town. Took Rebecca to swimming lessons. Jeffrey and Clarke sat drinking 7-Up (a treat since we hardly ever allowed sodas) while I talked to Esther Little and her son Michael. Got Jeffrey’s hair cut. I took Rebecca to piano lessons and got Karen Austin to watch the boys while I ran errands. After I picked her up we went to the library and the grocery store but before I got her I spent half an hour browsing in Greenwood’s. Bought three paperbacks-one on medical aid whie backpacking, one called “My Side of the Mountain”, which I read to Rebecca and Jeffrey (a New York boy runs away from home and lives inside a tree in the Catskill Mountains), and one called “What Do You Say After You Say Hello”, by Eric Berne.

After we took Karen home we went up to the Woods and swam for about 1 ½ hours. It was very cooling and relaxing and I enjoyed talking to them. She gave us each a cold peach from the refrigerator—“marvelous”. Then back to the house to pack up for going to the ranch. Bob drove up while we were there and he brought Clarke out and some groceries. Saturday Bob took all three children with him to Big Bar to get gas. It took longer than normal because the River Store was out of gas and they had to go to Big Flat.

“Sunday morning I got up at 5:30, fixed a thermos of coffee, took an apple and drove over past the gate to prune along the road. Took a coffee break after about 1½ hours. It was pretty and peaceful—I love to watch the sun come up—the change of shadows and colors as it slips down the hills. Very quiet—no birds, which seemed strange. Just mosquitos. When the sun touched my area, however, there was an increase of activity—mostly Steller’s jays. I think I heard a pileated woodpecker but couldn’t see it. I got back to the house shortly after nine. Bob, Clarke and Jeffrey had eaten and the dishes were done. Rebecca was still in bed reading. Got quite a bit done on the road but have about an equal distance to go.

“We had the washing machine in the basement—an open area under the porch that we were making walls of rock around. And I could iron down there if need be.

Saturday August 4th: When we were getting ready to leave the ranch to go into town for overnight on Thursday the dog took off after a deer. “Together they were leaping through the dry grass, Kinnik-Kinnick’s golden hair making her a thing of beauty, yet frightening as she pursued the deer.” She didn’t come back for 20 minutes. I was really angry with her. When she did come back her mouth was foaming—she is so strong. I beat on her with a rolled-up newspaper and hoped she hadn’t caught it.

Clarke’s birthday was coming soon and when I was pushing the grocery cart at the store he told everyone he saw, ”I’m having a birthday!” That night Bob got home late for dinner and then we drove over to the airport to watch him leave for Bakersfield. Two other people were going who were dropped off at Manteca. After the children were in bed that night I made a cake and frosted it the next morning before taking Rebecca to swimming lessons. 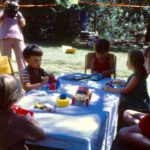 Picked up Carin Emily Fields from Lois’ where Candy was having her hair cut. Cheryl brought Michael and Linda brought Scott. Florence came and stayed the whole time, which was a help. The children seemed to have a good time and spent most of it eating—hotdogs and buns, carrot sticks, chilled grapes, lemonade, ice cream and cake. Candy came up around one and I took everyone else home about two. Clarke had wanted to leave with Florence when she left earlier so I took him over to her house, where he took his nap. I left Jeffrey and Rebecca at the library while I went over to the nursery school to get an address. Took all three of them up to the Woods to swim for a little while. Rebecca beat me in a race from one end of the pool to the other with the crawl. “She’s really doing very well.” About the time we were going to leave Bob arrived and swam for 20 minutes. 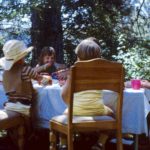 We did family birthday gifts for Clarke and had the other half of the birthday cake, celebrating his birthday a little early. The rest of us will be gone on his actual birthday and he’ll be with Florence and Leonard because we’re going on a backpack trip, too far for him to go with us.

This first real backpack trip was difficult and seemed to take forever going in. Once we arrived things were great. We hiked in to the Stoddard Lake area but took the long way around (I think we didn’t know about the shorter way) and the only way we made it was to separate the two children, Rebecca with Bob and Jeffrey with me. It took us six hours to get to McDonald Lake where we stayed the first night. Then, the next day, we took them cross-country for about half a mile up a steep hill and arrived at a lovely small lake. It was a much better spot for the children with room to roam and shallows to play in. There were little green meadows and dense thickets of hemlocks for “tree houses” and they had a great time exploring. The dog had a good time too but we kept her leashed most of the time. Rebecca’s pack had weighed about 12 pounds and Jeffrey’s 5-8. Mine was 35-40 and Bob’s 50.

White pine and mountain hemlock were the predominant trees. Groundcover was mostly pinemat manzanita, some Douglas spiraea, heather and some type of ceanothus.

“Last evening I walked up the bench behind camp—very steep in spots. Large outcroppings of glacial polished rock. Took a picture of Bob sitting on a rock playing his harmonica at sunset and found a glacial polished outcropping to sit on and yodel. The view was outstanding–lights and shadows forming deep contrasts except toward the sun where everything was hazy. Saw a doe way up at the top of the bench-probably the mother of the fawn Candy saw the last time we were up. “ 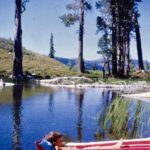 “Rebecca had a very restless night-about the time I’d be drifting off to sleep she’d cry out. Between that, not much air in my air mattress and worrying about both children rolling into the lake, I didn’t get much sleep. Woke up at 6 and really wanted to go back to sleep but also wanted a walk to myself and some early morning pictures. Got up and hiked up the ridge to look over into the Coffee Creek drainage. Took several pictures one with Mt. Shasta pink with alpine glow and the sky pink where the sun was coming up. Left my light meter on a rock and had to go back for it later in the morning. Saw a little wren, which spent its time skittering along through the pinemat manzanita singing all the time, a delicate lilting little song in contrast to the rasping sounds it made when it would emerge on a rock with tail jerking.“

We had a nice flat rock as a kitchen area—table, stove perch, dish-washing. After breakfast Bob was reading “Pairing”, at my request, lying on his sleeping bag. Jeffrey played about with a cup at the lake’s edges. Rebecca lay on her sleeping bag reading “The Secret Garden”. 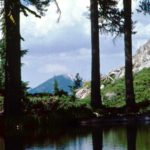 That evening we moved the camp into some hemlocks in the meadows as there were threatening rain clouds. We all slept late the next morning. After breakfast of scrambled eggs, hash browns and orange juice and coffee we swam a little and then hiked up to the top of the bench past where I had gone the other night. Lots of heather, some penstemons in bloom and wild onions. We picked some of the onions and put them on our peanut butter sandwiches at lunchtime. There were huge boulders up there with small caves beneath them which the children enjoyed and they wrote on slate pieces. We could see all three lakes from up there.

After lunch and swimming some more Bob made boats for the children out of bark, sticks and plastic sack sails. The wind would blow them around.

Later we lay in our makeshift tent with a few raindrops spattering down and the children got really silly. Jeffrey was feeling pleased with himself because he’d written a letter to Florence about the trip and I’d said I was proud of him, something which isn’t said often enough I guess. That night we roasted marshmallows over the primus stove.

After breakfast and packing up the next day it took us about an hour to work our way down to, and around. Stoddard Lake. We ate lunch at the same little meadow with the ice cold spring where we’d eaten on the way in, only this time there were 5-6 cows in the field across from it.