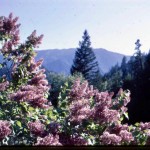 By Mother’s Day the phone wire on the Prairie Creek side was strung as far as the main line and we had 900 feet of culvert delivered. Progress! But even before any larger projects there were always maintenance things to be done. We drove out to the creek again but had to cut a fir out of the way that had been leaning across the road, supported by other trees, since the last snow.

Herb Lane cut down a big snag in the creek and Bob was going to use it for abutments for the temporary log bridge. The lilacs and redbud were about past, and there were still a few apple blossoms. The iris were in bud and grosbeaks seemed to be everywhere. Just a couple of tiny patches of snow lingered on the mountain. The meadow was green with a white sprinkling of popcorn flowers. Woodpeckers had been pounding holes thorough the south end of the upstairs. We drove back to town, changed, and went to Junction City grange hall with Florence and Leonard for a Mother’s Day dinner, seeing many people we knew: the Snyders, the Bordens, the Rablins, and Coburns among others. I met Ola Peterson, who wrote a column for the Trinity Journal, for the first time.

The baby was due the 8th and I’d made arrangements to get all the report cards done a week ahead of time, which was when I was going to stop teaching. Gay Coburn, who was a board member and a teacher, was going to take over for the last week of school.

George Costa started on the new route for the road and roughed it out from the creek up to where it forked. He and Bob and another person finished the bridge on the 30th and Bob was able to drive the jeep back to town after all those months of it being up at the ranch. One evening we drove up the Glennison Gap road so Bob could look at some culverts and turnouts. Very pretty up there with much dogwood, and all still in full bloom. Bob cut two sprays for me, which I put in a vase on the dining table. Then we visited with the Varneys for a while. Fred was going to help load culvert into the store truck the next day.

My brother Peter and his wife arrived in Weaverville. He was going to be working for the U.S. Forest Service at Whalen Station that summer. June 5th he went with Bob and George to the ranch. They moved culvert and George buried it. They got home around 7:00 p.m. coated with dried clay. Bob was pleased because they couldn’t have gotten this much done without Peter’s help. Pete seemed to have enjoyed himself and later commented on Bob’s stamina and muscles.

Our daughter was born a few days later. “Such a tiny bit of humanity!” It seems so strange now but at that time the father could stay in the room up until moments before birth and then had to leave, not being able to see the baby emerge. He was allowed in immediately after that when the umbilical cord was still attached. Seems unfair but that’s how it was. My mother and father came to help for a few days, sleeping on cots in the little apartment. That Saturday Bob hauled the last of the culverts and said there was a rockslide on the other side of the bridge. He went out the next day with Jay Pruett and his backhoe and they put in more culverts. The slide was in a place where George undercut too far and about 400 feet of bank had begun to move.

We watched the 4th of July parade from in front of Morris Hardware—propped the baby up in a chair in the window where we could see her. Bob put up a “not for sale” sign. Some small boys began a heated discussion of whether or not she was real, one insisting that real babies weren’t that small and didn’t breathe that fast—that she was probably a robot.

July 5th the three of us went out to the ranch. We took the jeep and had Rebecca’s car bed in the front seat. Bob worked on the shower (upstairs now), finishing the drain and starting the water pipes. I cleaned out the two food shelves, which had been ravaged by mice. Also found a dead mouse upstairs in the tissue box. Mice were a constant issue any time we were absent for a while.

There is a huge crack in the bank above the new road, just beyond the rock bluff. This will undoubtedly come down this winter—really a mess. The rest of the road is in good shape with a beautiful grade. 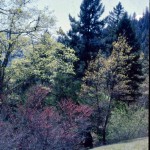 We moved out of the apartment and to the ranch on the 25th and Florence and Leonard came out that afternoon. Florence brought dinner, which was a big morale boost. We were discovering that moving with a baby was a bit more complicated than with just the two of us.