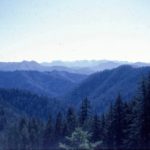 Wednesday—continued—We left camp at 9:00 and rode to Marysville, which was established in 1885 and abandoned, I think, in 1913. There was a Marysville Hotel run by people whose daughter, Mary, is buried there. Nothing there now but myrtle (a groundcover with shiny green leaves and purple flowers) growing among the brush, and old logs and rocks, which were part of the foundation as well as old cans, pieces of iron stove, and bits of pottery. Florence found an old broken red, poker chip and we found an iron lampshade (small, which I brought along). We also found an old piece of rocking chair and the head of a bed.

Then we rode on to White Rock, which was fair-sized compared to Marysville I guess. Here were a number of cabin sites, caved-in cellars, etc. Many old rusted cans and lots of broken bottles. People had done lots of building there. There was even an oven door with a porcelain handle.

We then rode to the Boomer Mine but were unable to see the boomer because of the huge slide in Slide Creek, which has grown to eliminate the trail. Tremendously deep gulch there in the narrow canyon, several hundred feet deep. This was mined by the people who lived at New River City (Old Denny), which we next visited.

At New River City we drank water from a mossy spring—nearly muddied by Sport (Vernon’s dog), who loves water. Then we wandered around. One old cabin remains, another has recently burned. One cellar was carefully rocked in with layers of rocks, those in the corners overlapping smoothly with the walls. I found a tiny bottle with a broken top in the brush. 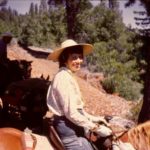 We went back to Mary Blaine, then up a steep climb all past the Cinnabar Mine, which we’d passed on the way down only on the opposite side. There was an old retort (like a big concrete stove), old cabin and a little shack with chairs in it, and two wheelbarrows. We ate lunch about 1:30 at Mary Blaine, put the packs on, and left at 3:00. We rode right across the top of that big slide that goes up above the Boomer Mine on a narrow little trail. When we came to Election Camp we found a note from Alice and Horace, which they’d left there Sunday when they hiked through. (My notes don’t say where they’d hiked from).

After a big Indian massacre at Lake City in 1864, all the people of the New River area had moved over into Siskiyou County. They didn’t want to lose their vote so they came to this camp to vote—about 300 miners.

We got off the trail a little but soon were going right again. We rode and rode –rocks, brush, timber—and a beautiful view always of Pony Mountain, Cabin Peak, Wedding Cake, and Thompson Peak. The others saw a bear once (I might have been behind on my fat horse!). We finally arrived at a cut over area about 6:30—clear cut and a mess. A wide road led through it. We entered through a hillside meadow full of cattle and they followed us for some distance, calves getting separated from mothers. One calf still had its umbilical cord. Reunions were loud and prolonged.

We found a place to camp off the road a way on the trail to Grizzly. When the horses were turned loose Target headed for the top of the hill and had to be chased. Camp was made in the dark and dinner, drinks and dishes done in the dark also. Two boys came hiking down from Grizzly on their way out. We covered about 17 miles. This may have been the camp where I remember having my highball and sprawling on my sleeping bag to be awakened by Bob telling me I needed to help fix dinner. What a day! I wouldn’t have believed a person could get so tired and sore by riding a horse or see so much beautiful country.

Thursday– We broke camp slowly this morning because our stove was so small and it took a long time to cook hotcakes. We went through one downhill stretch, which was kind of tough because of Topsy’s sway—made me seasick. But our trip kept giving us beautiful views of the Thompson Peak country. We ate lunch at a camp on Grizzly Creek about a mile above the Molieter Mine junction. Lots of large firs, ponderosa (Jeffrey?) pines today and some large incense cedar. The ground cover is thimbleberries and twin berries with the latter having bright orange color.

Just after we started up the hill this morning Florence’s cinch slipped on Milkshake (sometimes people traded off on horses) and the saddle slid way back. It was on steep switchbacks and she really had to work to keep the horse still and get the saddle fixed. We arrived at Grizzly Meadow about 3:30. Tall, jagged cliffs with remains of glaciers up at the top, a thin waterfall dropping down from Grizzly Lake in front of the further cliffs. Bob and I will go there tomorrow. Our camp is at the lower end of the meadow right beside the creek. There is another camp in the trees at the other end, toward the cliffs. 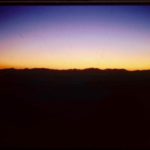 The dogs have such sore feet they can hardly walk. There’s a Douglas squirrel scurrying around just above our sleeping bags.