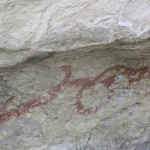 Twice this year I’ve been able to see petroglyphs, actually see them, rather than viewing pictures. I am awed to see the results of the creative urge, the artistic impulse, in such early inhabitants of our planet. Twenty-five million years ago this area, in the Waitaki Valley, was covered by ocean. As a result, limestone is prevalent and there are also many fossils. We stopped for a short time to look at Takiroa Rock Art as we were traveling down the east side of the South Island near Duntroon, after leaving Twizel. 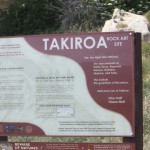 Here the Maori drew on limestone, and under limestone overhangs, using “fat, charcoal and natural red ochre”. Some of these have worn away naturally and some have been vandalized. Heavy wire fencing blocks the visitor from actually touching them but we were close enough to take a few pictures. We visited a little fossil shop there and chatted with the owner who acted as if he’d have liked us to stay longer. He knew a lot about fossils. Some of my information came fr 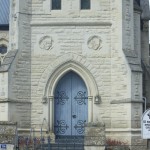 om a brochure that he gave us including the fact that Aslam’s Camp from “The Lion, the Witch and the Wardrobe” was filmed here.

The town of Duntroon was established around 1869 and named after Robert Duntroon who came from Scotland to New Zealand in 1860. In Duntroon, the van stopped so those who wanted to could take pictures of the limestone St. Martins church. We drove right past the Flying Pig Café in this little town. On another stretch of road, Taryn pulled over, hopped out and picked some passion fruit, saving most of it to ripen and be eaten at a later time.

We made several more stops—one at a fish hatchery, and one at a place with big round boulders 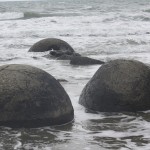 on the Koekohe Beach. We ate lunch on this rainy day in a small restaurant above the ocean at Koekohe Beach before going down some metal stairs to the beach and taking pictures. I think our guide felt it a bit of a waste of time and it did seem a bit silly to get excited about large round rocks. It made one wonder whether they were fake or something. But I’ve found that they are possibly four to six-million years old. Apparently there are other beaches with these oddities. They are actually made of mud, fine silt and clay and cemented by calcite. I do like the Moari view of it though. Their legend says “the boulders are the remains of eel baskets, calabashes and kumara washed ashore from the wreck of a large sailing vessel.” Strong winds and more rain brought us back up the stairs to the van. A very brief additional stop gave us views of more fur seals and nesting red-billed gulls.

That night we were at the Portobello Motel on the Otago Peninsula near Duneden. We had another wo 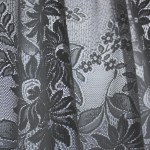 nderful room in this motel of cottages. From our bed we could see out sliding glass doors and across the balcony, past some trees and a few buildings, to the ocean! It was basically a well-furnished studio apartment with cute little bedside lamps that turned on and off just by touching the rounded glass shades. 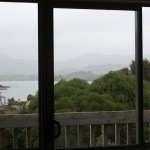 ng our luggage into our rooms we drove along a road, that skirted a small pond where spoonbills were feeding, and climbed up onto a high bluff above the ocean where we could see R 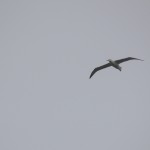 oyal Albatross gliding with the rising air currents. The wind at the top was very strong and the birds easily lifted over our heads. Aim the camera, pan it over your head, click. 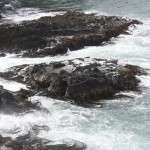 we were at dinner, the motel staff brought our continental breakfast for the next day so we could eat in our room in the morning. We ate dinner just across the street from the end of the motel’s narrow driveway at a pub/diner that made good use of natural wood walls, ceiling beams and bar. The heat from a gas fireplace was welcome as we warmed up after our albatross encounter on that wind-blown cliff.