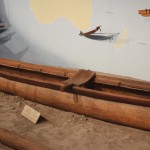 Raining. We went to a museum in Dunedin and spent the morning there. It was very interesting but of course I could have used more time. I bought two little bird models for the youngest grandchildren for their birthdays. They would pack flat so shouldn’t break—until they are put together! There were all kinds of exhibits on several floors including Polynesian and Moari cultures, nature, etc. I took a few pictures trying to not use flash since the museum forbids that. One problem I had, and others said they did as well, was that some of the exhibits were hard to see because it was so dimly lit. Still it was the kind of place one would want to go back to several times. There was so much to absorb. 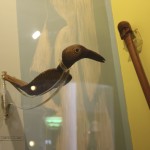 o meet for lunch but otherwise we were free to roam wherever we wanted throughout the museum. One area had many of the birds we’d been seeing and it was helpful for me to see them up close. We ate lunch there, sitting at tables in the large entry room, which also contained a gift shop, food court and good coffee.

When we left the museum we went to a grocery store to get snacks for later since we wouldn’t be eating dinner until 8 o’clock. The pub was staying open that late just for us. We had a couple of hours of downtime in our rooms and then at four o’clock went down the long (500 ft.) driveway, crossed the street and waited for a bus in a little store that is about 100 feet beyond the pub. That store had a bit of everything—produce, meat, an amazing variety of candy bars, sweets in an enclosed case, newspapers, even ice cream sticks, all in a space of about 10’ x 12’. Half of us waited in the store while the others hunkered against the outside wall out of the rain.

The bus came—about a 20-passenger eco-bus (that’s what it said on the side, eco-bus)—with one woman driving and the other, Jane, narrating. Another group was also on the bus and it was filled except for two seats that were being held for people who would catch it further up the road. We stopped briefly to see a few birds— Shelducks, black swans, etc. Jane told us that all the green grass that is everywhere came from Wales—all the hillsides used to be covered with dry tussock grass.

The bus took us to a smallish boat—carrying perhaps 50 passengers–that was covered but we could leave our seats and go out through doors to the decks. It was very cold. We were out about an hour looking at albatross from below the cliffs where we’d been the night before. The ship’s captain pointed out some bunkers on the edge of the bay that dated to the early 1900s when people in New Zealand were afraid the Russians were going to invade. This was called the Great Russian Scare.

He said that 30 albatross eggs are being incubated this year. These large birds have a slow reproduction rate, breeding at 6-10 years of age and raising one chick every two years. Albatross have a tendon that stretches across their back that aids with soaring when wings are outstretched for hours at a time. They are at sea for many years before coming back to breed. 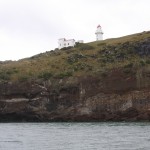 got on the bus again and looped around some lakes or bays and went way up a hill on a narrow, bumpy, dirt road. The bus really kept up speed. Sheep were running everywhere. Most seaside land in New Zealand is owned by the government but two property owners own the lands along this road and allow eco-groups in. There was another bus with ours now.

The two buses parked at the top of a very high bluff and we walked down a steep, narrow road, watching out for sheep droppings—the air smelled strongly of sheep! The road became a path to the beach and we began to have sunlight. Just as we were approaching the beach a yellow-eyed penguin appeared on the left side of the trail. I whipped up my
camera, removed the lens cover, and snapped a picture. This was the only picture I would 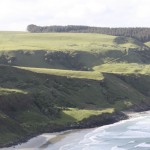 get of these penguins because right then my memory card filled. I’d brought another one but, of course, it was in my little day pack in the locked bus, the first time I’d gone anywhere without it on my back. So Tom had to be in charge of penguin photos. I found that it was a relief in a way to not be able to use my camera. All my attention could be focused on observing.

When we reached the beach we saw a large sea lion just lying on the sand, quite docile. Sea lions disappeared from this beach 20 years ago and then returned. One pregnant female came. There are about 150 sea lions in New Zealand, and they are uncommon where we were. Females rarely come up on this beach because of the males. We were told that sea lions are usually found on the sand while the fur seals tend to stay on the rocks. 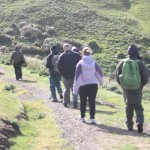 We watched some penguins toddle up out of the ocean—so cute. They kind of hopped their way up the grassy hillside toward the shelter of scattered shrubs. Our trip had been scheduled to coincide with their emerging from the ocean after a long day at sea. They are an endangered species and in 2004 a disease killed 60% of the young here on the Ortaga peninsula. The guide said they now appear to be starving and that perhaps there is no longer enough krill for them. Nesting boxes have been built into the hillside to help these charming birds. We saw several burrows they’d dug into the hill and one at the far end of a roofed blind, was nesting. At one point a penguin hopping up the hill met a sheep, about the same height, and for a minute they just stood, face to face about five feet apart before the shee 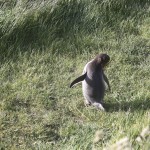 p moved on. Would have made a good picture. The sun was beginning to set so we turned back and hiked back up the hill to the buses where we waited about 20 minutes until another part of the group, who had gone to see a fur seal colony, returned. By the time we got back to the motel and went across the street to the pub for dinner it was nearly nine o’clock. It had been a long and enriching day.