After eating lunch along the trail (trails in New Zealand are called tracks so we had walked along the Hooker Valley Track at Mt. Cook), we returned to the parking lot where we saw a redpoll and 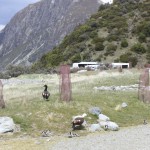 the pictured Paradise Shelducks with their young. These large ducks are endemic to New Zealand. Unlike most birds the female is the more striking with her completely white head.

We returned the short distance to the wetlands in the lower part of the valley to search for birds. And this time we were successful! The wind was blowing very hard and we were pleased to discover that our vehicle made a good bird blind. We could observe and the birds weren’t spooked. 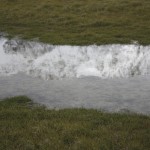 When we had stopped at this spot on our way up I took a few pictures of the surrounding area, including reflections in some tiny ponds. The valley spreads out here as a result of water from melting glaciers and the wandering of the river, often described as a braided river. Apparently in the 19th century a German geologist who came to New Zealand gave many places their names. Hooker Valley was named for a German botanist who had never been to this country. No hookers. 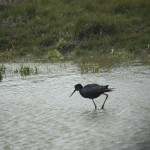 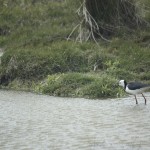 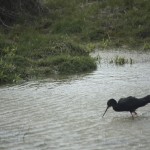 We saw two kinds of stilts here, the Australian Pied Stilt and the rare Black Stilt and were able to get photos. The wind was nearly blowing the poor birds over and they staggered about a bit to keep their balance. We also spotted Banded Dotterels, Shags and an Australasian Harrier.

From there we went to the Conservation Center for a half hour where I bought a book on the Birds of New Zealand and some postcards for grandchildren. It was a really interesting place with natural history exhibits, and downstairs some climbing displays that included a diorama of the first woman to climb Mt. Cook (1910) and other nearby peaks, Emmeline Freda Du Faur. http://en.
wikipedia.org/wiki/Freda_Du_Faur
I’d like to have spent more time there. 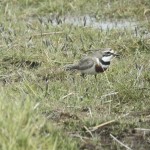