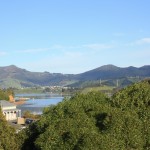 Sunny day view from our motel in Portobello

We had a rather leisurely drive from Portobello to Arrowtown. But before leaving Portobello we walked along the bay not far from the motel to look for the Sacred Kingfisher. Taren had seen it while the rest of us were gone the day before. The sun was shining, a beautiful morning. And we did finally spot this small greenish blue bird with its buff belly. The tide was out and the bird flew low above the tidal flats before perching on an overhanging branch. It seldom dives into deep water as ours do but feeds on insects in and above tidal flats. The Sacred Kingfisher makes a nesting burrow into a dirt bank as ours does or sometimes excavates into a suitable tree.

From there we drove up a very winding narrow road-quite high above the ocean and towns. I could see out across the hills where sheep were white polkadots on the green fields and there were lovely views down to the sea. 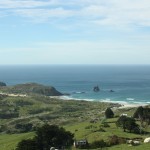 Near the top of the hills was a castle and we could see one turret—like a rook in chess—with a flag. It is the only castle in New Zealand and was built by a very wealthy man, William Larnach, in 1871. Apparently he went broke before finishing it and committed suicide. Today the castle is privately owned and because fees are charged for entry we turned around.

As we followed the winding road down the other side Derek spotted a road-kill possum and asked Taren to stop so he could pick it up to show to us. Most of the possums in Oregon and California that I’ve seen have been road-kills and even the live ones I’ve seen I’ve thought ugly and probably no 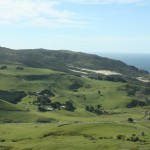 t very bright. For one thing their heads are quite small with not a lot of brain room. For another, they seem to keep getting run over, which does make one wonder about their thinking capacity. So there I was saying a bit sarcastically, “ He just walked back to pick up a road-kill possum to show us.” I soon apologized. Their possums are actually beautiful!

The creature had long, soft, bushy fur, long fox-like ears, and a bushy tail! Derek said it was a female and that they generally have only one offspring a year. These Common Brush-Tailed Possums were imported from Australia in l837 for their fur. Of course, as with many other get-rich import schemes, it backfired. In New Zealand there are no predators to eat the possum. Today one fur is worth three dollars and you can get $100 or more for a kilo depending on the market. Derek said that on the property he owns he kills and skins them. The fur is often used in clothing and frequently combined with marino sheep wool to form hats, scarves, gloves and other items.

The possums live mainly in hardwood forests and are quite destructive. They feed mostly on leaves but will also eat bugs and flowers, fruits, ferns, bark, fungi, invertebrates, native birds and eggs, land snails and carrion. They particularly like new growth of shrubs and trees and ignore the older leaves. By the 1980s their population was estimated to be 60-70 million in New Zealand. By using strict control measures it was thought in 2009 the population was down to 30 million.

“Possums are vectors of bovine tuberculosis, which is a major threat to the dairy, beef, and deer-farming industries. The disease is endemic in possums across about 38% of New Zealand.” Through a nationwide program the Animal Health Board aims to eradicate the disease by 2026. They “are controlled through a combination of trapping, ground-baiting and, where other methods are impractical, aerial treatment with 1080 poison.” Here in the U.S. 1 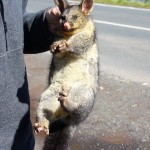 080 is considered by many to be far too destructive to other animals when placed in carrion for something like coyote control. The numbers taken for fur is rising and has almost equaled the numbers killed in poisoning. A number of New Zealand companies are exporting possum carcasses to Taiwan, Hong Kong and Malaysia for human consumption, where possum is regarded as a delicacy and known as “Kiwi bear”. (Wikipedia)

According to the National Geographic.com news these marsupials can munch half a pound of foliage a day and prey on the eggs and chicks of endangered birds like the kokako, keneru, and kiwi. New Zealand has a meat-eating giant land snail (the only meat-eating species found in the world) that possums also eat. These nocturnal creatures have had a major impact on many bird species as well as on forests. We noticed on many of our short hikes that there were traplines along the trails. Small plastic triangles were attached to trees (similar to our cross-country ski trail triangles) and were color-coded to let you know what was going on. Usually we would see a small box off the trail that contained traps and there were signs warning hikers to stay on the trail.

We ate lunch at the Wild Walnut Café in the town of Lawrence where I had perfect fried eggs (over medium), tomatoes, toast, bacon and coffee. The cafe has a patio decorated with a mural (see photo). Lawrence today has a population of 474. It was Otaga’s first gold-rush town and had a population that peaked at 11,500. Bicycles are common in this part of New Zealand and we saw a number of runners as well. A large sig 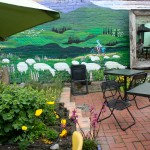