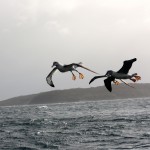 Breakfast in our room this morning and then we met a few minutes before 8:00 out in front of the motel to walk about half a mile to the boat dock with the rain blowing sideways from the strong wind. Our boat was the Aurora. There were eight of us on the boat plus another passenger who was from Wellington.

Our captain was very friendly and knowledgeable, but between my hearing and his accent I missed a 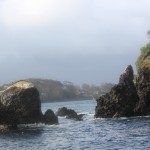 few of his stories. The sun came out right at the time we saw crested penguins along the shore, four of them standing on the rocks. Then clouds would come in and then sunlight again. We had mostly good weather the whole day, although windy. I wore long underwear, my new pants and rain pants over those. On top I had a long-sleeved shirt, a sweater, my fleece jacket and Tom’s rain jacket (because mine leaked). 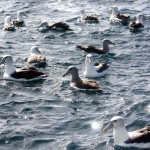 we were further out, the captain tossed cod overboard and the albatrosses came swarming: white tops, Salvin’s (gray neck and head), Southern Royal and Northern Royal; a skua, white-fronted terns, red-billed gulls, and more. We saw a few fur seals up on the rocks and pulled into one cove where shags were nesting in the trees along the shore.

Then we went into a cove with a small sandy beach and little dock and all f us got out. A shelter there had a big sign about invasive species. This was Ulva Island, part of Rakiura National Park, “Undisturbed podocarp”(conifer) forest. There have never been predators except for rats and these have been eliminated.  We ran our boots over a brush as we disembarked. 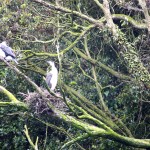 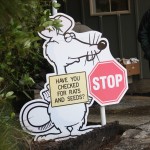 a history of Maori living here. Maori used to come to the island to strip the bark from the totara trees to use for storing mutton birds (sooty shearwaters). Kakas also will strip bark from the totara looking for grubs and sap. It is believed that some of the Maori activity occurred 100-200 years ago. A post office was established here at Post Office Bay and a flag raised when the mail was delivered so that scattered settlers could come from other areas along the inlet to get their mail.

We walked to the other side of the island where there was a much nicer beach and it was more protected. There were big cypress trees and radiata (Monterey) pines that had trunks several feet in diameter. The cones were large and needles short. We ate sack lunches in the shelter 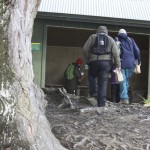 . These box lunches were big: a sandwich, fruit, nuts, brownie, juice, etc. There was a cylindrical outhouse just behind the shelter—no toilet paper but painted a cheerful, bright, sunny yellow inside and green outside.

Then we hiked about a mile through dense forest where we saw totara trees. Birds we observed in this forest included a brown creeper and robins (very tame) and a tomtit on the beech area (bla 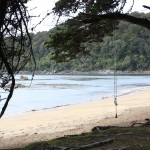 ck and white). Before lunch we also saw yellow-eyed penguins swimming near where terns were very active.

Back at the shelter we returned to the dock area and got into a little “water taxi” driven by a man from Australia. It was tiny-just holding all of us. The boat had a 200-hp engine and off we went, rolling through the choppy seas and back to the dock at Half Moon Bay.

We ate dinner at the hotel again. Last night I had beer-battered blue cod, and lemon meringue pie for dessert. Tonight I tried the venison kebobs and salad. It was okay –but needed the accompanying yogurt sauce. Dessert for me was a small berry Sunday. I wasn’t having alcohol that night but Taryn came in with a large bottle of beer and insisted on pouring me some “Wild Buck”; not much though so I was fine with that. 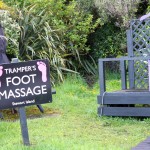 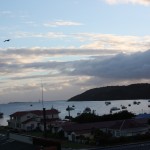 Things are drawing to a close. Tomorrow we take the ferry boat back to the mainland and then drive to Dunedan. Sometimes on a day I’ve been ready to go home but always something interesting has happened and I’ve been glad I was here.