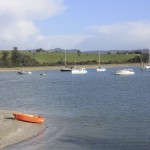 We were still north of Auckland and had explored a bit on one side of the narrow stretch of land between the Hauraki Gjulf and the other side toward the Tasman Sea. 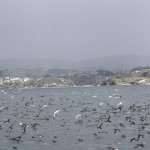 View from the Norma Jean

The name of the small charter boat that was to take us on this day’s adventure was The Norma Jean. Yes, that Norma Jean. And our captain was quite a character. He was 69, he told me. He was medium height and stocky, had a short beard, tattoos, and wore brown clogs, a T-shirt, and shorts. When the wind got chilly he’d put on a pullover sweater. He was cheerful and chatty, pointing out things of interest as we traveled. Another man helped him with the boat when he needed to be out on the deck or had other things to do.

Most of the time I rode inside with the captain although sometimes I’d go out on the back platform where most rode and sometimes on the narrow sides. He asked me how old I was and when I told him my 76th birthday would be in December he was delighted to learn we were both Sagittarians. His birthday, he told me, was the 14th and he said his mother had given birth to him when she was 47. He showed me the scar on his knee from knee replacement surgery and said he wants the other one done as well. The captain mows lawns as part of his way of making a living and told me he had two sons one of whom is 6’4” tall who plays basketball. He had photos of himself on the wall from when he used to fly helicopters. No one is what they seem at first glance and those I met in New Zealand were rich in their life experiences.

In addition to socializing on this day I also saw, as did the rest of our group: blue penguins in the water, gannets, shags perched in trees along a bay where the water was calm and there was almost no wind, white-fronted terns and others.

At one point we were offered hot chocolate (water was brought to a boil on a 2-burner stove} and cookies! Unfortunately my notes don’t show what we did after returning to the dock. Some days it was really good that I wrote things down. It’s hard to digest everything that takes place and remember which day an event occurred.

The following morning (November 14) we were up early, leaving at 6:00 a.m., and stopping in a little town for coffee to go–$6 for a decaf mocha. The owner of the coffee shop was from Santa Barbara and was happy to talk to our couple from that city. In addition to a home in New Zealand he owned a condo in California. We drove through a small town that did a great job with their seashore area, making a long park with green lawns and playground equipment between the bay and the highway. Shoreline property in New Zealand is government owned. It was a lovely day with the sun slanting through the trees and sparkling on the water.

We went first to a wetlands visitor center (Miranda Trust Shorebird Centre) to view the migration pattern of the Godwit. It goes from Alaska to China and back to Alaska by different routes. Its habitat is disappearing in China. The Godwit’s migratory flight is the longest non-stop flight that’s known.

We are used to seeing birds that have bills that curve downward (such as some sandpipers) and upward (avocets) but on this day we saw some whose beaks curve to one side. The wrybill, a small plover found only in New Zealand and whose population is about 5,000, sports a bill that curves to the right and is believed to have become that way through years of prying food out of glacial gravel. Today this is an advantage on mudflats (tidal flats). 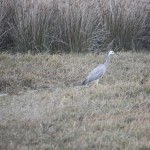 For some time we drove through miles of countryside where everything was green: grass, shrubs, trees and lovely, rolling hills. Some of the hillsides looked as if sheep and cattle had overgrazed and there were soil slumps. In other places stream banks appeared damaged by erosion. We were treated to seeing a wave of sheep running down a hillside, like sea foam across the green slopes, with a sheep dog right at their heels. We pulled over for a few minutes to watch. One lamb was left behind but we felt better when we saw the rancher on his little tractor coming down the hill, towing a trailer to help any such forlorn stragglers. Some of the water containers in the fields- concrete, round structures- open at the top—had basketballs in them. When Tom pointed this out he said that this way the rancher can drive or walk by and, from a distance, discern whether or not water needs to be added. 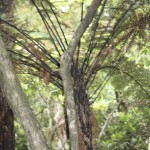 Close-up of a fern tree

Later we walked in Pureora Forest in an area that was heavily logged by their Forest Service. Enough old growth remains to be able to see what it used to look like though. Podocarps are conifers that date “back to the time when New Zealand was part of the super continent of Gondwana” . (New Zealand Dep. of Conservation). A local person became an activist and was involved in stopping the logging, leading the way to save them. Podocarp forests, similar to rainforests, often contain a dense growth of understory trees and this area supported many of the big tree ferns as well as broad-leafed trees. There was a 12 -meter high tower right by one of the large trees and most of us climbed the steep stairs for a better view of the forest and the towering rimu tree. 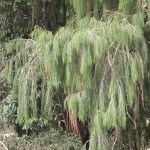 That night we stopped at Creel Lodge, located at the southern end of Lake Taupo along the Tongariro River. This river is apparently one of the best places to fish in New Zealand. And the motel was another welcoming place to stay, surrounded by shrubs and flowers. We would be here two nights.

A bit of trivia: I saw a road sign that said “papa toe toc”.

Pedestrians don’t have much clout in New Zealand and instead of having “Yield” signs aimed at pedestrians they say “Give Way”.

We drove through the Sheep Shearing Capital of the World.

A sign on a van said “Nos petit Maison” (Our Little House).

We drove past a sign saying Whakapapa National Park, an area with thermal pools and steam vents. Much of New Zealand has been or is volcanic, particularly the North Island.