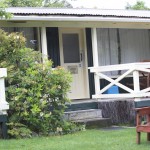 We donned raingear and walked along the river trail first thing in the morning after breakfast. Now and then the sun came out and cheered us onward. Others were also walking the trail: joggers, a family pushing a stroller. We stood on a footbridge looking at the river then went back to our rooms, changed a few clothes and drove up to Tongariro National Park. This park is New Zealand’s oldest national park (1887) and the fourth oldest in the world. It is a “dual World Heritage area, a status which recognizes the park’s important Maori cultural and spiritual associations as well as its outstanding volcanic features.” (Department of Conservation) 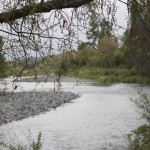 We stopped first at a pier that sticks out into a bay of Lake Taupo. Lake Taupo is the largest lake, by surface area, in New Zealand and is drained by the Waikato River. The lake is stocked with rainbow and brown trout.

By now the wind was driving the rain so hard that sometimes it stung our cheeks. It was difficult to see very far and all that was visible were a few ducks and grebes. We found the visitor center had a lot of information including much on the Maori traditions. If the weather had been better we could have seen snow-covered volcanic cones close by. We walked beyond the visitor center to a trail that crossed a rushing, tumbling, roaring stream. Even though it was pouring rain we were able to see a blue duck in the midst of all this water. They are a rare bird and one of only a few ducks that thrive on rough water. Their bill is especially adapted to edging algae off rocks. We tried to find the tiny, greenish rifleman, New Zealand’s smallest bird. We searched and searched among the dripping trees and shrubs but no luck. Then, on the way back along the trail, one of our group spotted one and we were all able to see it (in the trees behind the restrooms!). The little bird reminded me of our brown creepers but was very active.

We drove back to the pier on Lake Taupo again and were walking along the road away from the open water when we saw a pair of those big, black birds with red heads, long legs and a habit of flicking their tails as they did a slow dance across the road—Pukeko. Derek came down with us then and spotted a fern bird perched on a twig—dark brown stripes, towhee sized and calling. He told us that the kind of fog-horn sound we’d been hearing was made by a bittern. So glad I could hear it! We went back to our motel and put clothes out on the decks to dry as the sun was now streaming warmly from blue sky.

Sunday, November 16th –we hurried to leave the motel and head toward Welllington to catch a flight to Blenheim. We ate continental breakfasts in our rooms but everyone else was waiting for us when we finally were ready, Derek standing there with arms crossed. Not a good sign.

Derek said that the little towns along this route like to be known for something. The town of Bulls was n 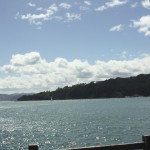 amed after James Bull. And the locals love puns associated with that name. For instance, they have a const-a-bull. And “New Zealand drinks milk from Bulls”. A pharmacy is “Indispense-a-bull “. The town of Taihape is known for making gumboots and there is a large statue of a boot along the street. Hunterville is known for its sheep dogs and has a statue of a huntaway, a herding dog that barks to direct the sheep.

The town of Welllington, the capital of New Zealand, is quite pretty to drive into—a bright, clean city with parks along the oceanfront and sailboats. It is a busy place with lots of traffic. We saw many people at a large farmers’ market. Wellington has become known for the area’s association with the Lord of the Rings Trilogy and, indeed, the airport terminal has large overhead creatures, including a raven in one room and Gollum, who, with outstretched fingers, hovers above the dining tables. A large sign on the outside of the airport terminal says “Middle of Middle Earth”. One can sign up for any number of tours associated with the Trilogy and visit various places where the movie was made.

Our plane flight from the North Island to the South Island provided a great view of both shorelines—like flying at a low level over a three-dimensional map. At Blenheim our group was joined by Taryn, who brought a van for us to use on the South Island and who was our driver from here on. She also helped keep track of us when we scattered at various sites or became too engrossed in our photography to notice that we needed to be moving on. She was upbeat, cheerful and a good addition to our group, allowing Derek to focus more on
our sighting 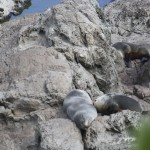 On the way to our motel we stopped at the Oahu Fur Seal Sanctuary and took a few photos of the fur seals on the rocks below us. One very large pup was nursing.

When we pulled in 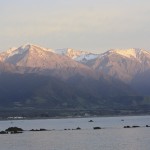 to the Blue Seas Motel in Kaikoura, “The Whale Capital of the South Pacific”, I felt as if I were finally seeing what I’d imagined New Zealand to be— with the Pacific Ocean in front and snowy, rugged mountains rising above.