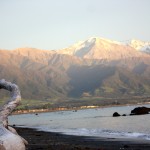 The snowy mountains seemed to be pulling morning light from the sky—alpenglow! We’d awakened at 5:30 and a glance out the window showed faint pink, reason to throw on clothes, grab my camera and cross the street to the beach. I snapped pictures, walked a few feet and took some more. The water was lapping quietly at the shore and a few ducks glided nearby. Tom joined me after a while and we walked along the edge of the highway,which had almost no traffic at this hour, then came back along the beach which was scattered with pure white, thin, very smooth rocks. I put a small one in my pocket. On the way back from the beach I stopped to talk to a young woman who was pushing a 3-month old baby in a stroller. She said she was from Australia originally but “I married a Kiwi”.  (New Zealander) The baby, a boy named Rohan, had awakened her at 4:30 a.m. We agreed that one “advantage” of having a baby is that one gets to see a lot of beautiful sunrises.

We ate a continental breakfast in our room and then showered. We found the motels in New Zealand had a variety of amenities that are unusual in the United States. This one had an electric shower with a small box attached. A knob on the box is turned to increase or decrease the temperature of the water.

Soon the mountains, the Seaward Kaikoura Range, were once again behind dark clouds. These mountains form the northernmost part of the Southern Alps. The Clarence River Valley separates the Seaward Kaikouras from the parallel inland range. One of the delightful things about New Zealand for me was the frequent viewing of mountains adjacent to the sea.

After breakfast we drove to the ferry departure building, filled with people milling about waiting for the boat. We watched a film on safety and whales, then boarded and sat inside. The captain narrated some information and showed a film on different aspects of the sperm whale. Off and on during the trip the captain provided interesting information about whales and other inhabitants of this part of the ocean. He was good—no constant lecturing and interesting, short presentations. 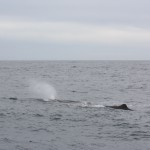 Sperm whales’ main sources of food are squid and fish, particularly the giant squid of the ocean depths. They can dive over 3,000 feet. Ambergris, a waste product found in their intestines, is still used in some perfumes. In the whaling days a wax substance called spermaceti was used in lubricants, oil lamps and candles. Spermaceti fills their unusually large heads and is believed to be used in providing buoyancy when they dive. Whalers once thought that the spermaceti was actually sperm. Their heads are 40% of their body and, according to NOAA, they have “the largest brain known for any creature that has lived on earth”. 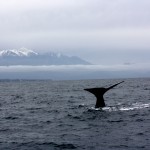 Ordinarily I would want to be outside on a trip like this but we were happy to stay inside until there was some action. The ocean was a somber steel gray and the wind cold. When a whale was spotted we rushed out on the misty prow while some people went up to the 2nd deck. We were able to see a male sperm whale,
18-20 meters in size, as he blew spray into the air and maneuvered his body near the surface. The captain, familiar with the habits of whales, could tell us when the whale had taken in enough air and was about to dive and I was able to get a couple of pictures of his tail fluke as this enormous creature disappeared into the ocean. 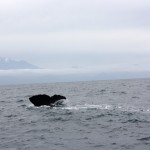 r we made our way out onto the deck again to view orcas. Sometimes I had a hard time seeing because taller people lined the edge of the boat in front of me. But I was able to wiggle (elbow) through and get a few photos. There was a pair of orcas and two young ones. I’d seen orcas before in the Pacific Northwest but not this close. Damp, chilly weather fades into the background when these opportunities arise! 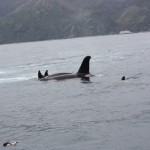 After the ferry boat returned to shore we drove up to a park along the coast and walked along a road where we spotted yellow hammers and winged petrels, tall birds with long legs that one of our group said looked like giant sandpipers.

The next day we were scheduled to swim with dolphins.