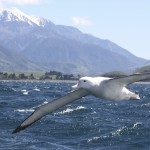 mentioned I need Dramamine for ocean trips? And probably merry-go-rounds?

The water this day (November 18th) was quite rough and choppy. We were in a little boat, just our group, and the captain bounced us out –whump- whump- whump- into the ocean very quickly. Lots of spray flying up and Taryn got wet almost at once although smiling the whole time. It was a sunny day though, a beautiful day with the snowy mountain tops contrasting with the bright green lower slopes. 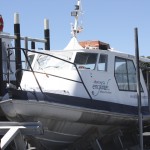 When we stopped, the captain tossed a cylindrical, wire container filled with food over the edge of the rocking boat to entice the birds. And we were soon surrounded by petrels and albatrosses of various kinds, including the Royal Albatross, whose wing-span may reach nearly 10 feet. They formed a quite vocally noisy gathering with more arriving at a steady pace. Wings were flapping, spraying up water, and beaks jabbing in competition
for the food. I took many pictures but also paused to admire the snowy mountains and the striking appearance of the hovering birds against them as they came to land with feet outstretched. 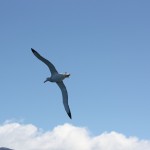 You get used to staggering about on the deck, trying to hold the camera steady with one hand, while grabbing onto the edge of the boat with the other. I also spotted a shark’s fin in the distance, which, according to the captain, was probably a great white shark.

People took hundreds of photos. I finally decided I had enough and stopped. Tom’s memory card ran out and his other was back at the motel so I took a few more than I might have otherwis 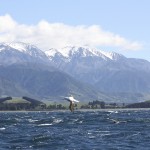 e to make up for it. I guess you take a lot of pictures so that one might be that perfect shot but then what? This trip offered a choice of hot chocolate or tea but the tea kettles were cast iron
and quite heavy so we took care in lifting. And there were cookies!

We rode over to a granitic appearing bluff to look at some fur seals and saw a white-fronted tern there. I love the terns—they are so sleek and graceful in their flight.

Then we went searching for dolphins in case the dolphin swim got cancelled. We ran into many of the dusky dolphins. I’ve seen dolphins in large groups once before, when we went out on Monterey Bay with the Cheesemans a couple of years ago and fell in love with them. They frolic through the water, there is just no doubt about it, and between the jumps 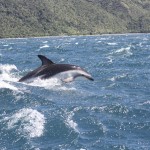 and twists and ups and downs they seem to be smiling, as if having the most fun in the world. I took many pictures but knew from the past experience my reflexes might not be quick enough to halt one in mid-leap. I’d aim where I thought one would surface and it either wouldn’t or would so quickly 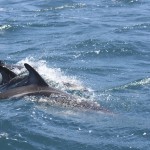 that my finger couldn’t press the button fast enough. Their smooth, shining skins reflected the sunlight and the surface of the water was filled with their splashing.

From there we tempted birds one more time and then headed for shore. It was much smoother on the return trip.

We ate lunch outside a small cafe, sitting in the sun at nice wooden tables. Those having hot tea were served with a shiny teapot, a little pitcher of cream and white porcelain cup.

After lunch we learned that the water was too rough (too much wind) for swimming with dolphins and we got refunds as this had been an extra excursion if we wanted it. The dive would have required a wetsuit and I’ve never been swimming in the ocean so had mixed feelings about the cancellation, part of which was “drat” and part “whew”. 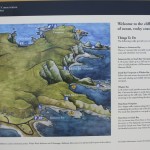 Harry and I started up the trail. We were the only ones who wanted to hike after Tarney drove us to a trailhead. The others went to the aquarium and the museum. The plan was to hike up and over the hill and back down to a place where we’d been the day before where the van would meet us..

Harry was the senior member of our group but was in good physical condition and we both hiked right along, stopping to look at various birds in the area. We had a bea 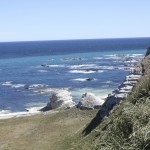 utiful hike although it was hard to stay upright in the strong wind gusts. To our left were the green hills and beyond them snow-capped mountains; and to the right the ocean with whitecaps and breakers foaming on rocky outcroppings. These bluff were limestone and chalky white cliffs dropped off to the sea below. There were a number of other people hiking, most much younger than we were. We saw a skylark climb skyward, singing its lovely song, and spotted a yellowhammer and other songbirds.

Maori interpretive signs were posted here and there and one told how the Maori had learned to eat shearwaters. After killing the birds they would store some in seaweed for up to two years.

After hiking a couple of miles we finally reached the far trailhead, switch-backing down to the parking lot, only to discover we’d been expected an hour earlier. Two of our group had stayed in case we came down the trail and the others had driven back to where we started to see whether we w 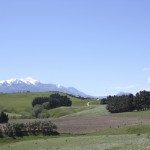 ere there. I hadn’t realized there was a set time to be back, although I guess I should have. I know I was beginning to worry about how long it was taking us and had suggested fewer stops for bird watchings but felt really badly about missing a deadline and having people worry about us. Thank goodness for cell phones.