“No overtaking trucks while they are in the tunnel”. This sounds like good advice to me and was posted 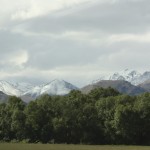 on a sign just outside of Kaikoura along a two-lane highway. This was a long day of mostly riding in the van. I’m including my notes to give a brief overview of the countryside we were passing through and a somewhat typical driving day.

Hills were painted yellow with Scotch Broom—one of our many surprises was that Scotch Broom covered many hills, very pretty but I know in the Eugene area there is every effort to get rid of this invasive species.
A triangular sign said Alpine Pacific Triangle.
Kiwi Rail Train—a very small train.

Fields of black currents, which are used for juice and are harvested by machine.

Lovely green fields—divided by narrow, tall hedges of trees. Hay is in rolls. Grapes and wineries are frequent. In spite of the amount of time spent in the van on this day we saw a number of different kinds of birds.

We stopped to look at a large, enclosed herd of red deer.

Around 11 a.m. we passed through the town of Amberley.
• A sign said : “Amberley, take your time”. Someone had scratched out part of it and it now read “take your pills”. And somewhere in the area was a sign that said “If at first you don’t succeed scuba diving isn’t for you”.

We stopped at the Ashley River Mouth Restoration site at Waikuku Beach.

We drove through Christchurch and by 2:30 were looking across very flat, green fields, some bright with yellow flowers and dotted with sheep, all backed by snowy mountains on the horizon, reminding me a bit of the Wallowa Mountains area in eastern Oregon. 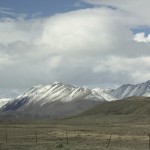 We passed a sign for Mt. Dobson Ski Area with an arrow pointing to the right. Lake Tekapo was our next stop , a very large, aquamarine reservoir that had been a natural lake left behind by retreating glaciers but now was dammed to raise the water level and use for hydropower. 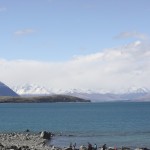 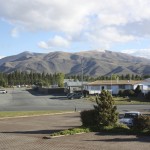 We would be at our next motel, a few miles from the lake, in the little town of Twizle, for three nights. Twizle has a population of about 1200 although this number is nearly tripled during tourist seasons. It was originally built as a place to for the men working on the hydropower projects to stay and some buildings, still being used, were meant to be torn down after the projects were completed. Today the town serves tourists and recreational users who come to ski, boat, hike, etc. The area also has some of the darkest, cleanest and driest skies in the world and draws astronomers as well as providing astro-tours. According to Wikipedia: “Since 2012 Twizle has been a part of the Aoraki Mackenzie International Dark-Sky Reserve, one of only five such reserves in the world recognized by the International Dark-Sky Association. “ 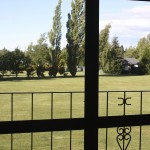 But we weren’t here for dark skies, we were here for birds and I noticed fairly soon that we had starlings nesting in the downspout next to our balcony, the parents frequently coming and going. We were in room 120 with a view across a large lawn and, in the distance, snowy mountains. There were two queen-sized beds and a big heater was set into the wall. By now we were more than ready to go downstairs for dinner—

The next day our goal was Mt. Cook.