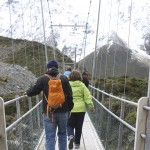 This was our Mt. Cook day. After a big buffet breakfast (dinners were buffet too) at our motel (MacKenzie Country Inn in Twizel) we drove to a place where we could purchase lunch to take with us and then to a wetland area near the mountains to look for stilts but didn’t spot any. From there we drove to the beginning of a trail that goes to Mt. Cook, elevation 12, 316 ft. We were surrounded on all sides by steep, rugged mountains. We used the restrooms, loaded up our cameras and hiked. It was very blustery and overcast. But we could see Mt. Cook! There were many other people on the trail, including a large group on a tour. We didn’t hike fast, kind of going with the lowest denominator of our group. Wooden steps filled with gravel formed part of the trail.

Along this winding path, that follows the Hooker River to its source, grew a prickly shrub that’s quite common—a little like our ceanothus–Matagouri, sometimes called Wild Irishman 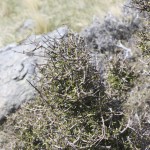 . It has small, leathery leaves and long thorns that were sometimes used by early Moari for tattoo needles. The flowers make very good honey. These hardy plants grow in poor soil and 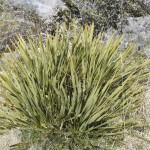 can fix nitrogen, as do legumes. Spear Grass, sometimes called Spaniard, is also found in this area. Spear Grass has tough blades that look almost like a sword, and flowers clustered on long stems although they weren’t in bloom when we were there.

I was quite p 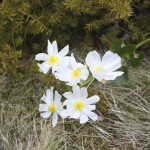 leased with myself to spot the first Mt. Cook Lily, even though it’s not a lily. What caught my eye were the large white flowers nestled in among the shrubs. They are actually a giant buttercup with big, round leaves and are found in alpine regions of the South Island. While most plants have stomata (openings) on the underneath of their leaves the Mt. Cook Lilies have them on both sides. Because they grow in rocky areas the underside of the leaf is often warmed by the heat of the rocks in the summer and, by having stomata on the top as well, this clever plant can close those on the bottom to keep from losing too much moisture. It was good to see this striking flower on what otherwise seemed an almost winter day.

We went across two swinging bridges over water murky with glacial melt, and there was another about a half mile further up the trail—we could barely see it from where we stopped. The bridges had signs on them that said “Limit of 20”. Being who I am I did rapid counts before getting on one. Kind of pointless I guess because there were children trying to make them swing. Although it was cloudy we were fortunate to be able to see the mountains rising steeply ahead of us, sometimes through heavy fog and sometimes quite clearly. 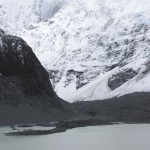 a couple from Texas who were on their way back and they told me they went to the end of the trail, about three-quarters of a mile beyond where we stopped. They said there was a lake with chunks of ice in it, like miniature icebergs, but that it was very cold and very windy there.

Now and then we could hear an avalanche coming off the mountain. Derek had thought it wise to turn back so that we could search the wetlands for birds on our way out and because th 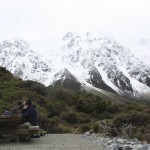 e wind was getting stronger. He said he had once had to stop this hike with another group because the winds had gotten so fierce. We ate lunch at a picnic table along the trail where we had to hold firmly to anything that could blow away.