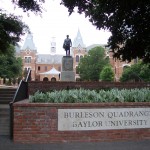 nded by another customer at an IHop (where we didn’t want to wait 15 minutes to be seated).

Just went past something that looked like a big salt-evaporation pond.

In Texas now. Went through Hobbs.

Irrigated pasture on both sides.

Radio talking about cattle prices, crops and weather. Wildlife report on bobwhite and deer. Recent rains have been helpful. Biggest crops are corn, soybeans and wheat.

4:15: Leaving a rest stop. We ate the other half of yesterday’s sub sandwich for lunch and drank iced tea. Nice rest stop–tiled walls. Shelters outside, covered and with curved, brick wind-protection walls. I found two dead baby birds on a sidewalk—looked up and there was a fluffy nest—think the wind might have blown it apart.

Another traveler at the rest stop, a Texan, said we were headed toward God’s Country. I looked on the map and could see lakes and trees ahead rather than the long miles of dryness. Sign for Abilene: BBQ, Boots and Cultural Pursuits.

Halfway to Coleman on Hwy 84. Much greener. More trees. Some creeks with water. Can tell it rained here today from dampness along road.

Milkshakes at a DQ in the small town of Santa Anna, population a little over 1,000. Nice old houses. Brick buildings downtown. The girl at the DQ said, “sir” to Tom.

Next Day: Just had breakfast at an IHop in Waco. Got to the motel last night, about 11 p.m. and a staff member had rented our room to a different traveler. Much consternation at front desk. Gave us a nice room. The IHop was the first place I’ve eaten where we were a racial minority. Cute kids at the table near us.Waco was built on the site of “an ancient agricultural village of Waco Indians” who were later driven out by Cherokees.

We visited Baylor University since it was close by. Pretty campus. It’s a Baptist campus established in 1845. Many of the older buildings are red brick with white trim. A domed campanile. A new stadium being built. Very hot here though and muggy. A little creek runs through the campus and doves and great-tailed grackles were enjoying it. The grackles, once found only in S. America and S. Texas, are noisy and congregate in parking lots (like English Sparrows) and, according to an article in a 2013 USA Today, are considered pests. Brazos River runs through campus. The original name of the river, Rio do los Brazos de Dios, translated as “River of the Arms of God”, and was named by early Spanish explorers, according to Wikipedia. 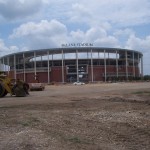