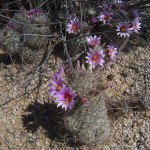 I’d traveled across part of Arizona and as far as El Paso, Texas many years ago, without stopping, but my familiarity with the desert world has been mostly from magazine photos and the writings of various authors. This trip impressed me with the vast amount of desert land we have in the United States. Although the weather was hot and humid the presence of the “monsoons” at this time of year provided momentary relief with frequent, brief storms, usually in the afternoon and accompanied by lightning and thunder. Miles and miles of flat, dry lands covered with sagebrush, or in some places, cactus, were framed by sheer walls of layered rock and above these often colorful walls were clouds, puffy and white, although sometimes taking on a menacing darkness as a storm progressed. In one place we might be exposed to intense rainfall while, a few miles farther along, the pavement was dry and the only clouds those perched above the rock rims.

Heading into the desert of Arizona, we drove into hard rain accompanied by lightning and thunder. The rain felt good, a downpour that reminded me of Oregon. Our GPS was working fine at that time and took us right to our motel in Tucson. Palm trees along the parking lot, mountains in the distance. This is where we discovered Cracker Barrel restaurants and found their meals some of the best on our trip.

The next morning we went to find an acquaintance, Saralaine, with whom I’d communicated by phone and email but had never met. She belongs to an organization I recently joined (Great Old Broads for Wilderness) and had asked us to stop by if we had the chance. We programmed the GPS and off we went. I am totally inexperienced with desert living and, as well as being a chance to meet her in person, it was an opportunity to get off the main highway and have closer contact with a new environment.

First we traveled on a paved road, with helpful signs like “Don’t continue if flooded” and then a graveled one. The contrasts in desert areas, I learned as we traveled, include very hot, dry weather, windstorms, dust storms (and signs warning of their possibility) and flash floods. In the winter there may be ice. There were enough people living scattered throughout this area to support a high school, which surprised us. And not far away was Saguaro National Monument.

Saralaine greeted us cheerfully and showed us around her property suggesting we proceed quickly before the sun got any hotter—we’d been later arriving than our original estimate. Mule deer live nearby as well as wood rats. Bleached antlers rest on her fireplace hearth. I’m used to wood rats being near trees and large shrubs and building small towers of sticks for a nest. Saralaine said they find enough twigs here for nests and then often put cholla burrs all over the nest as added protection. Once she found a hollow statue of a woman being used as part of a wood rat nest with twigs covering all but three fingers. She rescued the statue which now resides in her house, sans wood rats, and which she has named “Our Lady of Three Fingers”.

We saw a cottontail rabbit and she said there are jackrabbits. I’m assuming with rabbits and wood rats there are probably foxes and coyotes as well. And we were assured that she frequently sees rattlesnakes. Her bird feeder provided me with a new bird sighting of a canyon towhee and several Gila woodpeckers. She told us that Gambel’s quail come in to feed but they didn’t put in an appearance while we were there. Nor did we see a roadrunner that is in the area. A mourning dove was nesting in the sconce by her front door. Water is essential for life and she had a little pond and other water for the desert creatures.

A number of cacti were blooming along the roadway but I could identify only those I photographed and looked up after I got home. One has to be careful though. If you kneel down to take a picture you have to move cautiously in order to not get stabbed by thorns. It was somehow reassuring to see that our new friend was so comfortable with living in such a harsh environment and content with a natural, desert landscape.