This has been a week I’d just as soon not repeat. Monday, Bob left for Bakersfield, not to return until Friday morning. I took the VW bus down to the Shell station for a tune up. Was on the phone off and on all ay concerning problems with it. Finally I walked downtown with Clarke and Jeff and we met Rebecca at the hardware store where she’d walked from her music lesson. It was raining that morning and Bob had picked us up from the Shell station –he left for Bakersfield around noon. Shell Station picked us up there in the VW and we rode back to drop him off and then home, barely making it as there was no compression in one cylinder. He had put in new spark plugs and points but it ran much worse than it had when I’d taken it down. The next morning I couldn’t get it started at all. Clarke and I walked to Linda Lindsey’s and then I walked over to the nursery school—had called from Linda’s and was 15 minutes late. ”The nursery school day wasn’t too bad, considering how things had gone so far!” 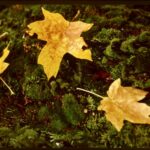 JoAnn Ferguson brought me home so I could drop off Rebecca’s new flute. I didn’t want to be carrying that around town. The man from Terry Music in Redding had come with the flute and papers to sign while I was at nursery school. When she was turning around in our driveway, JoAnn got her truck caught on our rotten gate because she cut the turn too close. Colleen Stewart’s little girl, Colleen, started crying. We got unstuck but when I went to get out downtown I couldn’t get out—the door was stuck closed because a bolt on the gate had bent a lip over the door. Walked up to the post office; bought some peppercorns, we’d been out for a week; ate lunch at Brown’s; bought some paperbacks at Greenwood’s (left the peppercorns there); around 2 o’clock walked up to Mathies’ where Jeffrey was having his piano lessons. We walked back downtown and fortunately met Doris who gave us a ride home. 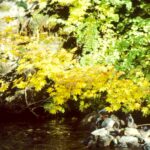 Wednesday I had an 8 a.m. appointment at the hospital for a test. Doris picked me up and dropped me off. She took Clarke home with her. After my tests I walked up to her house. It was very cold and cloudy that day but I didn’t like hospital atmosphere so was glad to walk. Doris fed me breakfast and then she and Clarke and I went out to Roundy’s to pick strawberries. They’d called and asked her if she wanted some. She and I each picked a large bowl and Clarke a small one. They live out Highway 3. Got home just in time to feed Clarke strawberries and milk before school. Doris had fed him an egg when she fed me. The bus was going by but the driver saw Clarke coming around the turn and so stopped and waited. I walked downtown and got the mail, had a cup of coffee, and walked home. I called Callahan’s. They taken the VW while I was gone that morning. Wednesday evening Barney called and said the car was running but we had a burned out valve. Thursday morning Barney and Larry brought the car up so I once again had wheels. 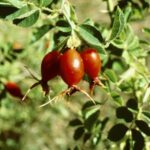 Candie and Carin arrived Friday and left Sunday. Clarke was sick for a couple of days. Bob and Candie and I stayed up late one night talking and drinking peach brandy. Late Sunday afternoon , after Candie had left, we went out to the ranch, stopping briefly at Florence and Leonard’s to drop off an anniversary card. When the clouds lifted for a time on Friday we could see snow way down on Weaver Bally, very early for that.

When we got out to the ranch I fixed dinner and we built roaring fires in both stoves. The next morning was foggy but gradually burned off. I took the children on the old trail that goes around the hill and into Big French Creek. It was a beautiful walk. All the leaves were damp, the moss on the trees feathery and everything smelled so good. Lots of poison oak but I hoped little sap was running. Got home and ate lunch. Picked some apples with Rebecca’s and Clarke’s help. Picked green beans. Went for a quick walk up the meadow but when I came back realized that, although the last time we were out I’d defrosted and cleaned the refrigerator, I’d neglected the freezer section and it had thawed and needed cleaning, so did that. 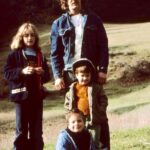 Sometimes it’s hard to be sure how accurate the dates are in these accounts. It looks as if Bob went to Bakersfield two weeks in a row. He was gone the week of all the car trouble, was home for a few days and then once again left for Bakersfield. He called from there to tell me that the work corporate wanted him to do was based on the plan he used for Weaverville two year ago and was pleased with that. 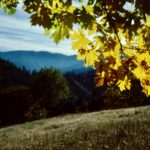 Did a lot of house work in town and waxed floors, declaring them “hazardous” afterwards. This was a Tuesday and he had left the day before. I stayed up too late, but did some things for nursery school and read a book that Doris had loaned me called “New Wives Tales”, by a pediatrician from Oregon and found it “interesting and humorous”.

The next time I wrote I referred to a previous weekend when we had gone out to the ranch. “Saturday was foggy, after a hard rain the night before, but the fog cleared in the afternoon. Bob and Rebecca went down to work at the creek. He paid her 10 cents a board to pull nails out of small boards, 20 cents for medium boards and 30 cents for large ones. Around 1:00 they came home. I’d spent an hour or so cutting wood.

At 2:30 Bob took all three children with him so I’d have some time to myself. About 15 or 20 minutes later the children were back. They’d gotten down to the creek and discovered that all the tires were flat on the boom truck and there was a hole through the windshield. Bob sent the children home and he headed up the road to try to catch up with whoever it was. He did find someone parked in a station wagon at the end of the road by Walden’s. The man said he’d been there since 12:30, hunting. We gave the license number to the sheriff’s office but there wasn’t much we could do.

A deputy was supposed to come up on his way back from Orleans and I left Bob and Rebecca and Jeff at the highway while I went to buy valve cores and see if Scoot Miller had an air pump. Florence remembered that they had something they used to use 20 years ago camping in their jeep. It attaches to a spark plug outlet and pumps the tires. So I borrowed that. Bob and the kids were still there when I got back. I drove down to Big French Creek but no deputy was there either. We finally all went home. Bob stayed down at the creek pumping up the tires. The boom truck ran out of gas and he had to come up and get more but eventually got the tires inflated and brought the truck up to the house. 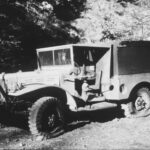 The next day we pieced together what we thought had happened. Someone was hunting deer up our road and came across the truck. He looked for the key (in the jockey box, under the seat, etc.). Tried to hotwire it but couldn’t get it started. Got mad and put a bullet through the windshield. Took some brushes off the portable generator. Took a spray can out of the truck and was about to spray on the abutments when Bob and the kids came down; hid under the bridge and dumped the tools he’d gotten into the creek right below the bridge. I found a spray can under the bridge and Jeff spotted a hammer in the water. We then fished another hammer and a nozzle out of that pool. The man in the car was probably his friend and, indeed, they may have started out hunting, although it’s a strange place to start from with all Frank’s signs. If our version is correct then that means the man was under the bridge when the children were heading home. (a scary thought even after all these years) 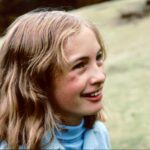 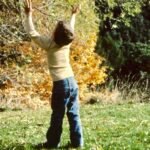 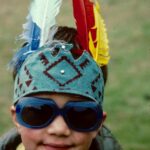