Went to Redding with Clarke, left the car at Hostetter’s VW repair shop. Doris met us there as she’d been shopping that morning. We went to the Stone Ground place and bought flour, etc. and then came home. Jeff had gone to piano lessons and then to Linda Lindsey’s. Rebecca had walked down to Bob’s office. Clarke and I got home at 5:00 and Bob brought the children shortly thereafter. 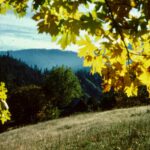 Friday we all went to Redding. Bob went down to a place where he could get generator brushes and we went to get some things—a Cub Scout shirt, hat, etc. for Jeff. Went to Sim Nathan’s and got rubber boots for the boys and new shoes for Clarke, tights for Rebecca. We got outside just as Bob was parking the car. We drove to the Shack and had dinner, then went to the VW place and got the VW. Got home about 8:30 with Clarke riding with their dad and the other two with me.

Jeff got sick Saturday and was ill for several days. I worked on Clarke’s Halloween costume all day. He was going to be a devil. It rained all day. Florence and Leonard got back from their fishing trip to Orleans that night. I called my mother on her birthday. She was practicing walking.

Jeanne Meyer and I took the kids trick-or-treating. We went to specific homes where they wanted to visit. Rebecca had gone to a birthday party for an hour at Amy Bancroft’s before that. Rebecca was a cat, Jeffrey a hobo, and Clarke a devil. There was a picture in an album, don’t know where it went.

Earlier that week Bob and I had gone to Redding to see the San Diego Ballet, part of the Community Concert series. 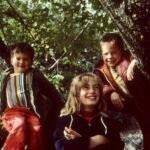 Got a walk in on Friday. It made me feel much better. It was foggy at first but cleared off later and was a beautiful day. “The forest floor is damp and spongy and warm sun on the pine needles made them smell so pungent. I ate up on the hill where I often do although I had walked over as far as Garden Gulch and up the old road. Lots of yellow maple leaves in Garden Gulch. Oak leaves are turning yellow, and some red or amber, elsewhere. “

I bought some carpeting to put on the living room floor (gold with a brown cast), putting backing down first. The children helped. We hauled the carpet in through the rain and put it down. Bob helped adjust it when he got home. It really helped absorb the noise from the piano and the children enjoyed playing on it.

November 16: The children and I went out to the ranch Saturday afternoon. Had to throw a lot of rocks out of the road. Bob and John Scott were down at the creek. They’d built a ramp up out of the rock and gravel and had just about finished.

The previous Tuesday was a school holiday. That morning I took the VW down to the Shell Station and got the snow tires on and new chains. Walked home after leaving the car there. Did some chores and then walked back down and got the car and drove over to Ohde’s to get Linda. Rebecca and I left for Redding. We left the car at Hostetter’s for a valve adjustment and received a ride from them to Cypress Square. We ate lunch at the pizza parlor; bought shoes for Rebecca and me; took a cab down to the mall. We left a copy of Charlotte’s resume and outline of her book at Hyatt’s Bookstore (my sister-in-law, brother Richard’s wife, had just published her first book on economics), and Dicker’s. I bought some boots at Alpine Outfitters. Cashed a check at Dobrowskie’s (they recognized my maiden name! so were willing to do so.) We took a taxi back to Hostetter’s and then went to Lim’s for dinner. From there we went to see the Hislop’s for an hour and then back to town to attend a Community Concert Board meeting and then home. Got home around 11:00 p.m.

Jeff had a week of a lot of illness—fever, etc. A few days later Scott Lindsey and Clay Tucker came over (I picked them up and brought them) to play with Clarke and eat lunch. They caught the bus with him. 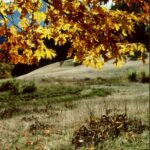 Leonard and Vernon Ryan took our truck over to Eureka to get more cribbing. Bob met them at Prairie Creek and they went up to our creek and unloaded the concrete cribbing. This weekend Florence and Leonard went to get the rest of them. They brought the truck up to the house and Bob and Scott (Morris) will unload them tomorrow. I had invited them to stay for dinner and Rebecca started peeling apples for apple crisp while I drove down to the store to get whipped cream, French bread and tomatoes and avocados for the salad. We had spaghetti and wine, root beer for the kids and Bob, and coffee with dessert.

We had Thanksgiving at Florence and Leonard’s. We left Clarke and Jeff there for overnight and brought Noel and Rebecca to our house. David A. got seriously ill that night.

Clarke’s class had their powwow the previous Tuesday and we attended; a yearly kindergarten event. Wednesday I baked bread and made up enough dough for the refrigerator rolls I took to Thanksgiving.

My dad was diagnosed with emphysema.

Saturday, December 6th: Bob was over at Ohde’s at 9:45 p.m. and the children were in bed. I had just watched the Mary Tyler Moore Show (“ I rarely watch T.V. these days.”). Clarke had been sick for several days. We finally got some wood. Bob had ordered it from someone in Hayfork. All they had was fir and about half of it was green but at least we had wood. We’re going to try to get some madrone from out at the ranch. “Two bearded men with longish hair but kind eyes, hauled it over, two pick-up loads at a time for $45 a cord. I made bread that day but managed to get almost two cords stacked in the woodshed. They brought their last load around 5:00 and I gave them the money plus a loaf of bread, which seemed to please them. One brought his wife, a full-bosomed, blond-haired woman wearing a long coat. They stood there in the light from the porch, smiling and looking as if they’d just stepped out of biblical days.” I was really tired and sore that night.

Doris loaned me a book called “Sexual Suicide”, which I read over a couple of days and was depressed by. It made me decide to scrap my lesson plan for the nursery school moms that week and we focused instead on the value of women in the home and in society, which ended up being very interesting.

An exchange of phone calls with Tom Quinn about the water board.

Bob went out to the ranch and did some culvert cleaning. “He looks awfully tired. Has been working until almost 7:00 every night at the office and some time on weekends. He has to make a 20- minute presentation next week on all that he has been working on for the last 18 months. He’ll be gone all next week.”

I got a letter from my mother saying something about Dana (my niece) having won a contest sponsored by McDonald’s and having played her clarinet in New York. She is also going to play in Pasadena in the Rose Parade. I think this was with the high school band. My mother could type only with her left hand after her stroke. She did amazingly well but this was still early in the recovery process.

The previous weekend I went out to the ranch with Bob because Scott wasn’t feeling well. This hadn’t been in my plans. Jane Hicks babysat. We left around 10:00.

“First we unloaded some 2x4s at the creek. Then we went up to the woods with the boom truck, leaving the white truck at the house. We went up to where the empty tank (galvanized, 12x 8 feet) was lying on its side on a wooden frame. It was cloudy and very cold. Bob rigged the tank and frame to the truck while I operated the winch. Then he pulled up the hill a way and started backing down. He wanted me at the front of the truck with the tank to tell him if it was clearing trees, etc. When trying to back around a turn he swung too wide in order for the tank to have clearance. He got too close to the side of the narrow skid road and a rear wheel started going off. He was really upset. Got out and began swearing and unhitched the tank. He asked me to tell him what the rear wheels were doing but that was no help. Every time he tried to back on to the road the front wheels slid further off and the back one continued to slide. Finally he tied the cable from the boom truck to a tree so he wouldn’t tip over. That didn’t help much so he took it off of the boom after backing directly down the bank so the truck was now perpendicular to the road with the front wheels at the edge. Then he winched directly from the winch and got back on the road. I was so cold that my big toe on each foot was senseless and my hands could hardly bend to unhook the chains from the tree. Then he hitched up the tank again and I guided by walking behind him down the road. When we got to the main road he took the tank off the frame and lifted it up again with the boom and drove out to the flat in the meadow. Then he turned around again and backed down to the house with me guiding. By then it was 4:00 o’clock. We got in the big truck, turned the heater on full blast and ate lunch. Including some of the smoked salmon Scoot Miller had given Boband hot chocolate. From there he backed down to the last big turn above the creek with my guiding (a blessing because it kept me warm) and then he drove frontwards down to the creek. We quickly laid 2x4s on the cement piers for a floor. Then rolled the tank up the incline to the platform. It was heavy and wanted to roll back down but we made it. Bob used the boom truck to set it upright. 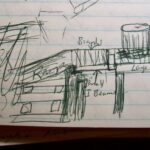 By then it was really dark. We went back to the house, put stuff away and drove to Big Bar where we called Jane Hicks and ate dinner at Big Bar Station. Got home around 8:00 p.m. Sunday Bob went back out to put the pipe into the spring, put some plumbing in and start filling the tank. .

The tank, full of water, would compress the fill soil at that end of the new bridge over the winter so that the bridge could be completed the next year.