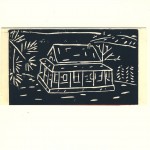 My husband said more than once, “This road wants to be a trail.” And it certainly did seem that way. The dirt road spanned four miles, with the first two, starting from the highway, slowly winding up the east side of a canyon. From the top of that ridge it was a mile down to the creek, mostly shaded, and edged by a steep, rocky hillside. After crossing the stream it was another mile to the house with more open terrain. Keeping the road passable meant brushing ceanothus on the east slope; cutting any fallen trees; maintaining the water bars so that storm water would run off the far edge instead of eroding ditches by running down the road; and periodically cleaning out slides and rocks. We got adept at a quick flip of the toe to clear smaller rocks when we were walking.

The day after my long hike to get to school it was snowing. Bob put chains on the VW but they were hitting the body because of the large snow tires so he tried wiring them onto the jeep. That evening, just before 5 p.m. I was driving the VW home and, just above where our nearest neighbor lived, close to the highway, there was an oak across the road. It had split in two and both pieces were blocking access. I backed up, turned around and called Bob from Big Bar, just before he left his office. I had a cup of coffee and a piece of pie while I waited for him. Big Bar is a tiny community but it had a good café, a small store and a post office. He cut the tree with an ax, that he must have purchased or borrowed, and we drove home. (Instead of calling and asking your spouse to stop for milk or eggs it was—bring an ax or saw!)

We both had the next day off, Veteran’s Day. He put in the last rafter upstairs and nailed some boards on the edge of the roof to keep the drip off the porch. Then went over to the oak tree, dragged it up the road and sawed it into pieces. I spent some time stuffing insulation in cracks between the logs downstairs. By Friday we had four inches of snow although there was none in Weaverville. From this storm we lost the top of the black walnut on the south side of the house and there were branches all over the ground. We also lost a chunk out of the English walnut at the top of the orchard.

Saturday was foggy but no storm. The trees were covered with snow and lovely. Bob cut wood all morning and in the afternoon wrapped the pipes under the house. I tacked black felt paper over the spaces between the logs and the ceiling upstairs and he put the third section of plywood on the floor up there. Sunday was clear and beautiful. The snow melted rapidly with a steady swish and splash from the woods around us as it fell from the trees. Bob worked on the tractor and the jeep most of the day. I hand-washed a few things, picked frozen apples from the tree by the woodshed and made applesauce. Then wrote a couple of letters and wrote up a test for the fifth grade. The temperature had dropped to 24 degrees night before. We had deer browsing under the walnut tree in the morning.

There was a school Christmas program the day before Christmas vacation started. Friends from the Bay Area, Julie and Bob Wilson, arrived on the 19th to stay for a few days. It was raining. On Sunday, Ted and Betsy Lewis and their two small children arrived from Berkeley, just for lunch and dinner. Bob Wilson and Ted were classmates of Bob’s at Stanford. We had put up a small Christmas tree decorated with strings of popcorn and cranberries. Still raining.

Monday, the 21st, Bob drove the VW into town to work and I drove the jeep in a little later to get groceries, leaving the Wilsons on their own. I could see that the river was quite high. That evening we decided to put their car on the other side of the creek. The next day we packed Christmas presents and two suitcases and left. Bob put the tractor on the far side of the creek and we left the jeep at the house. Our creek was about four feet deep and 20 feet wide and small logs were being washed down.

When we arrived at Prairie Creek we were met with water backed up on the road for about 50 feet. The culvert was plugged. I got out and waded in far enough to be able to tell that there were no holes and the two VWs drove through. The river was very high. We could see the center was higher than the sides, big muddy waves forming peaks, and large logs being rushed downstream. We could hear rocks cracking together in the torrent. Bob and I were entranced by the power of it all and stopped to look but our friends were really nervous and wanted to keep going so we did. At Eagle Creek water was washing against beer cans along the highway. At Junction City people were trying to plug up a large drain so water from the river wouldn’t wash through it into the community.

Bob got to work around 9:30. The Wilsons left in early afternoon to head for San Francisco. Florence, Leonard and I drove out to East Weaver (a small suburb of Weaverville) to take boxes out for the Howells, whose home was being undermined by East Weaver Creek. Many homes were ruined out there. The U.S. Forest Service was hauling furniture in their trucks to the Civil Defense Building (built in the days of civil defense concerns, now used for community events and known as the Veterans’ Memorial Hall). Then we drove to Junction City and watched the bridge across Canyon Creek collapse, cutting off traffic on Highway 299.

We spent Christmas with Bob’s parents, as did my younger brother, Richard, and his wife, Charlotte, who had planned to spend a rustic Christmas with us at the ranch but had arrived to find chaos instead. My sister-in-law and her husband and two children were already spending Christmas with them. I’ve never seized to be amazed at how much Florence could handle with caring for family!