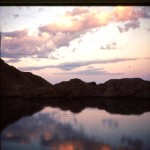 Having deadlines makes time go by very rapidly and the summer months with their good weather were speeding by. I used some of the yellow paint left over from when I’d painted the wooden part of the outhouse interior to paint an old shelf and moved it upstairs to use as a bookshelf. Washed all the windows. These were the original windows, complete with bubbles. Bob was making trips into town, when he had time, to bring back gravel and cement for the cellar.

We were able to squeeze in a couple more camping trips. We took the Corral Bottom road over hills and down to the South Fork of the Trinity. There were many clear-cuts along its edges on private land. The South Fork was a beautiful river that made me think very much of the Smith—big, deep, emerald-green pools. We ate lunch at Underwood Creek, where there was a suspension bridge over the river, and then backpacked downstream from there about a mile, crossing around one bluff where there seemed to be nothing to hold onto but poison oak. We camped on a gravel bar, went swimming, and then Bob succeeded in catching a fish.

The next morning, we had a hot fire going quickly, using dry driftwood. Our drinking water came from a little spring behind camp, very cold, that tumbled down a rocky grass-covered slope. It was a pretty spot with small yellow monkey flowers and a few ferns. During our brief stay along the river we saw water ouzels, a heron, sandpipers and a pair of kingfishers.

I began preparing for the school year, spending time at the school decorating bulletin boards, getting library books, etc. My mother rode from Modesto to Redding on the Greyhound bus and I picked her up there so she could visit for a few days. On one of our walks by the creek we saw a rattlesnake.

Bob continued to work on the cellar, getting longitudinal and horizontal rods for supports (rebar). He and I took my mother for a drive up Swede Creek. There was an old, beaten-up log cabin and a barn which appeared to be held up by only a cable, and a chicken coop. Back at the house she and I made ice cream while he worked on the cellar. After a couple of days I took her back to Redding to catch a bus home.

On August 25th Bob came home and said that a big fire was burning near Douglas City. Someone had set a total of five fires between Douglas City and Hayfork. Two joined together into one huge one. The next day I rode into Weaverville with him to attend teachers’ meetings most of the day. Wilma Smith, who taught at Douglas City, and I drove to look at the fire. It was burning hard on top of a ridge behind there with flames high above the trees and smoke billowing up. Borate planes came in and dropped their loads while we watched—swooping right in at the head of the fire–not borate but similar and pink. Many people had to evacuate. The radio said 7,000 acres and 1400 men on the fire lines. They had a fire camp on the flat below the school along the river and one at Deer Lick Springs.

School started August 31st and that’s all I said about it in my journal! But I do remember that during that year I had anywhere from 13 to 22 children, including several sets of siblings. There was a U.S. Forest Service station in Big Bar and I had a brother and sister from one family and a little girl from another. There were two brothers who lived on a small ranch. There was a brother and sister who lived a couple of miles up a nearby hill. And there were children whose parents were in the timber industry—some of them had to move away for part of the year, depending on where there was work. With five grades and no teacher’s assistant I sometimes had older children helping younger ones—or a line more or less patiently waiting for help.

I moved to Trinity County two years earlier, to teach grades 1-4 in a two-room school in Douglas City—no teaching credential, just a B.A. in Wildlife Conservation from UC Berkeley, with an English minor. My previous job had been working as a seasonal ranger-naturalist at Crater Lake. They were desperate.

As one school board member said when they hired me shortly before school started, “She sure doesn’t know anything about teaching.” The board member was correct but the upper grade teacher gave wise advice; I loved the job and the children, and they seemed to learn. I met my husband-to-be on a pack trip into the Trinity Alps that weekend. Later, when I went to San Jose State to get a credential (driving on the Bay Area freeways with my rural driving experience, knuckles white on the steering wheel), my requirements were cut in half because of the previous teaching experience. And I could tell, because of that experience, that some of my instructors hadn’t been in a classroom in a long time! 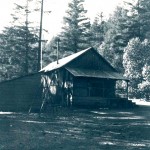 Cox Bar Elementary School had been in existence since the 1860s. The original school, about 16 x 20 feet, burned and was replaced before 1887, and was replaced again around 1922 by one a little larger. In 1870 there were 19 students but in 1894-1895 there were only seven. (information taken from the 1967 Trinity, the Historical Society Yearbook, in the article “Big Bar and Vicinity” by Robert J. Morris) I was lucky. My school was brand new (dedicated May, 1964) and quite modern, much larger, and had a tinted window extending all along one wall. It was roomy and full of light.

On Labor Day weekend we backpacked in to Lake Anna, via Bowerman Meadows. It was steep toward the end but otherwise no problems. We had the lake to ourselves and enjoyed a beautiful sunset with pink thunderheads and a lovely sunrise. We saw a porcupine swimming in the lake in the morning. It was quite cold though. The second day we hiked as far as Van Matre Meadows and ate lunch at Echo Lake. We camped up where springs start from under a huge rockslide. One of the most beautiful campsites we’ve seen. Again, we had it to ourselves. The next morning we hiked out and down Red Mountain to where Bob’s mother, Florence, had left our car. A perfect trip except for the cold and the lack of sleep.

This was a fall for relatives coming to visit. My parents arrived on September 25th and stayed for the weekend. They were traveling around the countryside looking for possible places to retire. In early October my eldest brother and his family arrived. My brother helped Bob haul some pipe and I went with his wife and two small children to see the school and then to get the ingredients for ice cream. Bob’s Great Aunt Nell and her cousin came out for dinner on another day.

November was the start of realizing we really were dealing with some distance issues as well as the lack of a telephone. I was driving the jeep truck to work on school days and November 9th started out as usual. But down on the one small, flat area, about a mile from the house, the clutch went out. I had no choice but to leave the vehicle and try to walk to the school, which meant three miles more on our road and then a couple of miles along the highway. I began hiking as fast as I could and reached the highway in 50 minutes. I knew I’d be quite late and was really worried about the children. At that hour of the morning there was very little traffic on the highway. With the river to my right and the highway to my left I tried to keep up a good pace. But I was lucky. A U.S. Forest Service employee, on his way to work, saw me and pulled over. I was so grateful!