The Kamloops in Redding were interested in buying some of the old mining pipe (this is the pipe that David Adrian hauled for us shortly after we got married). Bob had built a hoist in the woods on a former logging landing and that’s where it was stacked. The goal had been to line the old water ditch that, years ago, ran from above the meadow quite a distance up the hill to the creek and was used for irrigation. The remains of the pond could still be seen at the head of the meadow. 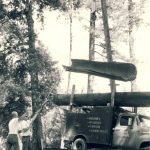 But he decided PVC pipe would be better—easier to transport, less maintenance and evaporation. George Costa, who was apparently mining again, was also interested in the pipe and Bob went to see George and Martha one day. Martha gave him a couple of peaches, two large onions, some greens and some squash, which he brought home.

One thing that surprised me was how I’d gotten into jelly making, Wild gooseberries grew in the flat where the pipe was stacked and Rebecca and I went up so I could pick some. Wild gooseberry jelly is delicious. I also made raspberry jelly from berries Florence had given me from her yard—the first jelly I’d ever made. Florence made raspberry pies and cobblers, nearly always present at family gatherings. There were wild raspberries at the ranch and blackberries, enough for snacking.

I think I was trying to preserve as much as I could from the ranch to see us through the coming year in town.

Barbara Austin was going take care of Rebecca while I taught 5th grade. JoAnn Peters was originally going to but she was expecting. Barbara’s husband, Jim, was the minister at Trinity Congregational Church.

In between working at his job and on projects at the ranch, Bob would help people with their stereo or other electronic problems. He made several trips out to the Trinity Lake area to help the Riordan’s with their stereo set up.

The “cellar” we were working on was actually just space under the back porch, dug out and leveled, where we were going to have a food storage cellar. We also eventually put our washing machine down there. Bob would get home late that summer fairly often because, after work, he’d pick up a load of gravel for the cellar. We built a rock wall against the back and ends but then poured cement behind it. I tamped it while he was pouring and helped with putting rocks into the cement.

Family: My younger brother, Richard, who was in the Navy, was going to be stationed in Washington D.C. Alice Jones hiked into Deer Creek and saw Peter and Angenett, their children and the other couple. They were apparently doing fine but the cold weather had been hard on them

One day Bob came home with a battery, which he hooked up to the generator. Then he put a 50-watt bulb in the lamp and put another lamp upstairs. It was really nice! When the generator was off we could still use the lights because of the battery.

We had people come for dinner more often than I’d remembered. One afternoon Bob drove down to Prairie Creek to meet Vivian and Elsie Tye, so they wouldn’t have to drive on our narrow road. Bob had bought the ranch from Fred and Elsie Tye and Vivian had grown up out there. Elsie brought some of her old pictures of this place and the upper ranch and people.

Occasionally I’d have a “what a day!. July 19th was one of those—I tried canning applesauce. Got one jar ready but a second one was about an inch short. I had the water all ready to boil, then noticed no flame under the pan, no gas. Fortunately we weren’t clear out—the valve on one tank was turned off. I turned it on and then scurried around lighting pilot lights—stove, hot water heater and refrigerator (found a very old dehydrated, dead mouse under there). A sonic boom occurred while I was trying to light the refrigerator. For half a second I thought one of my efforts had blown up!

Meanwhile the washing machine kept stopping and having to be started. Rebecca woke up so we ate and then I finished the laundry.

In the afternoon she played out on the porch while I sat hemming a dress with my bare feet hung over the edge of the porch. A hornet (maybe it was a bee) got stuck between two toes and left its stinger. I yelled. Rebecca cried. My whole foot swelled up and it was quite painful. I hobbled around, and the next day still couldn’t get my shoe on. 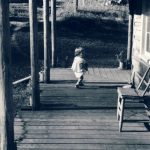 Horace and Alice Jones and Brenda (a niece I think) came for dinner. After we ate, Alice and Brenda washed the dishes. Horace unloaded Bob’s gravel and Bob cut up a walnut branch for Horace, who built beautiful wooden things in his shop at their home in Weaverville. Horace brought a wooden lawn mower he had made for Rebecca. It had wooden balls inside of it.

During the time we were at the ranch I couldn’t do ironing because there wasn’t enough electricity. Diane Mortimeyer and her mom, Fran, and dad, Lawrence lived in Big Bar, and we paid Diane to do the ironing. She always did a great job. Every now and then I’d stop in to leave or pick up some ironing and visit for a while. I noted that the last visit I’d taken down refrigerator rolls for them.

On July 30th we headed north on a last vacation trip for the year, driving over the International Paper Mill Road. I noted it was “a pretty drive but a shame to scar up the country with it and provide such close access to Deadfall Lakes.” We stayed the first night in Klamath Falls and the next day drove to Crater Lake where we saw and talked to Ed Paine and Ted Arthur and families. Both of them were seasonal ranger- naturalists when I worked there. We were on our way to see my eldest brother, Ben and family, at Mt. Rainier, where he was a ranger.