It was dark as I left my tired, cranky spouse in the car and crossed the parking lot to enter a store in the town of Tuba, Arizona to ask whether there was any kind of trailer park in town. The clerk 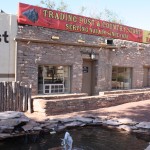 , who may have been just as exhausted from a day of work as I was from our long day on the road, noticed that I wasn’t even writing her directions down correctly. “I’m so tired I can’t see straight,” I said.

She gave me a measured look, took the piece of paper she’d given me when I’d said I needed to write it down and drew a line sketch of the streets. “Go back out onto this street, make a right and then go past the second stoplight and turn left; there’s a Quality Inn there and the RV park is behind that. There are only two stoplights in town,” she emphasized.

Back I went to the car, clutching the paper. We’d been on the road since the Grand Canyon, traveling along Highway 64 and steadily losing elevation. We had seen the Little Colorado River Gorge to our left with layer after layer of shades of tan, brown and red on vertical cliffs. At various scenic, and not so scenic, turnouts there were little Native American markets selling jewelry and other items, some closing as dusk deepened. We could smell fresh rain on pavement. At the sign for Cameron, we headed north. Cameron seemed to contain only a trading post and a restaurant. Just past Cameron were strange earthen mounds along the highway. This area seemed quite desolate with trailers and shanties scattered about as we went through a Hopi reservation.

We arrived in Tuba at around 9 p.m. on a Sunday evening. We’d had nothing to eat since breakfast except nuts and the bottle of orange juice that we had shared at the Grand Canyon in midafternoon. After one false try from turning one street too soon we registered at an office in the motel and then drove slowly through the very dark RV park. Apparently everyone there had already gone to sleep. We hooked the trailer up to electricity. The restrooms were accessed by using card keys like one uses in a motel. We also had to pay a $5 deposit for a little socket wrench to turn the water on by the trailer. That was a first! Then we walked around to the front of the motel (their nice restaurant had already closed) and, along with a group of young men (Portuguese perhaps?), we crossed the street to a McDonald’s. I think we both would have eaten anything that someone else cooked by that point. We each had a fish sandwich, a small strawberry shake and a lot of iced tea.

Back at the trailer it was very hot and muggy and sweat was just pouring off. I finally turned on the ceiling fan—bliss! I had no idea it was on full blast and noisy. Tom got up after while and turned it off because the noise was keeping him awake but at least it had cooled things down some and as lightning flashed off in the distance the wind picked up, cool air came through the screened windows and I could get a little sleep.

The next morning I woke before 6:00. It was light outside and getting warmer. I put a tablecloth on a table in a shaded empty site. The trailer park had some trees and wasn’t nearly as desolate as it had seemed the night before. The restrooms were older but clean. Doves cooed constantly there as they had through much of our journey. I sliced a peach we’d brought from Branson and half of a banana for fruit to put on the hot cereal I’d fixed in the microwave. We had that and orange juice.

My social husband was chatting with someone in a nearby site and I went off to look at the Navajo buildings that were right next to the Inn. He discovered that our nearest neighbor was an anesthesiologist from the state of Washington who was working there on a temporary basis and that another man in another site was an internist who was also from Washington. The anesthesiologist was puffing on a cigar.

It was getting very warm so I hurried over to the Navajo museum area, camera around my neck, notebook in hand. The two museums were closed but there was a pathway marked with interpretive signs that I began to read. A moment later I noticed a figure standing beside me. She was shorter than I am, over 50 years old, no doubt Navajo. We chatted for a few minutes. She tried to tell me about Navajo history in the area but her knowledge seemed a bit sketchy. I heard a loud knocking on a window from the Trading Post behind me. She glanced that way but continued to speak. Soon it was apparent that she was asking for money. I didn’t have my purse with me and should have let it go at that but she was persistent, saying she was really hungry.

“I’ll get something,” I said heading back toward the campsite to get some money.
“Be sure it’s Chicken McNuggets” she called after me.
“I’m not buying you food,” I answered, “I’m getting some money so you can buy food.”
I gave her $3.00 and thought, “Well if she’s being that specific, maybe she really IS hungry.” I also decided that the knock on the window must have been someone who worked at the Trading Post trying to tell her to stop bugging the tourists.

Some of what I gleaned from the interpretive signs: The Navajo called themselves Dine and they believe there are two classes of people: The Earth People and the Holy People. The Holy People are spiritual beings—they cannot be seen but can help or harm.
Navajo needs for growth include four values: life, work, social/human relations and respect/rev 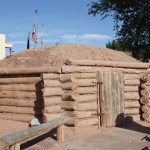 erence.
Corn is an important part of Navajo prayers, the most basic medicine and food—divine.

One of the two museums features the Navajo Code Talkers. The Code Talkers, who came up with a code that the enemy couldn’t break, were vital to U.S. efforts in World War II. http://www.historynet.com/world-war-ii-navajo-code-talkers.htm The last Code Talker died in June of this year. 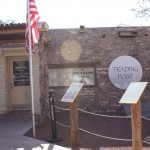 In 1956 Tuba was a uranium boomtown. Three hundred tons of uranium and vanadium ore were processed daily. In 1960 the uranium mill went bankrupt.

It is the Navajo Nation’s largest community. The town was named after a Hopi leader, Chief Tuuvi. who became a Mormon in 1870. Mormon settlers arrived and settled and then claimed all the land and water in Moenkopici Creek as their own.

The Trading Post, which was open, contained numerous handmade Navajo arts and crafts and I enjoyed walking slowly through and admiring them. I thought it a bit ironic that the young woman behind the counter had eyes only for her I-phone. The trading post was first opened in 1870 by Charles Albert. From the 1900s to 1910 one sack of wool was worth #3-$4 dollars. Teddy Roosevelt stayed at the post in 1913 when returning from a mountain lion hunt on the rim of the Grand Canyon. Later the trading post was owned by the Babbitt family until the Navajo Nation purchased it in 2000.

Disputes between the two tribes over thousands of acres in these pinon pine- studded, desert landscapes have been ongoing for over 100 years, stemming from a land allocation made by President Chester A. Arthur in 1882. http://articles.latimes.com/1993-10-17/news/mn-46610_1_hopi-land  Other information near the museums included the fact that in 1966 the U.S. Commissioner of Indian Affairs, James Robert Bennett, imposed a ban on new construction, water and electrical lines on large tracts of land unless it was approved by Hopis. Although this didn’t apply in Tuba, it restricted progress for the Navajos. The Hopi tribe opened a large commercial complex across the street from the Navajo Museums and Quality Inn in 2008. 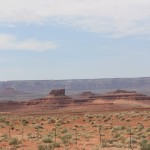 After returning our socket wrench, we left Tuba and began driving through sagebrush flats and again going past mesas that paralleled the highway. We crossed into Utah where bluffs were like sculptures in brown with beige washes in between. In Bluff, Utah we saw a Green Tortoise bus—those who are from the West Coast will understand our brief moment of recognition! Have never ridden one, not my kind of travel preference, but I guess it’s an adventure.